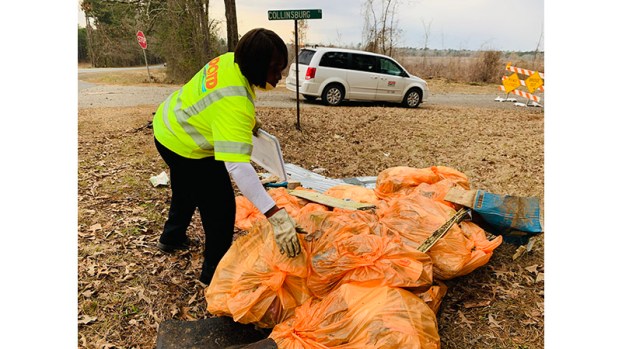 The Louisiana Department of Transportation and Development is picking up what someone else is putting down – litter. And lots of it. DOTD recently implemented a new policy for field crews to pick up trash in the footprint where they’re working for the day. This has resulted in dozens of bags of litter and other debris cleared, even in small areas, on a daily basis. The campaign is called Take 10 and DOTD crews that are out on a site will take 10 minutes to pick up litter daily.

Along with being unsightly, picking up litter is costly. DOTD spends approximately $9 million per year on this effort, which includes mowing/litter contracts, sweeping contracts, municipal agreements, sheriff’s office agreements, and in-house removal costs. This money could be used to overlay dozens of miles of roadway.

Litter also washes into our lakes, bayous and other waterways, which is not only unattractive, but it can also be deadly for wildlife. Often, this trash will clog the drainage system and lead to flooding of streets and homes.

Now, DOTD is issuing a challenge to local municipalities (cities and parishes) to implement the same policy for their field crews. Whether it’s patching potholes, repairing guardrail, or applying roadway striping, DOTD employees are removing trash and debris in their work areas each day and we’re asking that local entities who are not already doing this to consider doing the same.

“I try to never ask anyone to do anything that I’m not willing to do myself,” said Dr. Shawn Wilson, DOTD Secretary. “I know I’m asking my employees to stop doing necessary maintenance work for 10-15 minutes a day to remove trash that should’ve never been put there in the first place. But my long-term vision is to get to a point where this policy is no longer necessary, and that we’re no longer spending millions to help correct a 100% preventable problem. For the local entities that may already be doing this – I say ‘thank you.’ And I challenge the others to join us in the fight against litter to help keep Louisiana beautiful.”

The goal is to improve the communities where we work, play and live, but governmental agencies can’t do it alone. We also need commitments from the general public to not litter in the first place, as well as to pick up trash when you see it and when it’s safe to do so.

To report littering or dumpsites, call 888-LITRBUG (888-548-7284), which is the Louisiana Dept. of Wildlife & Fisheries’ anti-litter hotline. Keep Louisiana Beautiful, our state’s Keep America Beautiful affiliate, can help you become involved in clean-up efforts in your community.

DOTD’s Adopt-A-Road program also offers groups an opportunity to make a difference in their areas through the adoption of a particular roadway and support for ongoing clean-up operations. More information on that program can be found by clicking here.

Information on existing litter laws and consequences can be found here.

Congratulations to Trooper K-9 “Jack” for a job well done this past week. “Jack” assisted Troopers with a traffic stop... read more