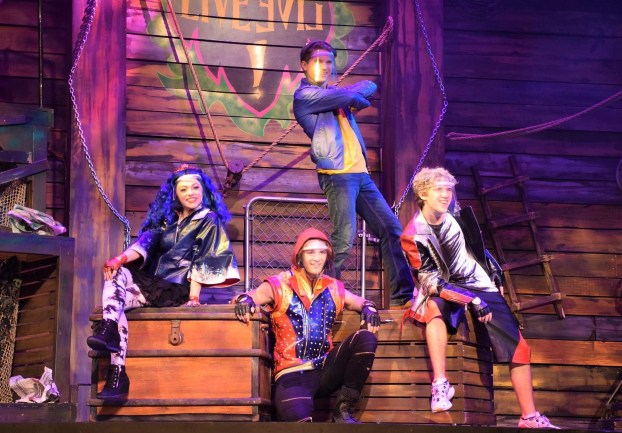 Intermission is over: Locals star in ‘Descendants’ at Rivertown Theaters

KENNER — River Parish families can see some familiar faces in musical comedy “Descendants,” wrapping up this weekend at Rivertown Theaters for the Performing Arts in Kenner after a 21-show run.

Due to the uncertainties surrounding the COVID-19 pandemic, several roles were double cast. However, many of the performers committed to 21 shows, with two performances per day. One weekend included three shows in a single day to accommodate capacity guidelines while sharing live theater with as many people as possible.

Based on the popular Disney Channel original movie, “Descendants” is a musical comedy follows the children of the infamous Disney villains. All is well in the Kingdom of Auradon, where Disney heroes and royalty are living happily ever after. That’s until Ben, the teenage son of Belle and King Adam (formerly the Beast) offers redemption to the children of the evil villains. Mal, Evie, Jay and Carlos, children of Maleficent, the Evil Queen, Cruella De Vil and Jafar, are invited to attend Auradon Prep alongside their parents’ sworn enemies. Before them lies a choice: walk in their parents’ footsteps or side with the good guys.

The show is directed by Kelly Fouchi with Rivertown Theaters.

Rivertown Theaters for the Performing Arts has implemented COVID-19 procedures and policies to keep performers and audience members safe. HEPA filters have been installed throughout the theaters, and all AC units exceed minimum requirements for hourly return and intake. Spaces are thoroughly cleaned after every performance.

Audience size has been limited to adhere to all social distancing guidelines. Temperature checks are also administered upon arrival. Audience members are asked to take advantage of hand sanitizing stations and move directly to their assigned seat once doors open.

The cast for each version of the show is as follows:

Families or friends who plan to sit together should have one person purchase tickets for the entire group. Tickets ordered separately will automatically be separated for social distancing.

Next up at Rivertown Theaters for the Performing Arts will be Nunsense, showing from April 8-18.