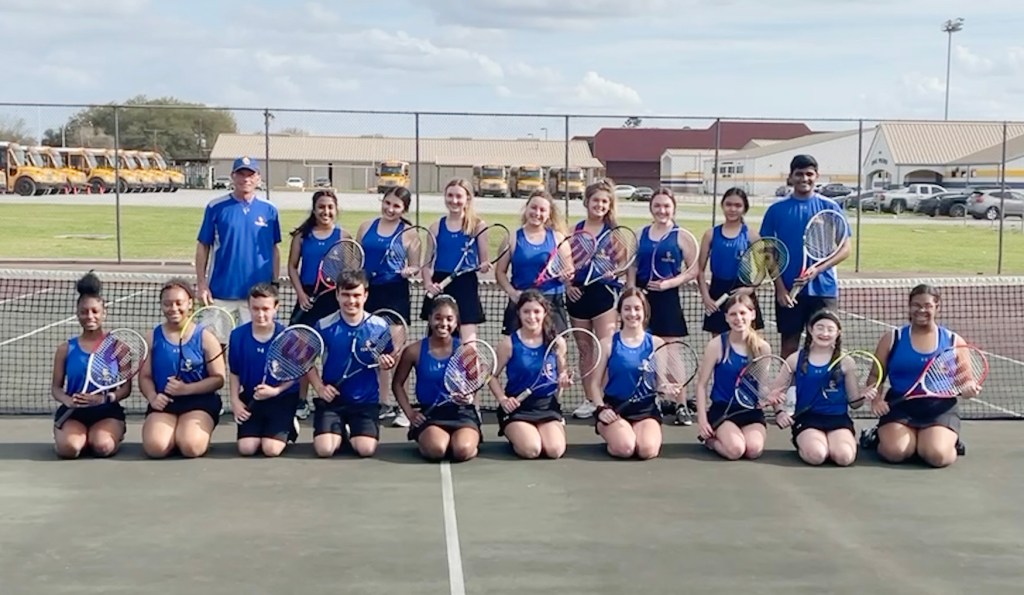 LAPLACE — The first day of practice marked the first time many members of the St. Charles Catholic tennis team picked up a racket. Where the team lacks in experience, they make up for it in spirit, and volunteer coach Ken Massett is excited to introduce the teenagers to a sport they can enjoy for the rest of their lives.

Massett was introduced to tennis when he was a college student attending Georgia Tech University in Atlanta. His wife’s uncle got him started with the game. Decades later, Massett usually plays two or three matches a week with friends.

He and coach Erin Remondet are now tasked with teaching the fundamentals to a Comets team primarily composed of newcomers.

“We have a very inexperienced team, so we are trying hard. The kids are having fun, and they are learning a lot,” Massett said. “Some of these kids, when they first came out, couldn’t even connect the racket to the ball. The first day of the season, they might have been able to hit 10 percent of the balls. Now I’ve got them hitting just about all of the balls. They are at least building the hand eye coordination and making contact now. We’re slowly trying to develop their skills so they can have fun on the court.”

The most important skills to learn, according to Massett are to keep your eyes on the ball as it hits the racket and to move your feet in the right position to hit the ball.

Another challenge to developing players is competing with other sports and extracurricular activities. Several team members had to miss the first month of tennis practice while soccer season wrapped up. There are also girls dividing their time between tennis and the Starsteppers dance team.

This year’s tennis team consists of 15 girls and only three boys. The official scoring for a game takes the results of two singles and two doubles for girls and boys. While only two of the doubles matches count toward the results, all of the girls get an opportunity to compete on the tennis court.

“It’s not like schools in New Orleans where they grow up playing tennis. When we play other schools, they play against people who have been playing for a while. They go out there, and they get excited when they get a good shot,” Massett said. “When we played East Ascension, quite a few of them won their first match. I do have some competitive girls who have some good talent and are going to develop into tennis players that will be able to compete.”

Senior Sajel Patel is a very competitive player who has won several matches and lost some close ones. In the Feb. 23 season opener against Archbishop Chapelle at Belle Terre Country Club, Sajel came out on top in singles. Sajel and SCC senior Miranda Hotard both saw success in singles during the second match against Chapelle on March 4.

“Some other girls coming along are Katherine Bergeron, Brooke Forsythe, Karen Trichell and Dominique Johnson,” Massett said. “They are doing well hitting the ball and will continue to develop with practice.”

Senior Ishan Ayer brings experience to the boy’s games, according to Massett.