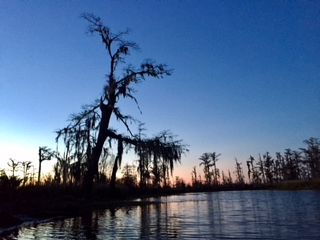 LAPLACE — With the COVID-19 pandemic bringing new focus to outdoor adventure, the 26-mile long Manchac Greenway stretching from LaPlace to Ponchatoula is the perfect place for locals and visitors alike to paddle, fish, run, ride and enjoy the Louisiana cypress swamp.

Bicyclists are invited to participate in the Manchac Greenway Swamp Ride to show off the newly resurfaced low road. The Swamp Ride will take place from 8:30 a.m. to 11:30 a.m. Sunday, April 18, starting and ending at Bec’s at the Lake Restaurant and Catering down Peavine Road in LaPlace. The 15-mile ride will reach Ruddock and circle back to LaPlace.

Helmets are required, and the $25 entry fee includes bottled water throughout the event and jambalaya and white beans after the ride. The entry fee also includes a ticket into a raffle for a chance to win great items such as helmets, cell phone clips, gloves and elbow pads donated by Will Barrera and East Bank Cyclery in Kenner. Additional raffle entries may be purchased for $5 each.

All proceeds from this event will go to The Friends of the Manchac Greenway Foundation, according to board member George Becnel.

“We’re working on eco-tourism and just shedding light on the resources of the 26-mile Greenway. We just got a grant from Entergy in late 2020, so we’re developing a plan going forward,” Becnel said.

Plans involve improving the safety of a launch site that kayakers use near the 4.5-mile mark. Friends of the Manchac Greenway also hope to improve the landscaping and maintain parks near the middle of the Greenway that could be used as nice picnic areas.

“We’re trying to get the Tourist Commission involved in promoting all the natural beauty out there,” Becnel said. “The new road is paved all the way to Ruddock now, and we have two public boat launches on the Greenway, one in Frenier Village near the restaurant and one at Ruddock.”

The Manchac Greenway is important to Becnel as an avid biker. Shoulder improvements have created a safer environment to cyclists who travel along the road. Becnel is also a history buff who recognizes the significance of the Greenway.

The beginnings of the Manchac isthmus and Lake Pontchartrain trace back 3,500 to 4,000 years, as the Cocodrie and St. Bernard deltas built sediment eastward through the future River Parishes. Lake Maurepas formed approximately 2,000 to 2,500 years ago. For thousands of years, the isthmus was the backdrop to Native American occupation and, later, colonial exploration and settlement.

By 1860,construction of the New Orleans, Jackson and Great Northern

Railroad opened up a world of commerce to the area. The North Pass and South Pass of Manchac were utilized in conflicts during the Civil War.

According to Becnel, The Manchac Greenway played a role in the rebuilding of Chicago after fire tore through the heart of the city in the early 1870s. Since the swamp was filled with cypress trees, crews would run a cable out, cut the trees down and pull them with that cable back to the barge to ship to Chicago. In an aerial shot, you can still see the lines where the trees were pulled through the swamp, forming circular “pinwheel” patterns that have persisted for 150 years.
“The Greenway has a lot going for it,” Becnel said. “It doesn’t get any finer in St. John Parish than when you have plantation homes, amazing restaurants, amazing culture. You’ve got a zip line opening soon. It’s a part of St. John Parish that literally pulls money off the Interstate, pulls money from New Orleans.”

For more information, visit manchacgreenway.org or find updates on the Swamp Ride on the Manchac Greenway Facebook page.