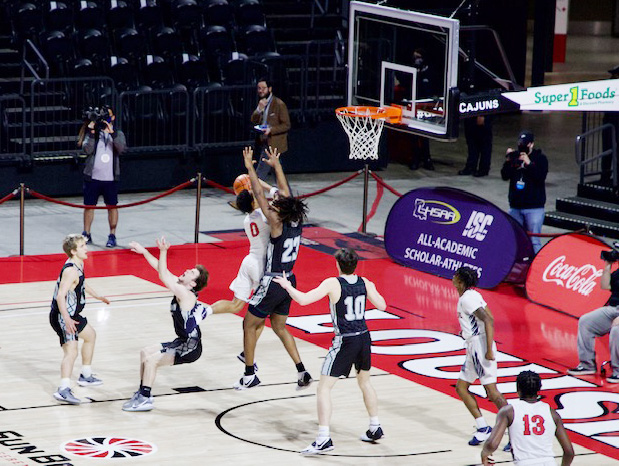 LAFAYETTE — Riverside Academy’s Gage Larvadain scored 35 points when the Rebels traveled to the Cajundome to face Calvary Baptist in the Division IV basketball semifinals Monday afternoon, but it wasn’t enough to secure a ticket to Thursday’s championship game in Lake Charles.

Riverside Academy, the No. 2 seed, fought hard and fell 67-63 to the third-seeded Cavaliers, who were led primarily by Daniel Otiz and Martin McDowell in the semifinal game. Calvary Baptist will now advance to play top-seeded Crescent City in a rematch of the 2020 championship game.

Riverside Academy Coach Timmy Byrd was pleased with the effort he saw on the court.

“I thought our team played extremely hard. They were well prepared. They executed the game plan, but because of early foul trouble, with three starters on the bench, we had to improvise and change things throughout the course of the game,” Byrd said. “That put us in a jam. We had to go deep into our bench. We had to play nine guys, and it’s very difficult to win a semifinal or final game when you have to play your bench for more than a half.”

Riverside Academy ends the season with a 13-8 record following playoff wins against Highland Baptist in the regional round and Opelousas Catholic in the quarterfinals. Calvary Baptist collected more wins than Riverside Academy during the regular season, though the Rebels had a slightly stronger power ranking based on strength of schedule.
Riverside senior Gage Larvadain has averaged more than 27 points throughout the season. He rose to the challenge Monday afternoon in Lafayette, securing six rebounds, six steals, four assists and going 17 for 18 at the free throw line. He also had four fouls called against him, including one in the final minutes of the game.

“Gage Larvadain put his team on his back,” Byrd said. “Even without a lot of starters on the court, we were tied at 35 seconds left to go. We just fell a little short.”

It was anyone’s game at the half, with Calvary Baptist up 26-24 over Riverside Academy.

The court heated up in the third quarter as Larvadain sunk two three-pointers, but the Rebels still trailed Calvary Baptist.

The heart of the game was truly in the fourth quarter, where Larvadain scored 19 of his 35 points. With less than three minutes left in the game, Larvadain hit two free throws to tie the game at 55-55. The game was tied on three different occasions, with the Cavaliers always recovering the lead.

Calvary Baptist’s Daniel Ortiz sunk a lay-up and made four free throws during the final stretch of the game to secure the win.

Larvadain led in scoring with 35 points for Riverside Academy, while Ortiz and Martin McDowell led in scoring for Calvary Baptist with 18 points and 16 points, respectively.

While Riverside Academy wasn’t able to win the Division IV championship, seniors Larvadain, David Reynaud, Andre Murphy Jr. and Tairyn Lockhart are ending the season with a lot to be proud of.

“I’m really proud of our team. Andre Murphy did an incredible job on the defense. He was a steady rock for us for the second half of the season,” Byrd said.

During the semifinal game, Murphy was delegated to the task of shutting down Calvary Baptist’s best player. He still managed to score eight points while playing a strong defense.

“My four seniors gave us everything they had. David Reynaud played really well for us throughout the season,” Byrd said. “Tairyn Lockhart was a great player and a joy to coach. He’s going to go on to do great things because he has a 4.25 GPA and already has 24 college credits that he’s graduating with. He’s going to go on to get a full scholarship to either Harvard, Baylor or Penn State.”