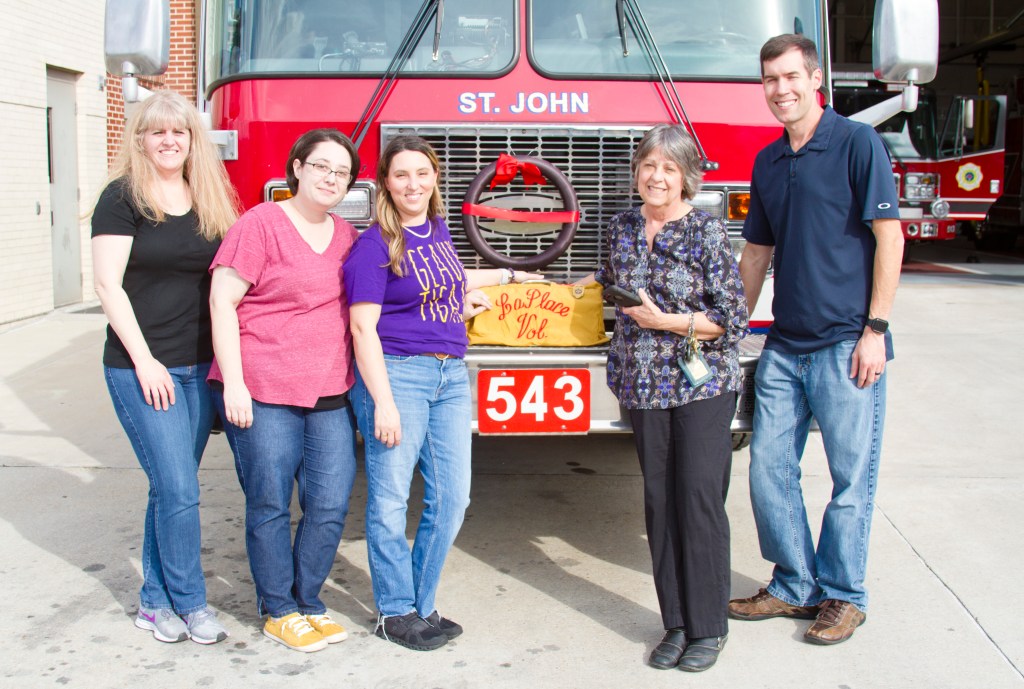 LAPLACE — Frank E. Fagot was a pillar of the community, the creator of the Andouille Festival and Pageant, owner of Allied Express and a dedicated volunteer firefighter of 60 years. His presence was larger than life, and his send-off was just as monumental.

The St. John Parish Fire Department and the St. John Parish Sheriff’s Office came together pick up Frank’s remains and bring him home for “One Last Ride.” A procession headed from the Lake Lawn Metairie Funeral Home to Station 51 on Hemlock Street in LaPlace Saturday afternoon. Inside the fire engine, the toolbox containing Frank’s remains was wrapped in the yellow firefighter uniform that he wore for so many years while valiantly serving the public.

Frank passed away at the age of 80 on February 12, 2021 at Kenner Regional Hospital following a battle with COVID-19. Those who loved him will fondly remember his legendary sense of humor.

Someone else could tell the same joke without it landing right, but Frank always had perfect comedic timing, according to his wife, Laura Petersen Fagot. Even though his size could make him look intimidating, he was a big teddy bear with lots of love to give.

“He lived an amazing, full life. He was so easygoing. Nothing fazed him,” Laura said. “I think it was because of his years with the fire department. You become used to assessing things that go wrong quickly, and you can’t panic. For him, it was the way he handled everything in life. He didn’t panic.”

Laura wonders how many lives Frank saved during his six decades with the LaPlace Volunteer Fire Department. He became vice president, president and served as Fire Chief from 1970 through 1984.

Frank’s father, Emmett L. Fagot, started the local fire department, according to Laura. In the early days, calls would go to Emmett’s home on Elm Street. His wife, Helen Doris Bechtel Fagot, would answer the phones and then make calls to dispatch the volunteer firefighters.

Frank continued the tradition and served on the Board of Directors for the LaPlace Volunteer Fire Department for 40 years. He also served as the Deputy Director of the Civil Defense Department, which was later changed to the Department of Public Safety and Preparedness. After being appointed Fire Safety Officer, Frank was in charge of all volunteer fire departments in St. John Parish during major disasters.

Mark Maurin got to know Frank well when he started working at the LaPlace station around 2001. He remembers that Frank always had a joke and never turned down free food. In fact, he could often be found snacking on hotdogs and popcorn at the Rainbow Chevrolet dealership on Airline Highway.

Frank was also involved in the community through the St. John Business Association and the River Region Chamber of Commerce since the inception of both groups.

In 1987, Frank opened Allied Express in LaPlace. The business is in operation today inside the Riverlands Shopping Center, and Frank was still working there at 80 years old, up until his passing.

Allied Express employees Heather Billings, Melissa Gray and Erin Wheelis were like surrogate daughters to Frank. He loved sharing life advice, souvenirs from his travels and, of course, his love for the LSU Fighting Tigers.

Allied Express employees also remember how fondly Frank would talk about his family, especially his sons Kevin and Brian Bechtel.

Brian Bechtel said Frank was “a good dad and a good role model.” Through his dedication to public service, he became a patriarch to the entire community.

Laura rode behind the fire engine during Saturday’s procession. She is grateful she met Frank all those years ago when she was working behind the counter at Gibson’s. Frank kept visiting the store until they got to know each other better, and their relationship turned into a beautiful 40-year-long marriage.

Laura said a celebration of life will be held at a later time when people are able to safely gather.