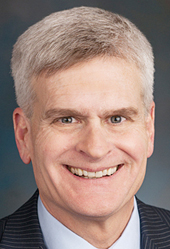 “As a doctor who worked in Louisiana’s charity hospital system and now a senator, providing quality health care to underserved communities is a priority,” said Dr. Cassidy. “Universities like Xavier in Louisiana are doing great research to address minority health disparities. This legislation supports their efforts.”

The John Lewis NIMHD Research Endowment Revitalization Act was introduced by the late-Rep. John Lewis (D-GA) in the 116th Congress. The bill would allow the National Institute on Minority Health and Health Disparities (NIMHD) to resume providing grants for critical research into minority health disparities. The Research Endowment Program at NIMHD provides funding to the endowments of academic institutions across the country, such as Xavier University of Louisiana, College of Pharmacy.

The goals of NIMHD’s Research Endowment Program include:

Because of funding shortfalls, those endowment grants began to slow and schools that had received NIMHD grants for 10 years were no longer eligible. As a result, the critical research being done at these institutions was underfunded. This bill allows those school to resume their eligibility.