Wildcats end season in 1st round of playoffs 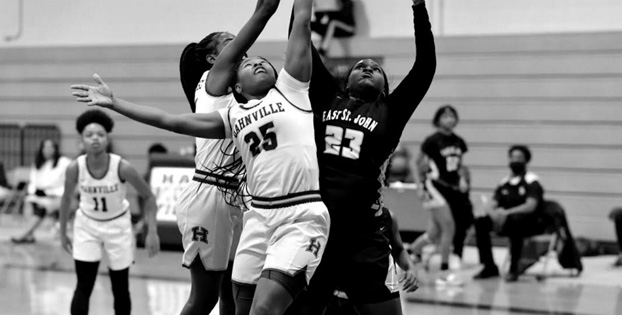 GRAY — The East St. John Lady Wildcats 43-46 fell in the first round of the Class 5A Playoffs as they traveled to H. L. Bourgeois on Feb. 19.

The Lady Wildcats went into the bracket at the 22nd seed against their district opponent, H. L. Bourgeois, who went in as the 11th seed. This was the third meeting against the two teams, having played and split wins in the district. East St. John had taken third place in the district and H. L. Bourgeois had taken second in the district. Both teams came out fighting from the jump and the Braves started off strong as they took the lead early on in the first quarter with a 7-14 score. The Braves kept consistent pressure on the Lady Wildcats in order to maintain their lead. Both teams traded baskets; however, the Lady Wildcats fell victim to turnovers and fouls early on, that would come back to haunt them later in the game. The Lady Wildcats fought hard to keep the deficit to a minimum while the Braves continued to hold on to the lead in the first half with a score of 22-27 in favor of the Braves.

The Lady Wildcats had an amazing season this year and will be back stronger next year. Congratulations to all of the girls and their remarkable coach and best of luck next year!

In other playoff news, St. James’ Lady Wildcats fell in the first round as well to Ville Platte with a score of 55-44.