Voices for the voiceless 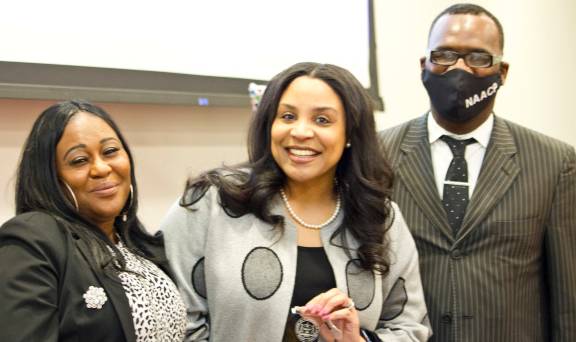 RESERVE — “When I was released from prison, I didn’t even respond to my first name because I hadn’t heard it in 10 years.”

Those words were spoken by Syrita Steib, one of the honorees of the inaugural NAACP of St. John IMAGE Award Program. The ceremony was held February 19 at River Parishes Community College in Reserve to recognize community members who have been influential in the enduring fight for equality.

Since her release from prison, Steib, a St. James Parish native, has dedicated her life to helping women reintegrate into society through her nonprofit Operation Restoration. She recently received a Presidential pardon from Donald Trump relieving her of millions in restitution fees for a crime she committed at age 19. Today, Steib continues to fight for equality and Constitutional rights in the face of oppression.

For many of the individuals honored at the IMAGE Award ceremony, the message was the same: Being a trailblazer and fighting for others is not done for recognition. It comes from a calling to help others.

The NAACP was established in 1909 in response to violence against Black people around the country. To this day, it is the largest and most pre-eminent civil rights organization in the nation.

NAACP Chapter 6077 President Shondrell Perrilloux sees the organization as a means to protect the rights of everyone in the community, regardless of skin color. The NAACP has a long history in St. John Parish, and February 15, 2021 marked the one-year anniversary of the re-activation of the local branch.

The branch has continued to grow in membership despite the gathering limitations imposed by the COVID-19 pandemic. Members advocate for equality in economic sustainability, healthcare, criminal justice, voting rights/political representation and expanding youth engagement.

“It’s a very humbling experience to say that on February 15 (2020), we reactivated with 75 members, and a year later, we are currently at 120 members. This month, we had 17 members join the NAACP,” Perrilloux said.

The 2021 IMAGE Award ceremony included a presentation in memory of Christina Maria Green Davis, the first African American to integrate a school in St. John Parish. Perrilloux felt compelled to honor the memory of Green Davis for the perseverance she showed during a time of great transition.

Green Davis’ daughter, Adrian Davis Walker, accepted the award with tears in her eyes, wishing her mother could have been there to see it.

McClanahan was happy to see many elected officials in attendance. He reflected on how important Civil Rights are, stating, “You don’t really appreciate the freedom to ride the bus or go to a school or go to Walmart. Our lives depend on us not giving up.”

He added, “We are first responders. We run to the fight instead of running away. When we fight, we win.”
Robottom didn’t start out with aspirations of working in local government, but she became the first female and the first African American elected to the parish president seat in St. John Parish. Her 10-year term ended at the end of 2019.

She hopes she has been an inspiration to the women who ran for office after her, just as she hopes the women in the new administration will inspire others to do the same.

That includes the first three African American female Parish Council members, Tammy Houston, Tyra Duhe-Griffin and Tonia Schnyder. All three were elected in November 2019, and they are humbled to be able to serve the community.

“When I stepped into this position, it was not for the recognition,” Schnyder said during the IMAGE Award program. “It was solely to help our residents, to be the voice for the voiceless, to promote unity in our community and help further our parish.”

Fiffie said he hopes to uphold the legacy Judge Jasmine built throughout her 30 years in the 40th Judicial District Court.

Awards were also accepted on behalf of Sheriff Mike Tregre, the longest serving African American sheriff after John Webre, who served 20 years in office during the late 1800s Reconstruction Era. Bridget A. Dinvaut was recognized as the first female African American in St. John Parish to be elected district attorney, and Pastor Steve O. Allen was awarded an honorary doctorate degree of Biblical studies for his outstanding community service.