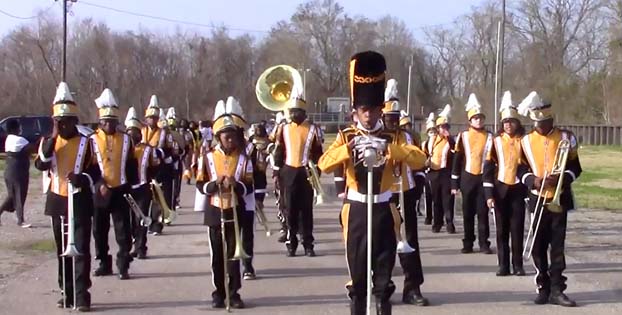 RESERVE — A typical Mardi Gras season isn’t just about indulging in king cake and catching beads. For East St. John band and auxiliary members marching in parades, Mardi Gras is a time of opportunity –  a means to secure crucial funding for their programs, as well as gain exposure to colleges offering scholarships for music and the arts.

COVID-19 has stolen so much, but throughout the pandemic, the band and auxiliary members have continued to work hard academically, perfect their talents and prepare for a brighter future.

East St. John’s marching band, dance team, flag team, majorettes and color guard came together to produce a marching video that was presented in the virtual Bacchus parade on Valentine’s Day. Sponsor Martha Ross-Cooper said the video was also a way for the hopeful students to share their talents with the community after missing so many opportunities this school year.

The Marching Wildcats, Sugarettes and Twirling Wildcats typically enjoy a full football season in addition to participating in volleyball and basketball games. This past football season, the band was limited to 50 percent participation and was only allowed to perform during home games. As winter progressed and restrictions tightened, the band was not allowed to attend playoff games, whether they were at home or away.

The band and auxiliary members have only been able to participate in one basketball game for the 2020-21 season, and only 1/3 of the group was permitted to attend. A cancelled Mardi Gras season was perhaps the biggest blow, and the team members have had to find new and creative ways to gain funding and exposure.

They have worked to stay in the public’s mind and heart by hosting a series of virtual fundraisers for the 2020-2021 school year. Some efforts have included selling masks, headbands and other merchandise. The band also held a virtual concert in December, and there are hopes of holding a public showcase before the school year ends.

“I commend them on what they were able to accomplish even in the midst of this pandemic,” Ross-Cooper said. “To have the opportunities of performing also cut down, it kind of gave them a feeling that they didn’t matter as much. It’s definitely been a struggle of a year, and I just want them to know that their efforts and the hard work they put in to perfecting their craft and skills have not gone unnoticed.”

Band director Lolowen Robinson said the perseverance his students have shown is no small feat, especially when faced with the challenge of learning to perform as a team on a virtual platform susceptible to technical difficulties.

Robinson said focusing on the silver linings has helped the students keep good attitudes despite the hand they have been dealt.

“What truly helped me through corona has been our class time and team building. Our band has had the opportunity to really get to know each other. This year has allowed us to really come together as a family,” Robinson said.

Robinson was surprised to find out that new students are still asking to join the band. He said it is vital that the school continue to provide opportunities for students to show their talents in areas beyond athletics.

“Being able to let students express themselves is therapy. It’s very vital to continue that development because education is not one-sided, and not all students learn the same,” Robinson said. “The arts enrich students’ lives. It helps develop their cognitive abilities, and it also gives them an outlet. Sports is not for everybody, and we often forget that the arts present a way to get students scholarships for higher education.”

Robinson said the community can support the East St. John band and auxiliary groups by donating any old instruments. The band is especially in need of pianos, which sponsors are unable to purchase with the current state of funding.

Ross-Coooper said support can be as simple as words of encouragement.

“Even just an acknowledgement or social media post can remind them that they are not forgotten,” she said.