RESERVE — One year has passed since the re-activation of the NAACP of St. John the Baptist Parish, and the organization has grown to 120 members despite the challenges of the COVID-19 pandemic.

The community is invited to celebrate the first anniversary by attending the 2021 St. John IMAGE Award Program. The program, which honors the outstanding contributions of community trailblazers, will begin at 6 p.m. February 15 at River Parishes Community College, located at 181 REGALA Park Road in Reserve.

The IMAGE Awards will include several acknowledgments, beginning with a presentation in memory of Christina Marie Green-Davis, the first student to integrate Leon Godchaux High School in St. John the Baptist Parish.

Green-Davis passed away in October 2020. Her grandmother was a former secretary for the St. John Parish NAACP, according to current NAACP President Shondrell Perrilloux.

“We felt compelled to honor Christina Marie Green-Davis in light of the fact that she is our local Ruby Bridges,” Perrilloux said. 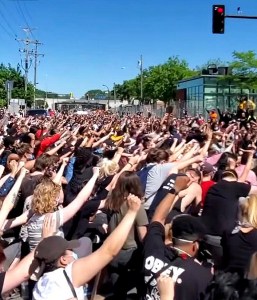 Sheriff Mike Tregre will be honored as the longest serving African American sheriff of St. John Parish in modern times. The only other African American sheriff was John Webre, who served as sheriff for approximately 20 years during the Reconstruction Era after the Civil War.
A presentation will be made to Syrita Steib in recognition of her recent presidential pardon from Donald Trump. After serving a decade in federal prison for a crime she committed at age 19, Steib established nonprofit Operation Restoration to help formerly incarcerated women reintegrate into society.

Pastor Steve O. Allen will be awarded an Honorary Doctorate Degree of Biblical Studies. According to Perrilloux, Allen has been an ardent supporter of the NAACP and has sponsored at least 10 members. Perrilloux noted that Pastor Julius Ellis has also played an important role in the reactivation of the chapter.

Those who are not able to attend the 2021 NAACP Image Awards in person can attend virtually through a link on the NAACP Chapter 6077 Facebook page. Community members will also have an opportunity to join the local NAACP for $30 a year. For more information, contact Perrilloux at 504-232-0966 or send an email request to shondrellnaacp6077@gmail.com.

The local NAACP chapter has historic roots tracing back to the 1940s. Reah Bernard, daughter of first local NAACP President Edward Hall, shared that her father worked closely with Thurgood Marshall to file a suit that paved the way for African American voting rights in St. John Parish.

Bernard said her father was a “very meek man” who fought hard for the betterment of his people, not for recognition. Subsequent St. John NAACP presidents were George Clark, Dale Wolfe, Michael Carter, Leonard Triplett and Robert Taylor II. The chapter was defunct for several years before it was reactivated in 2020.

Perrilloux is the first female president of the local chapter.

“I am passionate about the advancement of the disadvantaged and underprivileged persons,” Perrilloux said. “My unique skills and abilities qualify me to lead and duly preside over the NAACP of St. John the Baptist Parish, and my gifts and my pledge to the people was to be the Voice for the Voiceless.”

Perrilloux intends to create a legal defense fund to offer competent legal representation and ensure Civil Rights are being upheld. Since February 2020, Chapter 6077 has assisted in 10 cases, including the high profile cases of Errol Victor, Cardell Hayes and others convicted under non-unanimous juries. Perrilloux is awaiting the Supreme Court’s ruling on retroactivity in these matters.

“It’s our intention to fight for individuals who have served time and who have accepted responsibility for their actions. It’s our concern that they be vindicated and given a chance to rehabilitate themselves and become productive citizens of society,” she said.

This year, Perrilloux said the NAACP will hold local government accountable and protect the integrity of contractual services within the parish. The local chapter is fighting for an ordinance that would allow the public to monitor whether any corporations vying for contracts have contributed to the campaigns of Parish officials within the last three years.

Perrilloux said the NAACP watches for injustice with eagle eyes.

“It is the NAACP’s agenda to serve as the mediator to promote unity within our local government so we can serve the people that we have taken an oath to serve,” she said.