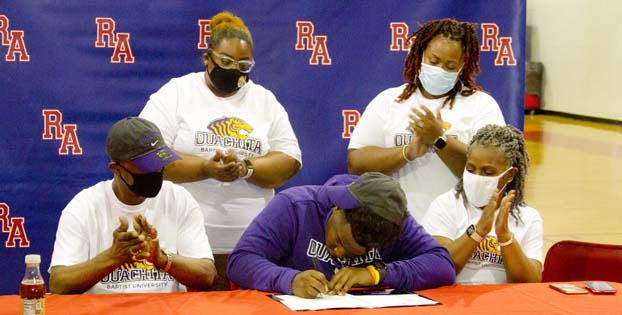 RESERVE — Nick Washington joined the Riverside Academy football team as a 160-pound underclassman playing safety. He is graduating in 2021 as a 250-pound defensive lineman with a scholarship to Ouachita Baptist University in Arkansas.

Washington was joined by his parents, Frank and Marchelle Washington, as well as his sisters Katelyn Washington and Breia Dixon on National Letter of Intent Signing Day. The signing day ceremony took place February 3 in the Riverside Academy gym.

Ouachita Baptist was solidified as Washington’s college choice after the coaches stayed by his side when he suffered a torn ACL and meniscus at the end of his junior year.

“When I got hurt, they were the only school that stuck with me and was willing to keep the scholarship on the table. They believed in me from the start, so that’s what made it an easy decision for me,” Washington said.
Riverside Academy Coach Kevin Dizer said it is no easy feat to secure a college scholarship, especially since the start of the COVID-19 pandemic.

Undeniable athletic ability was another component of the scholarship. During his time at Riverside, Washington was named a two-time all district player and a two-time co-defensive MVP. He has also received all-metro and all-state accolades.

Washington has played football since he was 4 years old, and he has gained experience in a number of positions simply by trusting his coaches and having faith in the process. As a defensive lineman, he feels he has finally found his niche.

“Defensive end feels like it’s my natural position. Coming off the ball and getting after the quarterback is what I most enjoy,” Washington said, adding that his experience at Riverside has prepared him for Ouachita Baptist.

“Playing here, we dealt with a lot of adversity and a lot of people who didn’t believe in us,” he said. “Setting that new standard my senior year really brought more confidence that I could take on the next level.”

Washington’s most memorable moments on the team came in the playoffs. During his eighth grade year, he was caught up in the excitement of Riverside Academy’s victory over St. Charles Catholic in the Dome.

His favorite senior year memory was making it to the state quarterfinals.

“No one else believed we would win over six games. That was really important to me,” he said.

Once he gets to Ouachita University, Washington plans to study kinesiology and strive each day to become a better athlete.