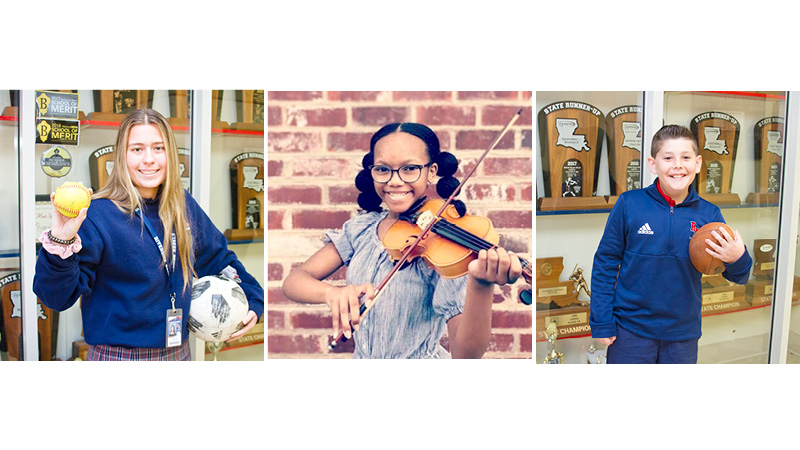 RESERVE — Kindness, intelligence and commitment to excellence have designated Cara Campbell, Riley Ellis and Liam Naquin as Riverside Academy’s 2020-2021 Students of the Year.

Cara Campbell loves a challenge, and good-natured competition inspires her to always shoot for the stars. She’s maintained a 4.0 GPA amid a rigorous curriculum. With the end of senior year quickly approaching, she is looking forward to new challenges in the future.

Cara plans to attend Louisiana State University and major in biological engineering on a pre-med track.

“I definitely like helping people. When people ask me for help, I will always be there for them,” Cara said. “I also like thinking critically and figuring things out. I know it will take hard work to get into medical school, so it will present me with another challenge.”

Cara took on a challenge senior year when she made a pact with two close friends to try swimming and soccer — two sports she had never participated before. Joining the teams of more experienced athletes was not an easy adjustment, but it has proved to be rewarding.

“It was definitely something I had to work hard at to get to the place where I wanted to be. It let me experience a different sport, and it’s definitely offered me a lot of friendships and a bond with the team,” she said.

Cara is also a talented third baseman on the Riverside Academy softball team. Earlier in her high school career, she participated in basketball and marching band.

Cara was excited to be named the 12th grade Student of the Year.

“It’s a very honorable award, and it means a lot to me that out of all our amazing students here, I received the award,” she said.

Eighth grader Riley Ellis was proud to be named the middle school Student of the Year because it represents all of the hard work she has put in while navigating the challenges of virtual classes.

Riley has achieved the highest GPA and overall scores in her class every year consecutively since the first grade. Her mother, Michelle Cole, and her 16-year-old brother, Nicholas Ellis, have motivated her to be successful in and outside of the classroom.

“My brother and my mother inspire me. They’ve been here working with me and making sure I’m doing okay my entire life,” she said.

Riley’s bubbly personality makes her a joy to be around. She’s social, faithful and active in her church. The congregation at First Community Antioch Baptist Church in Lutcher knows Riley as a talented speaker and singer. Her speaking abilities allowed her to operate a booth at a Lutcher Community Health Fair alongside adult healthcare representatives.

Prior to the COVID-19 pandemic, Riley loved to sing in the church choir. She’s also a skilled violin player with the Louisiana Academy of Performing Arts in Harahan.

“I’ve been playing the violin for about three years,” Riley said. “I would hear it in the background of songs, and I thought it was beautiful music.”

Dancing is another one of Riley’s talents. At Riverside Academy, she is the president and former secretary of Jr. Beta Club. She looks forward to once again participating in District Day competitions once life returns to normal.

Riley’s mother is proud of the fact that she follows her own path. She’s a proven leader at school, a well-rounded student and a kind human being who shows compassion for others.

When Riley learned of the homeless population in New Orleans, she took it upon herself to create approximately 50 care packages to make a positive difference in their lives.

Fifth grader Liam Naquin understands that the Student of the Year title is not just about academics, but also about having good character. Each day, he strives to help his peers and be a leader in the classroom.

Though he is only in elementary school, Liam has already demonstrated a commitment to excellence. A desire to make his family proud inspires him to perform well academically. He is proud of his achievements in the accelerated reader program, which measures literacy skills.

Liam has also won spelling bees, but his favorite subject is math. As secretary of the Jr. Beta Club, he ensures the club activities stay organized and run smoothly. He and other Beta members participated in a blanket drive last school year, just before COVID-19 shut down schools statewide.

When he grows up, Liam would like to pursue a career related to sports. He has previously played football and travel baseball, and he could see himself becoming a sports agent in the future.

“They love the school, and teachers love all of them. They just give everything, 200 percent, to sporting events, academics. They are really good, exceptional, outstanding young people,” Coburn said.