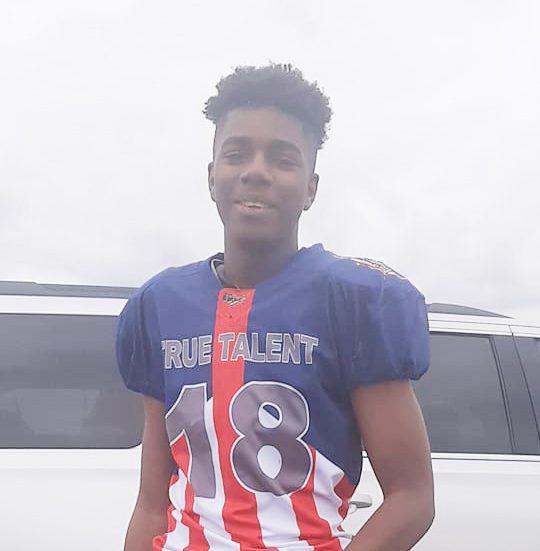 Coaches have seen Jermaine’s talent displayed on the football field since he competed with the St. John Junior Wildcats rec football team from ages 6 to 12. After six years with the Junior Wildcats, now known as the St. John Gold Warriors, Jermaine played one year with the St. John Red Team. The COVID-19 pandemic has limited playtime this past year, but it did not stop coaches from reaching out to Jermaine’s family by phone and encouraging him to try out for the South Louisiana All-Star team out of Lafayette.

After try-outs in January, Jermaine joined the All-Star team as an outside linebacker. The South Louisiana team competed in a Gulfport, Mississippi tournament this past weekend and advanced to the championship game. South Louisiana ultimately became the runner-up after taking a 12-6 loss in the championship, but the tournament provided great experience and a preview of the level of talent that awaits them in Texas later this month.

Jermaine’s stepfather, Ken Adams, said, “He loved the team and the camaraderie they had together, how hard they worked together, and he said it was a good experience to meet different kids from different states. He wished they could have won the championship, but it was fun, and they had a good time.”

Adams added the South Louisiana All-Star team is giving Jermaine the opportunity to train under different coaches and learn different systems, which will contribute to his versatility on the football field.

Jermaine, son of Ebonee Craighead-Adams, is an honor roll student with a 3.2 GPA at East St. John Preparatory Academy. He looks forward to becoming an East St. John Wildcat and later attending LSU or Tulane to study sports medicine.

LAPLACE — As the end of high school draws near, National Signing Day becomes an occasion for student athletes to... read more