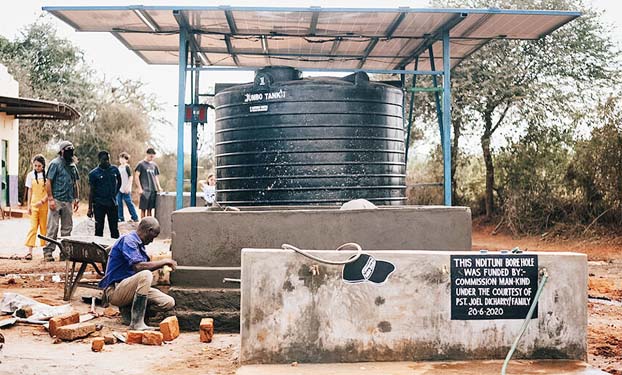 LAPLACE — Within a matter of weeks, approximately 225 families at New Wine Christian Fellowship in LaPlace raised $35,000 to fund the development of a well that will bring clean water to Machakos County, Kenya.

The donation was given to Commission Man•Kind, a nonprofit based in Hammond and operated by Joel and Joye Dicharry.

The Dicharry family desired to make a difference when they learned that children in the village of Ndituni had to walk nearly two hours to reach the polluted Athi River. Families had to live in fear of waterborne diseases including Typhoid, cholera, dysentery, giardia, hepatitis A, and E. coli.

Joel and Joye Dicharry moved to Kenya with their seven children and began working with local ministries throughout East Africa, as well as Angels Center of Hope, to bring clean water to the village of Ndituni. In spite of a pandemic and all the chaos of 2020, Commission Man•Kind brought a clean water well to nearly 1,000 families.

The Dicharry family plans to move back to Kenya by the end of March 2021, and they have a New Year goal to raise money for five wells in five months. As of Jan. 25, four of the five had been sponsored.

According to the Dicharry family, the wells are costly because of the climate. In order to reach clean water, crews must drill 600 feet deep through volcanic rock.

Joel added that he is excited about the work New Wine is doing in local communities, the state of Louisiana and now throughout the world.

Bernard has known Joel Dicharry since he was a young boy, and he was inspired by his commitment to make a difference in the lives of others.

“It’s been so exciting to see someone who had a desire to bring water to people who had no water and bring hope to people who had no hope,” Bernard said. “He shared it with us before Christmas. I told him I felt from the Lord that God wanted us to adopt one of those projects and pay for one of those wells. We were able to raise funds and give $35,000 to Joel to drill the well in a village in Kenya.”

The donation to Commission Man•Kind was part of New Wine’s annual Christmas charity. According to Bernard, the Christmas 2020 service opportunities were inspired by Matthew 25:35-36, 40: “For I was hungry and you gave me something to eat, I was thirsty and you gave me something to drink, I was a stranger and you invited me in. I needed clothes and you clothed me, I was sick and you looked after me, I was in prison and you came to visit me.

“The King will reply, ‘Truly I tell you, whatever you did for one of the least of these brothers and sisters of mine, you did for me.’”

In addition to supporting the well project in Kenya, the families of New Wine Christian Fellowship gave back to approximately 20 pastors in Honduras who had lost everything from hurricanes Iota and Eta. The church brought blankets and gifts to the elderly at Twin Oaks Nursing Home in LaPlace and the Southeast Louisiana Veterans Home in Reserve, in addition to delivering socks and toiletries to St. John the Baptist Parish inmates.

New Wine also partnered with CRC Global Solutions and the local credit union to bring fresh groceries and gift card donations to 100 St. John Parish residents who were out of work for the holidays.

“We want to be a church that is committed to serving the least of these,” Bernard said. “I’m grateful God has blessed us with a generous congregation who are committed to loving people like Jesus.”

More information about the well project is available at www.commissionmankind.com and on the Commission Man•Kind Facebook page.

Donations can be directed to https://www.commissionmankind.com/donate-1.