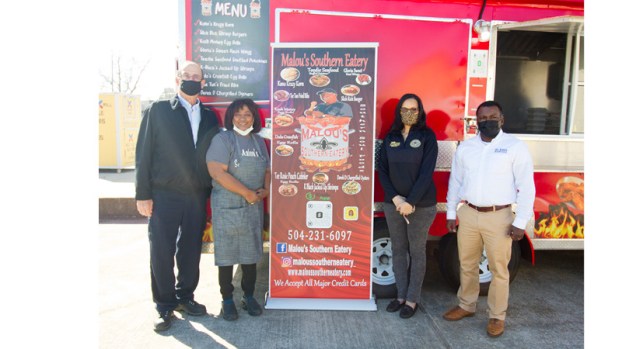 LAPLACE — Martin “Malou” Lee Sr. was known from Baton Rouge to New Orleans and beyond for his delicious boiled seafood. Malou passed away in 2011, but he left a legacy through 12 children who are each chefs in their own right.

In June 2020, his daughter Tanza Robertson introduced the Malou’s Southern Eatery food truck to the St. John the Baptist Parish community. The food truck can be found parked at the Choice International Business Development Center at 1005 Cambridge Drive from 11 a.m. to 8 p.m. just about every day of the week. Last week, the River Region Chamber of Commerce held a ribbon cutting to formally introduce Malou’s Southern Eatery to the community. 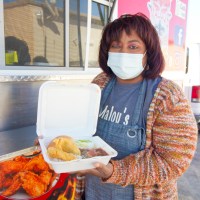 Many who are familiar with the food truck have fallen in love with its seafood and soul food meals, including but not limited to fried ribs, fried fish, Kano’s Krazy corn (Parish President Jaclyn Hotard’s favorite, according to Robertson), seafood pies, shrimp burgers and Gloria’s Sweet Heat Wings. The sweet heat wings are named after Robertson’s mother since they are based on one of her time-tested recipes.

The food truck’s success is built upon the strong bonds of family. At last week’s ribbon cutting, Robertson said her mother, children and siblings lend a helping hand to bring delicious food to the community.

Other favorites are the specialty egg rolls. Malou’s egg rolls can be stuffed to the brim with crawfish, crab cake, philly cheesesteak or even peach cobbler. The popular “Kashmoney” egg roll features a blend of meat with a special seasoning. The menu is continuing to expand, with recent additions including Taco Tuesdays and refreshing peach tea.

“We don’t buy anything premade. Everything is fresh and everything is homemade, even the sauces,” Robertson said. “This truck is really a blessing. Everything that comes out of the truck is a hit. I haven’t seen anything fail.”

The roots of Malou’s Southern Eatery also trace back to a local restaurant Robertson operated 20 years ago. ShonTanz’s, known as a place to “soul-cha-lize,” was the first Black-owned restaurant to open on Airline Highway in St. John the Baptist Parish.

“Twenty years later, we have the extension of that, Malou’s Southern Eatery,” Robertson said. “That was in 1999-2000. After my dad passed in 2011, I wanted to keep his legacy alive. I started doing festivals under the name. It went from festivals under a tent with a barbecue grill and a fryer to the food truck.”

Since making its debut in June 2020, the Malou’s Southern Eatery food truck has become a fixture in the community. Robertson and her family were quick to park outside of LaPlace hotels and serve free meals to stranded evacuees after Hurricane Laura devastated Southwest Louisiana.

River Region Chamber of Commerce representative Dayna James has worked closely with Robertson and considers her to be one of the hardest workers she knows. According to James, Robertson has had to overcome a lot of challenges to get where she is today.

District Six Councilwoman Tonia Schnyder welcomed the food truck into the community and encouraged residents to come out and support local business.

NORCO — Located conveniently off of Airline Highway at the site of the old Spillway Bar, Coffee & Norco is... read more