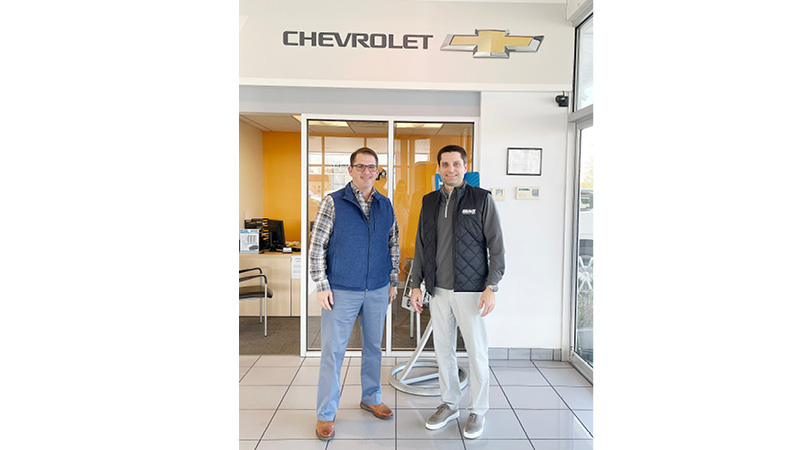 LAPLACE — Under new ownership and management at 2020 W. Airline Highway in LaPlace, Geaux Chevrolet (formerly Rainbow) is dedicated to taking care of employees, customers and the River Parishes community.

New owners Lee Carney and Nick Richard came into the industry under similar circumstances during times of economic recession. Along the way, they built a friendship and found a passion for helping customers purchase and service the vehicles of their dreams.

Richard grew up in LaPlace after his parents moved to the area in the 1970s. He attended Ascension of Our Lord and St. Charles Catholic High School, graduated in 1993, and went on to study at the University of Southern Mississippi until 1998.

Richard believes growing up in St. John Parish influenced his path to an auto career.

“Growing up in LaPlace, cars were always a big deal to the people here,” Richard said. “They used to drag race out on Old 51, on the old Ruddock Road every Friday night.”

After college, he returned home and met his wife. They began raising their family in Madisonville as Richard went to work for Well’s Fargo Auto Finance. That’s where he first met Carney, who was starting his auto career with All-Star Automotive in Baton Rouge.

Prior to joining the car industry, Carney played basketball on a college scholarship and coached basketball for four years after that. The Baton Rouge native spent some time in Texas to figure out his path in life, got into the mortgage industry, and later shifted to the automotive industry around the time of the mortgage bust.
Richard, after starting out as a bank rep for All-star Automotive, also transitioned his career goals as the economy took a downward spiral.

“With the mortgage bust, I lost my job, and that’s how I got into retail,” Richard said.

Lloyd Guillot, owner of the former Rainbow Chevrolet dealership in LaPlace, gave Richard his first opportunity in the car business at one of his stores in Covington.

In 2016, Carney and Richard’s paths converged again. Carney convinced Richard to work with him in Baton Rouge. Last year, an opportunity arose to purchase the Rainbow dealership in LaPlace, and a new business partnership was born when the sale became final on November 30, 2020.

“First is our people – our employees and families. Second is our customers and their families, and third is making sure we are taking care of our community,” Carney said. “We want people to know we care about them before, during and after the sale. If you are broken down on the side of the road, call us and we’ll try to get somebody out there to get you. We want to be there for people and there for customers.”

Carney added that it’s not often someone can go to a place of business and ask to speak with the owner directly.

Both Carney and Richard have children, and they understand the value a close-knit community has to local families. As Geaux Chevrolet becomes established in the community, the owners plan to sponsor local high schools.

“We’ve invested in the store, and we want to invest in the community and bring it back,” Richard said. “We’ve hired people originally from this community. Our general sales manager grew up two houses down the street. Our salesperson is originally from LaPlace. We are two guys who have paved our way, and the people of the River Parishes have a new place to come with some new energy. We’ll be happy to sit down with anybody who comes in here personally and talk to them about their experience with service, sales and the body shop.”

“Even if they bought it from a place in New Orleans or Baton Rouge, they can come try us out. We want to service everybody,” Carney said.