RPCT raises the roof with $10K donation from Entergy 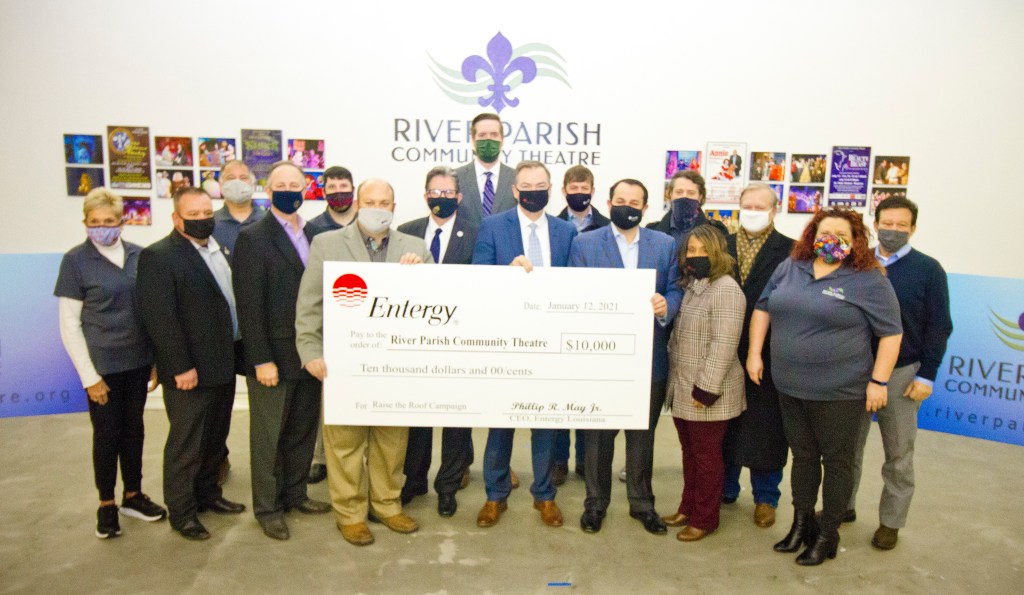 RESERVE — River Parish Community Theatre is officially raising the roof with help from a $10,000 donation from Entergy Louisiana.

Year after year, RPCT would have to dispose of thousands of dollars worth of props because there was nowhere to store them between productions. In 2019, RTC allowed River Parish Community Theatre to begin using the company’s former headquarters building on West Fourth Street in Reserve, which had been unoccupied for more than a decade.

Volunteers from the theater organization dedicated countless hours to replacing old flooring, painting and cleaning. Upon becoming aware that the building could not be insured until the roof was replaced, RPCT launched a community-driven “Raise the Roof” campaign to raise more than $70,000 for a new roof.

RPCT president Sean Roussel said the replacement of the roof is now underway thanks in part to recent donations from EcoLab and Entergy. Elected officials and RPCT supporters gathered at the building earlier this week as Entergy presented a $10,000 check.

Roussel was happy to be standing in a room filled with props this week as he reflected on the entire experience.

“Recently, RTC contacted us with the intention of donating the building. We gladly accepted. The only issue we faced is that, when contacting our insurance company, the building was deemed uninsurable due to leaks. We embarked on a journey. We decided this was something we thought we could tackle, and we started having our Raise the Roof fundraiser,” Roussel said. “We started with a tele-phon in August. Incredibly, and very humbly, we raised more than $20,000 from community donations and some small business donations as well. We also applied for grants. Some other businesses stepped up, and Entergy very kindly took a look at it and decided to make this very generous donation, which put us right at the goal. We just received a $5,000 grand from EcoLab that got us right where we need to be. We were very, very happy to be able to get started on this work.”

“With the economy and challenges we had from COVID and so forth, there really is an opportunity to have high-paying jobs and great economic outcomes in the River Parishes. Part of that is quality of life,” May said. “I think the things you do here to improve quality of life in this community is part of economic development, part of bringing up our communities and making them better.”
St. James Parish President Pete Dufresne and St. Charles Parish President Matt Jewell were also present during Tuesday’s check presentation.

Dufresne said he welcomes RPCT’s endeavors, as innovative forms of recreation are much needed in the River Region.

“On a parish level, we spend tons of money on recreation, soccer, basketball and baseball. For some children, this is what they love. This is their sport. It gives us another opportunity, another avenue to reach our children,” he said.

Jewell said the building donation and the Raise the Roof campaign highlighted great examples of community partnerships. As a former talented theater student, he understands how important it is to work together to preserve the arts.

“It’s always great to have community partners step in and help out in times of need. Entergy, RTC, all those folks have always done that,” Jewell said. “We’re very grateful in the River Parishes to have you guys here.”

Daniel Allynn Madere, son of Reserve Telephone Company founders Daniel Adam Madere and Inez Madere, vividly remembers the history of the building on West Fourth Street. Equipment was moved out of the Madere household and into the headquarters building in 1954. At the time, only the first part of the building had been constructed. In 1966, a taller addition was added to the building to accommodate new, larger equipment.

Madere will never forget that the second part of the building was completed on Oct. 16, 1966. There was a lot of work that went into it, especially since the switch to newer equipment had to be completed precisely at midnight on a Friday night. Madere also recalled that the building was designed to withstand hurricane force winds since Hurricane Betsy had ravaged the area only one year prior.

The headquarters building included a sitting room, a shower and a kitchen that wasn’t completed. When Madere did a kitchen remodel on his own house some time later, he brought over materials to complete the kitchen area.

RTC recently finalized its donation of the building after seeing the dedication and care that RPCT volunteers put into maintaining the structure.

“Once we witnessed the care and depth of appreciation RPCT had for the property’s historical value, the decision to repurpose this community investment and permanently donate this building to them was an easy one,” said Josh Descant, CEO of REV Broadband – the parent company of RTC, EATEL, Vision Communications and VENYU.

River Parish Community Theatre is known in the community for putting on summer shows, winter productions, workshops and other events throughout the year. For more information, visit www.riverparishtheatre.org/.