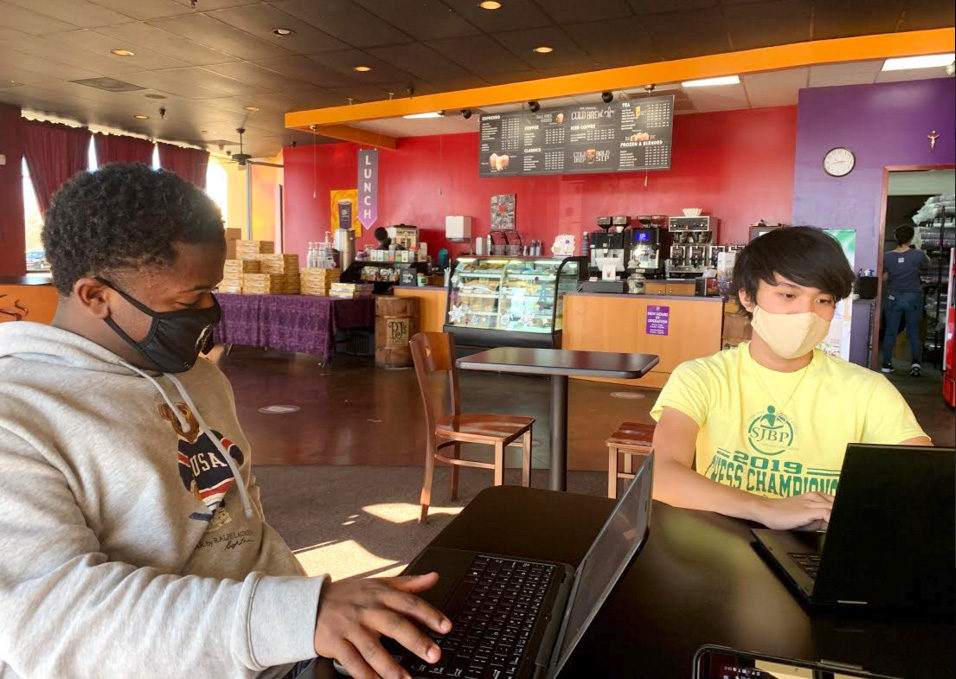 LAPLACE — Chess is a sport that isn’t confined to a certain space or venue. Virtual tournaments organized during the COVID-19 pandemic have allowed students in the St. John the Baptist Parish STEM Magnet program to battle opponents from all corners of the globe.

STEM students Charles Harris and Cyrel Rodrigazo recently competed in a virtual tournament with more than 2,200 competitors of all ages and skill levels. Sitting with their laptops in PJ’s Coffee of LaPlace, the scholastic players put their game faces on and pulled out upset wins against professional players from around the world.

National chess master Rene Phillips was with the boys as they competed in the tournament. Phillips, who coaches private students and also serves as the chess team coach at the STEM school, said chess engages the parts of the brain used for problem solving, critical thinking and strategizing.

“The two students who participated had an opportunity to pit their minds against some of the best players around the world,” Phillips said. “It was specifically designed to allow players from around the world to engage in competitive play while still maintaining social distancing and all of the CDC precautions here in the United States and from other nations around the world. It was a great platform for students and players of all ages to meet each other and to compete and exemplify good sportsmanship while playing a great game.”

Charles is the newest addition to the chess team, and last week’s tournament is only the second one he has competed in. Despite playing many tough games against much higher rated players, Harris managed to pull off the best win of his short career when he overtook a much older gentleman from Norway.
“Typically it’s very seldom that a novice player like Charles gets a chance to play someone who has been playing a lot longer and is a lot older,” Phillips said. “It was one of the highlights of the tournament.”

Rodrigazo was a member of the STEM school’s national championship chess team a year and a half ago. However, he still had a novice rating compared to the professional players competing in the virtual tournament. Three of the four games he won in the tournament were against professional players in an accelerated 10-minute time limit.

“Despite those players having advantageous positions, Cyrel is such a quick thinker and a quick mover that he was able to win those games on time,” Phillips said. “It was a tremendous feat, and he did exceptionally well.”

Even Phillips was able to jump in the tournament and compete.

“It was surreal,” he said. “Not often do you get a chance to play in a tournament with your coach. It was a great opportunity, a great format, and we all had a great time.”

While COVID-19 has impacted every facet of life and every component of the school system, the 2021 Super National Championship for scholastic players is still scheduled to take place in Tennessee in May 2021. Even if the in-person event is cancelled, it is possible the event will move forward virtually.

The Super National Championship takes place only once every four years. With 10,000 chess players from first through 12th grade competing, Phillips joked that there is enough focus and brainpower in the room to split an atom.

“We’re looking forward not only to qualifying, but going represent Louisiana and hopefully coming back with another trophy,” Phillips said.

A good performance can pay off big time, as Phillips said there are many academic scholarships offered around the country for students who excel playing chess.

“Colleges have recognized the merits of chess and how it improves standardized test scores,” Phillips said.