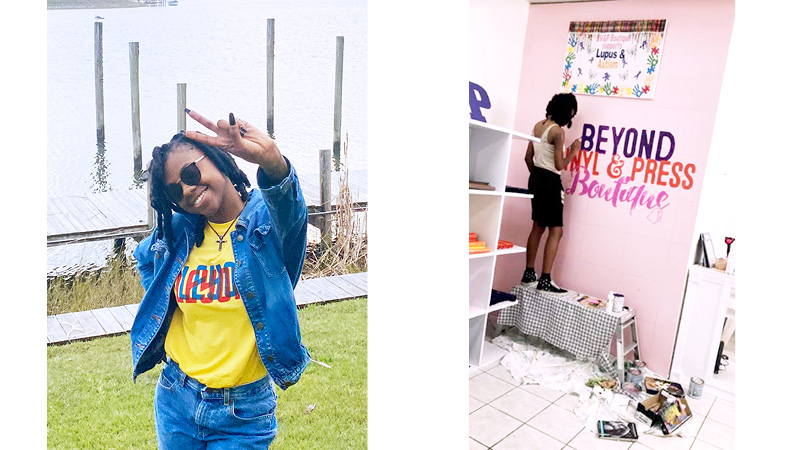 RESERVE — 2019 East St. John graduate Coraniquejuanae Calexusleyoi Jackson is quite certain there is no one else in the world with the same name. It completely encapsulates her uniqueness and spontaneity, much like her growing fashion brand, LEYOI.

Jackson first gained an interest in fashion design in 2016, when she was constantly looking for new clothes to wear out with friends. One day, after rummaging through her clothes in search of the perfect outfit, Jackson pulled out a pair of old jeans, cut them up and added custom patches to them. The compliments she received from inspired her to start making clothes for family and friends.

“Once I saw that people enjoyed it, it kind of gave me a boost,” Jackson said. “Even though my parents were always supportive, sometimes you need a little push from other people.”

Upon starting the LEYOI brand, Jackson realized it takes time to become successful. Something in her heart told her to keep pushing forward, and that dedication is paying off. This year, Jackson surpassed her goal of earning $6,000 to $7,000 from her fashion business in the midst of working, attending college at Dillard University and pursuing her love of painting.

Jackson promptly invested her earnings back into her business, recently acquiring a screen-printing machine, a flash dryer and UV exposing units to complement her Cricut machine and heat press. She recently converted an empty room in her house to an office where her brand can grow to new heights.

Jackson described the LEYOI brand as chic street wear. All of her clothing is exclusive to the LEYOI brand and released in limited quantities to ensure customers get a diverse set of unique products. Ideas for the designs often come to her spontaneously, and she looks forward to adding more products to her online catalog this year.

“The brand is for men and women. A lot of my audience ranges from about age 11 to adults. This year, I have some big things coming up as far as kids and toddlers,” Jackson said. “It’s street style, and I also do hand-sewn garments from scratch using patterns.”

Jackson’s friend Rashawn Frank was quickly drawn to the style of the LEYOI brand.

“Nique is such a talented artist. Her clothes are very comfortable and aesthetically pleasing to the eyes. Every piece of clothing she makes is exclusive and exquisite,” Frank said. “At first glance, I knew for a fact I would be a daily customer simply because Nique applies her beautiful artwork to her clothing. Doing this makes her clothing authentic and different from what we see today.”

One of Jackson’s fashion inspirations is Nicole McLaughlin, a designer who has reinvented street wear by up cycling scraps of fabric, objects and older clothes. Jackson also considers the late Jean-Michel Basquiat to be one of her idols. Basquiat was known for street art that became part of hip hop culture and later inspired a line of handbags by Coach.
Jackson also has a love of painting, whether she is working with acrylics, watercolors or painting directly onto shoes and clothing. The unique style of her clothing brand is reflected in her paintings.

“That’s another way I mix fashion and art,” Jackson said. “When I paint on canvas, everything is abstract. It’s all about the viewer and how they look at it.”

Jackson has painted several wall murals, including the mural inside the new Beyond Vinyl Press & Boutique craft supply store in LaPlace.

Jackson said she would not be where she is today without the support of Dillard professor Muffin Bernstein.

“I helped her do a 96-foot ground mural in the French Market three or four months ago,” Jackson said. “Even before that, she’s always given me supplies and has been there for me.”

Jackson has always been driven to accomplish her goals. That determination was seen even in high school, when she gathered enough credits through online classes to graduate a full year early.