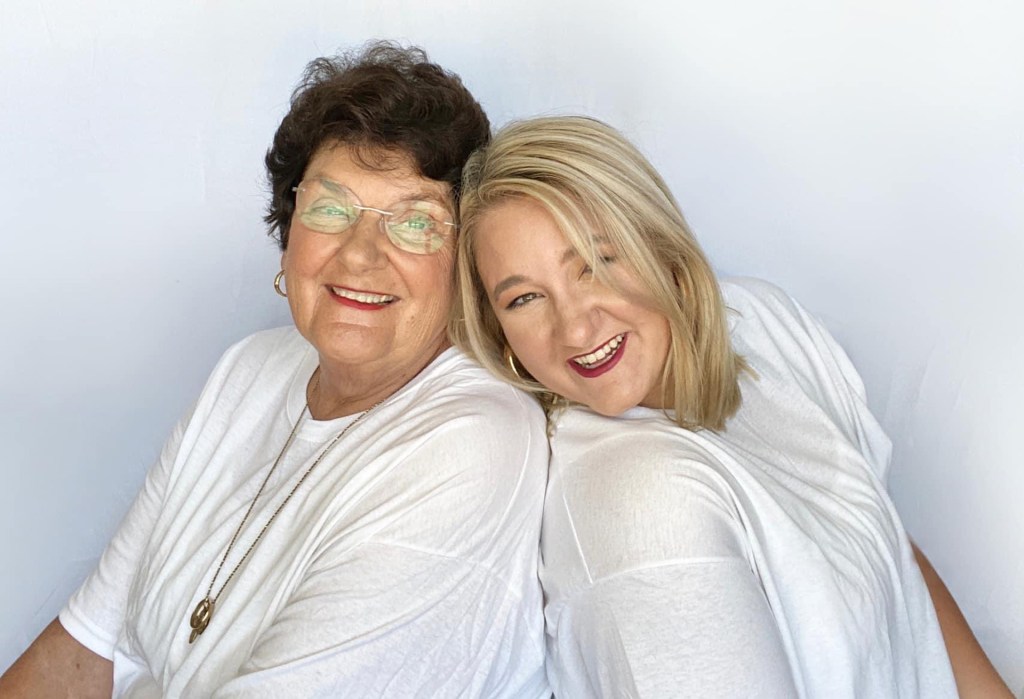 Katherine Scorsone and her grandmother Judy Folse aren’t afraid to throw on a wig in a public space and dance like nobody’s watching – it’s always rewarding to see the smiles that spread across the faces of onlookers.

The Vacherie family is sharing their silly, carefree dances with the world and raising spirits in the process. Sisters Katherine, Caroline, Elizabeth and Amelia are part of the production team, along with parents Michel and Mary Beth Scorsone and grandmother Judy. 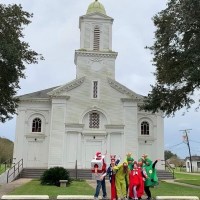 A “Christmas caroling” excursion through Vacherie included a stop in front of St. Phillip Church in Vacherie.

Their collection of videos is shared online through the Scorsone Productions Facebook page, which was started this year to bring some light into the world amid the COVID-19 pandemic.

However, nursing student Katherine Scorsone’s love for making videos goes back to her childhood.

“Ever since we were little, we just made funny videos together as a family and shared them on social media to brighten people’s day. As we got older, we got better at videoing, editing and learning what grabs people’s attention and how to make someone who might not be having a great day laugh,” Katherine said.

Katherine picked up her video editing skills by taking an interactive media class in her senior year of high school. Now 23 years old, she still enjoys making lighthearted videos with family. The entire Scorsone family appears in the videos, but Katherine and her grandmother are usually the stars of the show.

Judy, affectionately known as “Nani” by her grandchildren, saw the video platform as channel to give back during the 2020 holiday season, building upon a tradition that was started by her late husband.

Stanley “Dip” Folse was sometimes called the Santa Claus of Vacherie because he could often be found delivering soup to the elderly members of the neighborhood at Christmastime. Dip passed away on Oct. 29, 2019, but his legacy is far from forgotten. 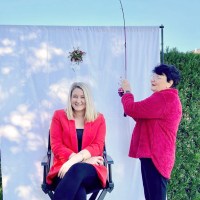 Judy Folse tries to be the ultimate wingwoman for her granddaughter Katherine Scorscone by holding mistletoe over her head.

Instead of soup, some Vacherie neighbors were surprised this year with beautiful poinsettias delivered to their door. The delivery also came with a show a little different from your average Christmas carol. As the elderly residents came to the door, they saw the Scorsone family in the front yard, dressed in festive Christmas costumes and waving their arms merrily to classic holiday songs.

The family stopped at about 15 houses and recorded the experience in a short video posted to the Scorsone Productions Facebook page.

“We actually made a list of a bunch of people that my Nani knew who she thought would be really excited to get a poinsettia,” Katherine said. “She knew a lot of them had lost their husband this year. My Nani lost her husband last year, so she knows what it feels like to be lonesome, and she wanted to be there for them.”

While many of the neighbors cautiously kept the screen door closed, Katherine could see the smiles that played across their faces as they witnessed the sweet surprise. 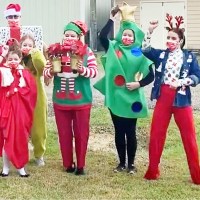 The Scorsone family dresses up in Christmas gear to surprise neighbors with poinsettias.

“A lot of them had tears in their eyes when we left,” Katherine said. “Once we brought one poinsettia, it was so contagious. We just wanted to do more and kept asking, ‘Where are we going next?’”

Katherine said it was easily the most complex video the family has produced to date. Every person had a job, whether it was playing the song on the speaker or grabbing and delivering the plants. One person was in charge of a tripod catching the neighbors’ reactions, while another person pointed a tripod to capture the front yard performance.

According to Katherine, it was almost comical how fast they had to get set up in each yard before the neighbor could come to the door and question why people dressed in Christmas tree and elf costumes were running around on their property.

“We delivered it to a lot of people that were widows, and I know how special it is to get something around this time when you’re without a husband,” Judy said. “Since my husband used to deliver soup to a lot of these people when he was alive, we thought we would do something, but none of us make soup like him. I thought maybe we would get poinsettias.”

The holiday season wasn’t the only time Scorsone Production used videos to give back.

In October 2020, Katherine’s passion for nursing and video production collided when she made a breast cancer awareness video at Lake Sherwood Village Retirement Community in Baton Rouge. Staff and residents put on pink gloves, pink masks and pink dancing shoes as they took a stand against breast cancer, one step at a time.

“It was really nice. Especially during right now with coronavirus, older people aren’t able to socialize as much as they used to be. They need that social interaction now more than ever,” Katherine said. 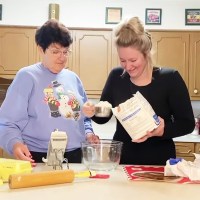 Judy Folse and Katherine Scorsone film a cooking demonstration that devolves into a flour fight.

Raising spirits during the COVID-19 crisis was also the inspiration behind a Scorsone Productions video that featured a second line dance party down the aisles of Schexnayder’s Supermarket. The video went viral and earned the family a feature on WGNO in Fall 2020.

Another video included socially distanced driveway dance parties appropriately matched up to the song “Dancing in the Streets.” Katherine and Judy post skits to the Facebook page where they have a blast together, whether it is a cooking show that devolves into a flour fight or a video poking fun at Judy’s Vacherie accent.

Katherine noted that people often call her mother and ask what video the girls are planning next. The truth is, almost everything is spontaneous. Once Katherine is out of school and has a set work schedule, she thinks the videos will flourish into a bigger production. For now, it’s a fun side gig.

Whatever the future brings, the videos will always revolve around making people happy.

“The videos always deal with something the average person is not going to be doing in public. We get costumes and wigs involved. Looking at people my age, you can’t really find someone else that’s 23 years old that is going to say, let’s go to the grocery store and put a wig on and dance around just so we can see other people laugh around us. Most people are like okay, no, because what are they going to think of me? People are going to think I’m crazy,” Katherine said. “My Nani is the perfect partner in crime because she doesn’t have anything to worry about. We almost had to get both of us a pair of Depends for the grocery store video because we were cracking up together the whole time.”

Katherine said her family appreciates all of the likes and shares, and they read every comment. With every video, Katherine always tells Judy this one is going to be “the best one yet.”