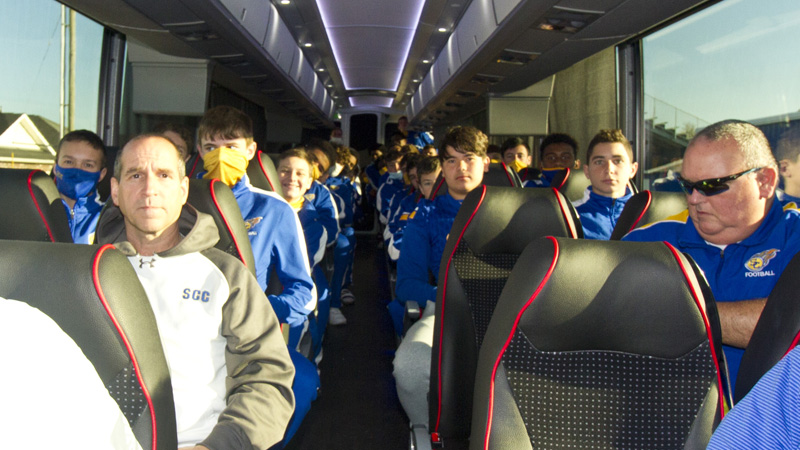 The Comets left town on a bus Monday morning to take on Lafayette Christian for the championship title.

NATCHITOCHES – This match up was a moment the St. Charles Comets hoped for, worked for, waited for.

On Monday, the Comets took the Turpin Stadium football field to encounter the Lafayette Christian Academy Knights in the Louisiana Division III State Championship, a rematch from 2019 that ended with the Comets taking a loss.

Just the sheer excitement of going to state again, back to back, made the Comets hungry. A chance to redeem themselves was on the table, but history repeated itself when the Comets ultimately lost 12-7 to a talented Knights squad.

The Knights spared no time throwing deep to Caemon Scott on the first play, who scored the first touchdown of the game at 11:48 in the first quarter. The Knights were off to a 7-0 score.

The Comets drew a flag on the return and later fumbled at 10:22 right near the Knights’ end zone, which caused a turnover on downs. The Knights capitalized on that turnover by making a field goal, which made the score 10-0 with 9:17 in the first quarter.

The second quarter began intensely, with an interception by Mandel Eugene, who ran it all the way, 82 yards, for the first and only SCC touchdown, to make the score 10-7 in favor of LCA. SCC’s Kendell Harris sparked the offensive
momentum after catching a 32-yard pass, which gave the Comets their first first down of the game. The Knights fell victim to penalties, not to mention being held down by the strong Comet defense, which left LCA scoreless in the second quarter.

Both teams played hard, as they swapped punts most of the quarter. Big sacks by Kaiden Jones in the last few seconds of the half showed the Knights that SCC would not allow a last minute score. The Comets offense
seemed to gain more confidence as they continued to run and pass the ball throughout the quarter. The second quarter ended with the Knights over the Comets 10-7.

The third opened with the Comets receiving the ball and they worked the clock for the most of the quarter as they inched towards the goal line. A deep punt gave the Knights offensive position at the 7-yard line with a little under four minutes left till the end of the quarter. A flag pushed the Knights even further back at third down, which gave the Comets an opportunity to have another set of downs.

Another flag put the Comets at the 39-yard line with 3:19 to go till the end of the third quarter. An official review on a play ran by Zack Vicknair gave SCC the first down, which turned into a series of downs. The third quarter ended 10-7 with the Knights over the Comets.

At the start of the fourth quarter, the Comets worked the clock with a series of downs as they tried to score a touchdown, hoping to take the lead. On a fourth and three down, Zach Vicknair ran the ball but got sacked, which gave the Knights position at the 31-yard line. The Knights worked on the Comets’ defensive line as they worked the clock down in an effort to keep the Comets’ offense off the field.

With a little under four minutes remaining, LCA kicked to the Comets, who gained possession at the LCA 4-yard line. The Comets needed to push the ball up the field at least 96 yards. With 3:22 left in the game, a pass to Kendell Harris went incomplete, and a flag on the Comets set the Comets back five yards to make it a fourth and six situation. LCA called a time out with 2:11 left on the clock. Another pass was incomplete by SCC, and a turnover on downs put the ball in LCA’s hands at their own 9-yard line with 2:03 left on the clock.

The Knights tried to score a touchdown but was stopped in red zone each time by the Comet defense, and LCA turned the ball over with 20 seconds left in the game. However, the Lafayette Christian Academy Knights scored a safety with two seconds left and won the game with a score of 12-7 to take the Division III State Championship title for the second year in a row.

The Comets fought extremely hard throughout the entire game and these boys have earned the respect of everyone
in the River Parishes. We commend each and every one of these players and coaches for their effort and extraordinary dedication as well as tenacity to have played such an awesome season through a pandemic.

The River Parishes are extremely proud of you, Comets!