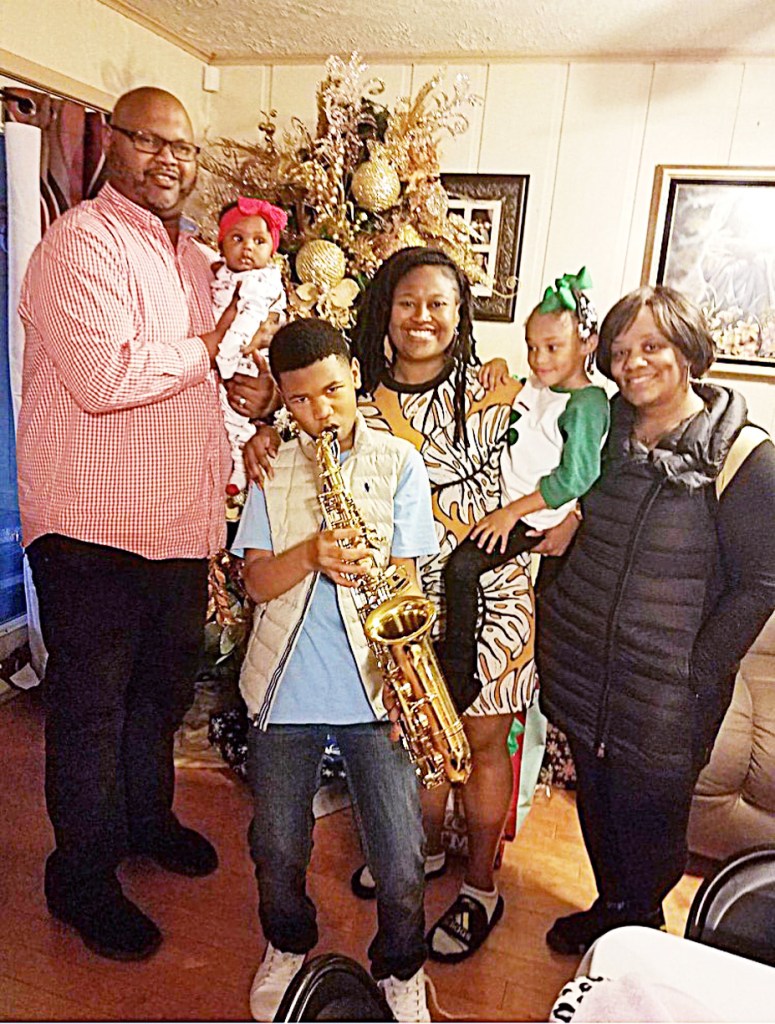 VACHERIE — When West St. John alumnus Dramar Saul started putting on weight earlier this year, he and his family joked that he was packing on some quarantine pounds. But it didn’t take long to see the problem was something else entirely when he put on 50 pounds of fluid in less than two weeks.

Over the past six months, Dramar has persevered through acute kidney rejection, blood transfusions, a bone infection caused by an open wound and six surgeries to save his foot.

The 43-year-old father of three is now recovering at home with his two youngest daughters, ages 5 and 1 ½. There is still a long journey ahead, but Dramar believes the grace of God has worked miracles in his life.

Dramar’s mother, Emelda Saul, is asking for the community’s help with a CashApp fundraiser. Proceeds will go toward Dramar’s medical expenses and also provide financial assistance for his family during this challenging time.

Dramar received his last payment from his six-month disability this week, but he is still unable to return to work. The CashApp fundraiser will help tide his family over until he is able to receive social security disability and eventually return to gainful employment.

Emelda said her son is no stranger to adversity. Through everything he has faced, he has maintained his faith and gentle heart.

“He is humble and kind and never complains. He was diagnosed with juvenile diabetes at the age of 13 and became insulin dependent, but that never stopped him. He played high school sports and went on to play college football on a scholarship,” Emelda said. “He’s a fighter and a hard worker who has overcome more in his young life than many people twice his age, but overcome he has, all by the grace of God.”

Dramar recounted the story of his hospital stay that lasted from June through September. He had received a kidney transplant six years ago but seemed to be doing fine until his health rapidly declined earlier this year.

On June 9, Dramar went to Lakeview Hospital with tired and achy legs, wondering why he had put on more than 50 pounds of fluid in less than two weeks. When the labs returned, he was transferred to Tulane Medical Center for treatment.

“During that time at Tulane, the treatments were aggressive. So aggressive, I didn’t think I was going to survive them,” Dramar said. “Four treatments of plasmaphoresis, where my blood is removed along with my antibodies. Several blood transfusions and chemotherapy. After these treatments, I was cleared of rejection and released on June 23.”

But that was only the beginning. On June 29, Dramar was admitted again for another blood transfusion to combat extreme fatigue that left him feeling delusional. During his time at the hospital, his wife discovered a blister on the bottom of his foot. Further examination led to a diagnosis of ostomalitis, which is a bone infection caused by an open wound. Even after antibiotics, Dramar had to endure six surgeries to avoid foot amputation.

“How do you handle a situation like this at 43 years old?” Dramar said. “I have the rest of my life to live with two kids to raise. So I cried out to God and confessed and surrendered my healing over to Him, but in the same moment there was a knock on the door.”

A short, elderly man walked in an introduced himself as John. He explained that he was one of the chaplains at the hospital, and that he wasn’t supposed to come in that day but God sent him. As John started to pray for protection, Dramar started to cry.

“At that moment, I felt a deeper peace come over me. I began to praise and worship God for His many blessings. I knew then I would make it,” Dramar said.

It helped that he had an entire army supporting him. His sister, Reshonn, and East St. John teacher Ryshique Williams had set up a prayer line with people from not only Louisiana, but also Texas, Mississippi, Ohio, California and other points around the country.

Emelda truly believes that was the point her son’s condition started to improve. In addition to the prayer line, the Saul family found great support from the congregation at First Community Antioch Baptist Church in Lutcher.

A few weeks after the prayers, Dramar’s journey continued with more antibiotic treatments. His weight had climbed to 407 pounds with excess fluid, which led to shortness of breath and limited movement. Dialysis helped him lose over 100 pounds of fluid weight within a month. He was able to stand up for the first time in four months and got the green light to begin physical therapy.

At the beginning, he was only able to walk 12 feet. After 14 days, that increased to 500 feet, and he used his regained mobility to finally walk out of the hospital.

Emelda said her granddaughters are thrilled to have Daddy home after six months in the hospital limited them to virtual visits.

“That is a hard thing to watch your child go through. I wished I could take his place. He said, ‘Mama, this burden wasn’t meant for you to carry. It’s mine,’” Emelda said. “God has brought him this far, and God is going to continue to bring him further. I want to thank people for all of their support and prayers and ask that you continue to pray for him. I’m just so grateful. My heart overflows with joy and with love from the community.”