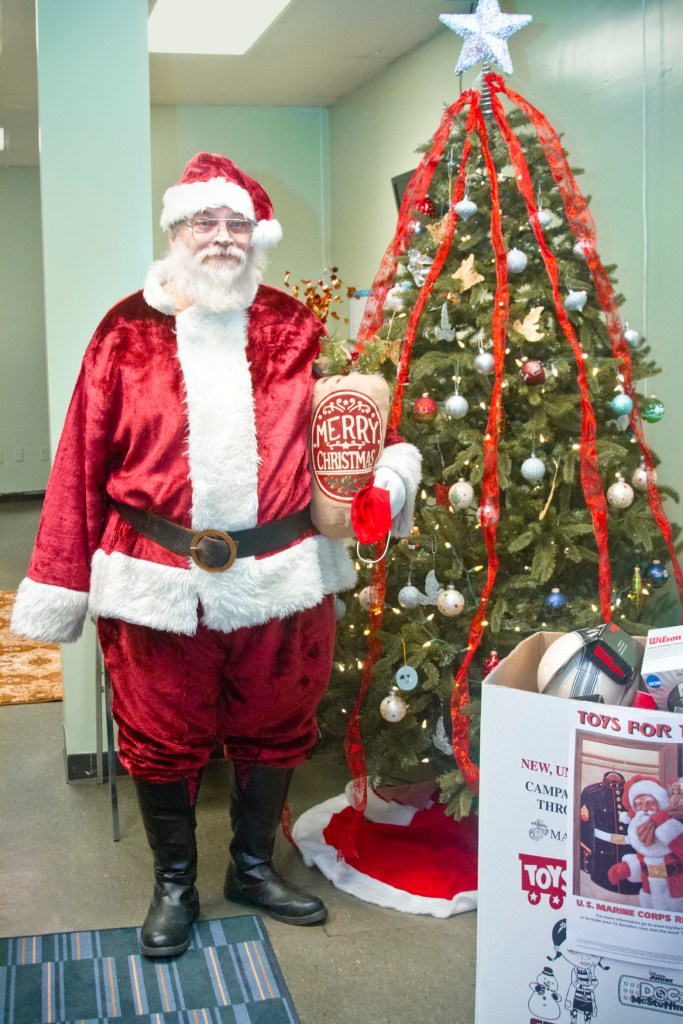 LAPLACE — Dudley Stadler III dressed up as Santa Claus for the first time when he was 18 years old.

He was a mischievous teenager, and his mother knew better than to leave him to his own devices at home as she took her Girl Scouts troop Christmas caroling through LaPlace. So Stadler was brought along for the ride, dressed in a Santa Claus costume to fit in with the theme.

Once the costume was on, he slipped into character with ease. A neighbor spotted him while Christmas caroling and offered him a drink. Stadler was quick to respond, “No, Santa doesn’t drink alcohol.”

More than 45 years have passed since that day. Now in his 60s, Stadler has portrayed Santa nearly every Christmas season, and he now has the long white beard to match his jolly persona.

Sometimes just putting on the bright red costume is enough to get him into the Christmas spirit. Sometimes he listens to an Iron Man parody called “I am Santa Claus” for inspiration.

“I’m not just playing the part; I am the part,” Stadler said. “I’m also a substitute teacher, which makes it quite interesting because some of the elementary school students will say, ‘You’re Santa.’ I don’t confirm it or deny it.”

Stadler has volunteered for charity work as Santa Claus over the years, whether it involved visiting schools, working with the Terrebonne Parish ARC or riding on the back of a fire truck alongside firefighters.

“Being Santa has allowed me to go to places that I’ve never been to before, and that’s pretty exciting,” Stadler said. “It’s also allowed me to meet a lot of friends.”
Most of Santa’s gigs are private parties, according to Stadler. This year marks Brooke Ory Powell’s third year hiring him for a holiday event, and she said it won’t be her last.

“Dudley makes an amazing Santa Claus because he shows up in full character completely embodying Santa until he walks back out the door,” Powell said. “He works great on a whim if you need to fill time in a crunch with holiday songs and stories – he knows them all. There’s never been a request I’ve asked of him that he’s turned down!”

Stadler recalled that Powell gave him his first solo singing gig as Santa. There have been countless memorable experiences through the years, including the time he greeted children at St. John Theatre in Reserve.

“I saw a priest sitting with a couple of other people. All the rest had gone to the back, and I told Father that he knew the reason for the season,” Stadler said.

Being Santa has made Stadler a confidant to children’s greatest Christmas wishes. The requests can be a little out-of-the-box. He’s heard a child ask for a baby brother and others ask for dinosaurs. One child recently asked for a hippo, which prompted Stadler to sing a rendition of “I Want a Hippopotamus for Christmas.”

Without knowing the families’ situations, Stadler can never tell children that they will get the present they asked for. He’ll tell them, “We’ll see what happens,” and send them off with a reminder to keep being good.

Santa visits have worked a little differently this year. With COVID-19 still spreading in local communities, Stadler is often masked when he dresses as Santa. Instead of sitting on his lap, children will stand next to him to pose for a picture.

Though it is different, COVID-19 hasn’t stolen Christmas magic from the hearts of children, and it is that magic that makes the Santa gigs so rewarding.
“Seeing the looks on the children’s faces is just so precious. I love being able to turn a child from crying to smiling. Some will come up crying because they are scared of Santa, and then they realize he is nobody to be afraid of,” Stadler said. “If they don’t wind up smiling, I tell the parents that it’s a good picture to show their boyfriend or girlfriend later on in life.”