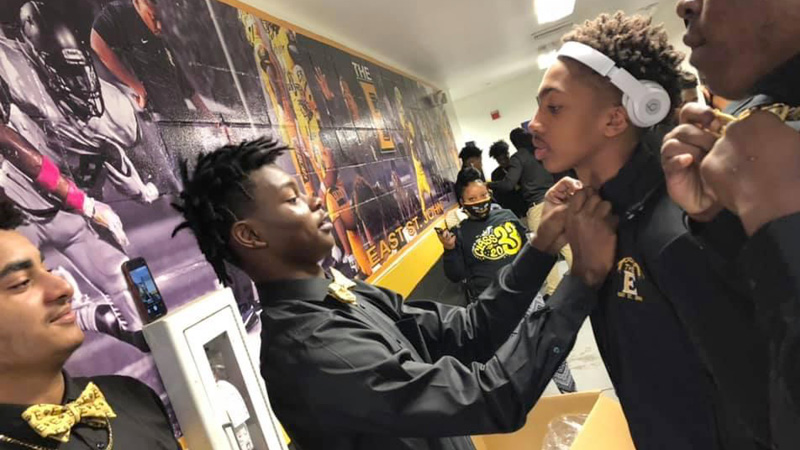 Teammates helped each other put on special East St. John bowties before hitting the road to face West Monroe.

MONROE – East St. John’s new standard got the Wildcats to the District 5A quarterfinals for the first time since 2006, but it was not enough to overcome perennial powerhouse West Monroe on the road Friday night.

It was a challenging game as the West Monroe Rebels came up big in the second half and pulled away with a 27-8 win, stealing East St. John’s dreams of semifinal and championship appearances.

West Monroe was the first to the scoreboard Friday night with an eight-yard touchdown from Derome Williams with 6:22 left in the first quarter. The extra point was no good, and the score would remain 6-0 in favor of the Rebels for the remainder of the first half.

The second half saw some explosive play from West Monroe, and the Wildcats were unable to keep up.

West Monroe’s Williams came up big again in the third quarter with a 35-yard touchdown run, bringing the Rebels’ lead to 13-0. With 4:45 left in the fourth quarter, Hayden Federico scored his first varsity touchdown and brought the score to 20-0. West Monroe’s Kade Pittard followed suit for another score.

East St. John finally found the endzone near the end of the game, but it was too late.

While the Wildcats lacked offensively Friday night, they put up a strong defense that stifled the Rebels at multiple points throughout the night. Quarterback Marcus Jackson also put up some good offensive play, slicing the Rebels defense early in the game.

East St. John ends the season with a respectable 7-2 record and an opportunity to make an even larger impact in Class 5A next year.