Championship Bound: Comets win in a 24-22 slugfest over Pios 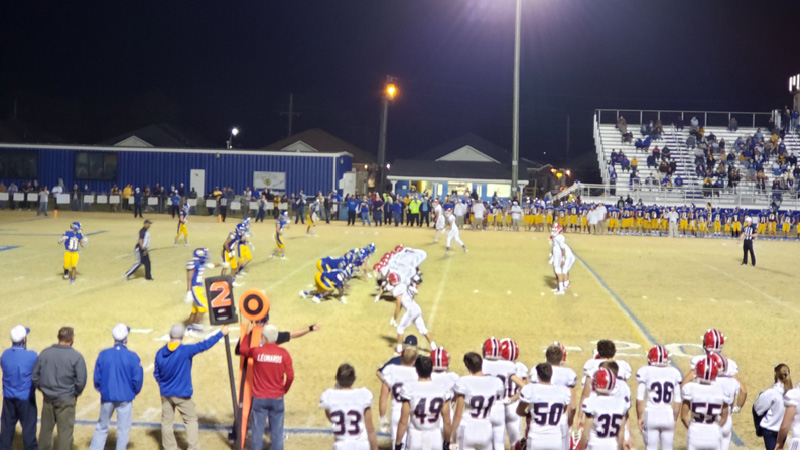 LAPLACE – If you ask St. Charles Catholic Coach Frank Monica, he was very sure that this Friday night’s game would be the most challenging game of the season. But watching the game against Notre Dame, the Comets made it look so easy.

The Pioneers traveled to LaPlace to face the Comets in the semi-finals of the Division III Playoffs. The No. 3 seed Pioneers came into the game with an 8-1 record with their only loss coming to three-time defending state champion Lafayette Christian.

The No. 2 seed Comets came into the game with a 6-2 record and a very stingy defense. The Comets defense had three shutouts this year and only allowed eight points per game. The Comet offense, defense and special teams contributed in a total team effort to defeat the Pioneers 24-22.

The Comets came out fighting, as they always do. However, Notre Dame struck first with a 28-yard field goal to take the lead 3-0 in the first quarter.

The Comets and the Pioneers went back and forth, stop for stop, until a 70-yard pass from Zack Vicknair to Kendell Harris turned into a touchdown run to make the score 7-3 in favor of the Comets by the end of the first quarter.

The Pioneers came back to take the lead when they scored a touchdown with 7:16 in the second quarter with a 10-yard touchdown pass from Parker Seilhan to Luke Yuhasz, bringing the score to 10-7.

The Comets brought the pain in the form of Keenan Gauff and Kendell Harris who made many big carries offensively, as well as Kamren Campbell, who made big stops, including an interception. A 35-yard field goal by Carter Chauvin to tie the game 10-10 at halftime.

The St. Charles special teams came up big in the third quarter when Mandel Eugene blocked a punt and the Comets recovered on the Notre Dame 27-yard line. The blocked punt at 11:01 in the third to set up a touchdown for Zach Vicknair, which put the Comets ahead 17-10 with a little more than 10 minutes left in the quarter.

Notre Dame battled back with a 16-yard touchdown pass, but the point after was no good.  The Comets led 17-16 at the end of the third quarter. This would very well come back to haunt them as the game progressed in the fourth quarter.

St. Charles scored again on a Vicknair 13-yard touchdown run. Vicknair started to pull out all the stops and made big carries along with Cade Pregeant and Kamren Campbell making major contributions on the defensive end. The Comets led 24-16 lead with nine minutes left in the game.

The Pioneers did not go quietly and scored again with only 58 seconds left in the game to make the score 24-22. Their two-point conversion failed when Prejeant knocked the ball away, and the Comets held on for the 24-22 thrilling victory.

St. Charles Catholic will advance to the Division III State Championship game against Lafayette Christian in a rematch of the 2019 Championship Game.

This year’s LHSAA state championship game will take place at Northwestern State in Natchitoches, rather than the New Orleans Super Dome, which has hosted the Prep Classic since 1981. The LHSAA announced the venue change this week in reaction to COVID-19 concerns and restrictions in the city of New Orleans.