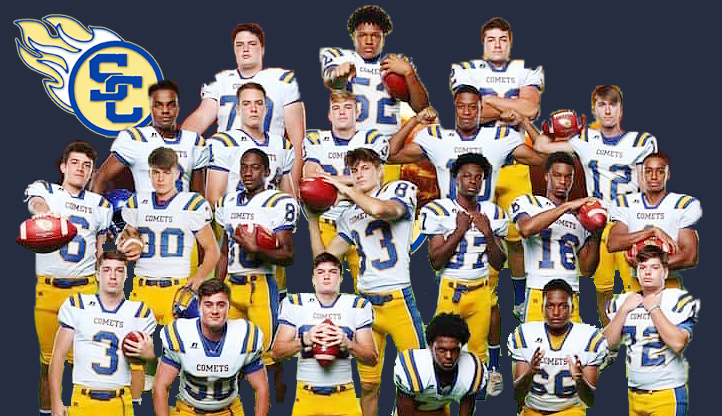 LAPLACE — The St. Charles Catholic football team has been down this road before! After Friday night’s 31-7 win over Dunham, the Comets are in the semi-finals again for the second time in two years.

The Comets made a tremendous and powerful showing for their playoff opener, as they held Dunham down to one touchdown in the Division III Quarterfinals. The Comets started in early and by halftime they led 17-0. Continuous pressure by defense and offense showed Dunham that the Comets were not giving this quarterfinal game away. Overall, the Comets were much too much for the Dunham and the Tigers fell victim to the Comet’s streak with a 31-7 final score.

Although their season was shortened, as all high schools around Louisiana due to the current COVID-19 pandemic, the Comets ended their regular season with an awesome 6-2 record. They have continued to advance through the Division III brackets to this week’s standoff against Notre Dame, which is not a pushover team.

Last year, they defeated Catholic NI in a double overtime of the semi-finals for the opportunity to travel to Lafayette and play in the championship game. So here we are, back in the same place. Can this Comet team redeem themselves and take the championship they lost grasp of last year?

This St. Charles Catholic team is well equipped to handle physicality for sure. Their defensive line is one of the best in the River Parishes, holding teams to scoring no more than 21 points at the most. Not to mention they held the undefeated Newman Greenies to a mere 14 points, which was scored in the first quarter, in which Newman never scored again in that game. So, it’s safe to say that St. Charles Catholic is more than ready for this upcoming challenge and with everyone healthy, the Comets can probably fare very well.

It is playoff time, and everybody comes to win or go home. The Comets have enough arsenal to make for an interesting game and should do very well. Performances by some of their key players will be greatly needed though if they hope to achieve the next level. Overall, the Comets are not new to tough teams nor playoffs. So, if you are looking for a great game to watch, definitely check out the St. Charles Catholic Comets this Friday at the new Thomas J. Dupuy stadium as they host Notre Dame for the semifinals game for Division III.