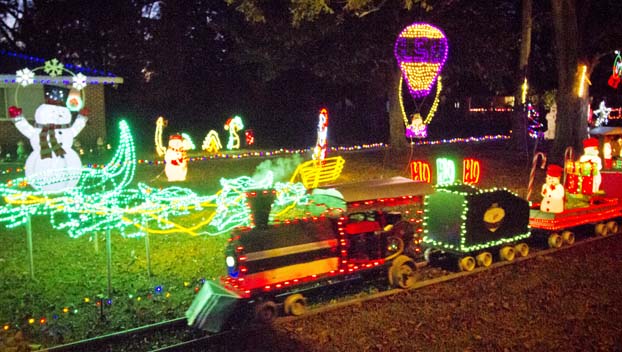 GARYVILLE — For the past 20 years, the Garyville Christmas Train has captured the spirit of the season and the hearts of neighbors who look forward to it each year.

Circling through more than 300 feet of track on Garyville Northern Street, the miniature engine weaves through dozens of stunning light displays in front of the Toups family home. 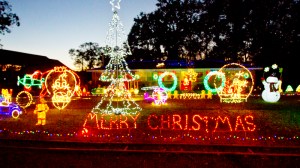 It’s been a labor of love for Herman and Celeste Toups. The Christmas light tradition started soon after they were married in the 1990s. It grew larger and larger after they welcomed their two daughters, Ashley and Jenna. According to Celeste, many of their family Christmas card photos through the years have featured the Christmas train as a backdrop. Improvements to the train are captured through years of photos, almost as if the Christmas display has grown up alongside the girls, who are now college aged.

Herman remembers the family taking an annual trip to City Park’s Celebration in the Oaks to take in the magic of the twinkling lights.

“That’s kind of our inspiration on a smaller scale in the subdivision. It’s what we do. It’s part of the season for us,” Herman said. “Over the years, we have brainstormed together to come up with ideas. We try to have one new addition every year.”

Some of the most recent light additions show methods of Santa’s transportation. One display shows Santa in a boat, being pulled by a crew of alligators. Another shows Santa flying in an airplane. 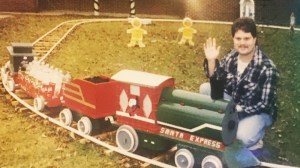 Herman Toups, pictured approximately 20 years ago, has continually improved the Christmas train that runs each night in his front yard.

While some of the light pieces are store bought, 80 percent of them are handmade or modified in some way by the Toups family. For example, Herman modified a stationary steam engine yard decoration to have blinking lights on its wheels, giving it the appearance of being in motion.

The Christmas train itself is a constant work in progress, according to Herman. 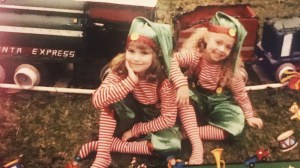 “It started off running on battery, originally made from one of the power wheel cars that the kids ride on. It went from the battery to buying a lawn mower engine to a car battery. Then it graduated to a generator,” Herman said. “The little motors we used that used to be plentiful on the Internet were discontinued. It’s gas motor driven now instead of electric motor driven. We turn it on every night when it gets dark, usually from 5:30 ish to about 9.”

The only nights the Garyville Christmas Train doesn’t run is when it is raining, according to Herman. Throughout the month of December, families pull in front of the house to catch a glimpse of the Christmas Train.

“There are times when cars are in the road. It’s not really a traffic jam because where we live is kind of off to itself. Most park in front of the fence and get out of their cars or roll the windows down,” Herman said.

Herman added that there is another Christmas light display only two houses down that gets a lot of attention from people in the neighborhood. He hopes the Christmas tradition will continue for generations to come.

“It’s kind of family built, and it’s just what we like to do,” he said. “With these crazy times of COVID, it’s something to ride around the neighborhood and see. It makes you feel good when you see Christmas lights.”