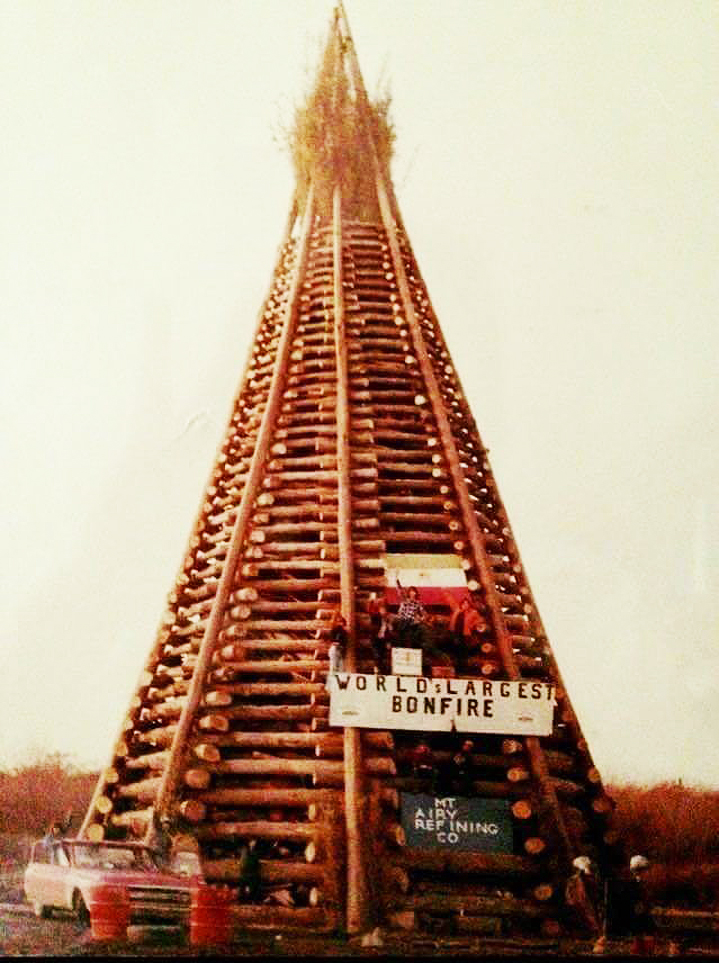 GARYVILLE — Last Christmas Eve, Josh Weidert of the Blood, Sweat and Bonfires group stood next to a 60-foot alligator creation and looked out to a crowd of at least 1,000 people gathered to celebrate a centuries old Louisiana tradition.

While 2020 has been a year of cancelled events and sacrificed traditions, Weidert assured the community that the Christmas bonfires on the levee will still move forward, albeit on a smaller scale.

Plans for another extravagant bonfire with moving pieces are being shelved for a year out of respect for those at risk of developing serious COVID-19 complications. This year’s “dialed down” bonfire creation will still be something special for the River Parishes, and it will call back memories for the men and women who had a hand in preserving Garyville’s bonfire tradition throughout the years.

Blood, Sweat and Bonfires will recreate a late 1970s photograph of the world’s largest bonfire. Built on the Garyville levee by locals, the traditional eight-pole ‘A’ frame bonfire stood 78 feet tall and held a world record at the time.

“This is one thing that will still go on. We just have to be safe about it,” Weidert said.

The replica of the photograph will be about 10 to 15 feet in height. This year’s bonfire creation will also include cutouts for the people and recreations of the signs in the photo.

The 1979 Garyville bonfire was built near Lion’s Park in Garyville and was one of the first bonfires to require heavy equipment in its construction. During the same year, the “Bonfire Builders of Reserve” disputed the world record claim, insisting their construction near West Sixth Street in Reserve was even larger. Both of the grandiose structures were lit on Christmas Eve 1979.

“Because we draw such a large crowd and everyone comes from different places to see our bonfires, we felt that for this year it would be best to scale it back down to a traditional style bonfire. If we do something like that, it might not draw such a big crowd, but it will still be something cool to do for the local community,” Weidert said.

“It’s still something fun for our crew to do. There’s a little more creativity behind it than a traditional bonfire. There are people still around today that helped build that bonfire. It brings memories back, and it will be a little tribute for Garyville.”

The Blood, Sweat and Bonfires crew acquired its 2020 bonfire application on Monday. If all goes according to plan, the guys can start working on the bonfire as early as this weekend.

Aside from COVID-19 concerns, another challenge this year is navigating around the ongoing construction of the levee bike trail in Garyville. Thankfully for bonfire builders, the St. John the Baptist Parish Council approved an extension order that allows the trail to loop down to the base of the levee. When completed, this will allow space for the Christmas Eve tradition to continue for years to come.

Weidert said next year’s bonfire will supersede expectations and promote visitor interaction. It will be even more intricate than the interactive alligator, pelican and snapping turtle bonfires that brought national attention to the little town of Garyville in recent years.

“It will be very pleasing to folks in Louisiana. That’s all I can say,” Weidert said.