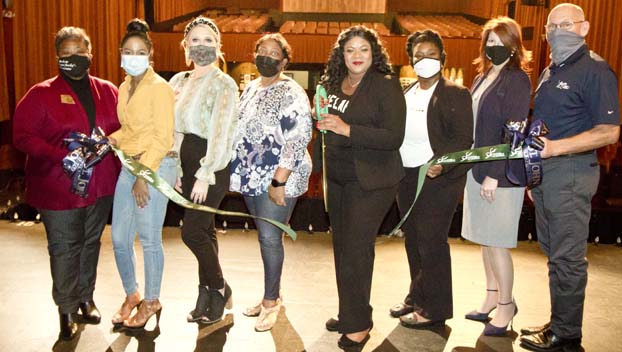 She was a youth director at a local church, known to many in the community as a former St. James Parish NAACP president. It wasn’t until she wrote her first play for the children at the church that the world caught a glimpse of the creativity she had bubbling just under the surface, ready to be unleashed.

Butler has penned seven public productions since her nonprofit was incorporated on Oct. 7, 2013. With a guiding mission to “aspire to inspire,” SeLah Productions has delighted the River Parishes and Southeast Louisiana with innovative, faith-based performances that prompt the audience to pause and contemplate life — something Butler refers to as “having a SeLah moment.”

A ribbon cutting was held this week at St. John Theatre in Reserve to reflect on the progress that has been made and celebrate what is yet to come.

Through public theater productions, film and television, the nonprofit is extending its reach on a global scale. Butler had an opportunity along with her bishop, Antoine Jasmine, to travel internationally and have a meeting with the president of Ghana.

By bringing theater to Ghana, Butler hopes to give back to the people of the country and eventually create jobs to bolster economic development.

“Now they will allow me to have a major production at the Central Theatre, the national theater in Ghana, and I will take my proceeds and give it to a local orphanage there to help them to continue building their school,” Butler said. “I’m not only going to hit Ghana, Africa. I’m going to travel throughout Nigeria. It’s going to be an international effort.”

While the play was delayed due to COVID-19, it is slated to take place in 2021. Butler is also looking forward to an upcoming production at the Orpheum Theatre in New Orleans titled, “Won’t He Do It.”

She’s also getting ready to produce a pilot of SeLah’s signature dinner theater show, “The Butler Did It,” which has been described as “a little New York in Louisiana.” Also in 2021, Butler expects to publish her book “Bossing Like a Lady,” which will help visionaries learn to manage large and ambitious businesses.

Though SeLah Productions has grown larger, there is still a focus on giving back to the community. Butler said food distributions will continue on a local scale into 2021 as St. John the Baptist Parish continues to grapple with the COVID-19 pandemic.

With so much to look forward to, Butler took a moment to reflect on how SeLah Productions came to be. She was greatly inspired by her mother, Joy Ann Woodland Butler, also known as “the mother of SeLah.” Supportive business sponsors and individual sponsors have also shaped the success of the organization.

At the very beginning, the community would flood the church to watch talented children bring Butler’s afro-centric monologues to life. One of the church members suggested she do a public production at a larger venue.

“I talked to Judge Snowdy, and he allowed me to have my first public production at St. John Theatre. I had 1,070 people attend that play between two shows,” Butler said. “I said to myself, ‘Wow, I have something here.’ Sometimes you can have a play and if you have 10 people, you’re blessed.”

SeLah Productions continued having plays at St. John Theatre in Reserve. As the crowds grew larger, SeLah moved to the Mahalia Jackson Theatre in New Orleans. That was the site of one of Butler’s favorite plays, “Lord, if I Can Help Somebody.” SeLah Prudctions has also found a home on stage at the Manship Theatre in Baton Rouge.

Butler won Playwright of the Year among 12 finalists from across the world in 2017 for her play, “If it had not been for the Lord.”

Butler said her plays reflect the real world, where the Lord is the director writing a script for our lives.

“At the end of the day, we can all become what the script is trying to get us to become. That is something positive to do a good work among our community and to have brotherly love so that we can unite as one to make our surroundings a better place,” Butler said. “We have to understand that we are not perfect people and that the Lord will bring us from darkness to His marvelous light. We have to learn how to be forgiven. We have to have unity. We have to love. One of my biggest sayings is that the sky is not the limit. If you put your mind to it, be persistent and pray, you can be anything that God is calling you to be.”

At the recent ribbon cutting, a cast member of SeLah Productions commented that it has been a blessing to get on stage and live out her passion for opera singing. Butler recalled another cast member’s elderly mother was immensely proud to watch her daughter on stage for the first time, fulfilling a dream she had always wanted to see her child pursue.