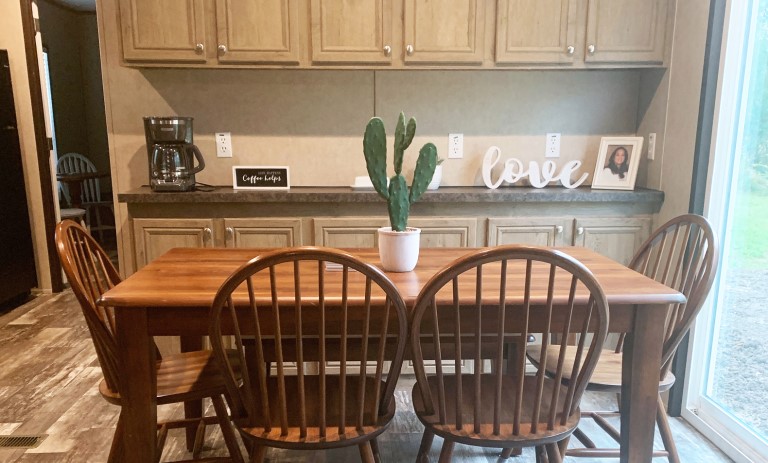 RESERVE — Twenty-four women coping with mental illness, divorce, domestic issues and release from incarceration have made Lynne’s House their temporary home in a journey toward recovery and restoration.

A grand opening and dedication was held Nov. 18 for Lynne’s House III, an expansion that will provide a safe space to house an additional four women. The beautifully furnished mobile home is located on the same St. John the Baptist Parish property as Lynne’s House I and II. Together, the three homes can accommodate 11 women in need as they complete a nine-month faith based recovery program.

Lynne’s House began as a vision that caught fire after Lynne Aguillard Venus unexpectedly took her own life, ending a long battle with bipolar disorder and depression.

Her parents, Rod and Mary Aguillard, were inspired by the scripture, “I tell you the truth, unless a kernel of wheat is planted in the soil and dies, it remains alone. But its death will produce many new kernels—a plentiful harvest of new lives.”

In death, Lynne planted the seeds for a harvest of lives to be restored. Just as one loss changed the path of his own life, Rod Aguillard sees the importance of reaching “the one.” According to Rod, restoring just one life makes it all worthwhile.

The first Lynne’s House opened its doors in 2018, after a $20,000 gift from Network of Related Pastors helped the Aguillard family purchase 4.6 acres of land in St. John the Baptist Parish and completely renovate mobile homes.

“We have a maximum of seven people between house one and house two. We’re full. We’ve been pretty full for a while, and we had a burden of needing more homes,” Rod said.

The St. John Parish Council passed an ordinance that allowed for the addition of more homes. In April, the Aguillards initiated fundraising efforts. A network of about 40 churches and countless compassionate individuals raised enough money for Rod to pay for a $65,000 mobile home in cash. A second fundraiser that ran from July to early October raised money for Mary Aguillard to fully furnish Lynne’s House III.

With all of the upfront expenses paid for, Lynne’s House III was ready to open this week. A new housemother has been hired to live with and oversee up to 11 ladies.

Rod and Mary are ready to see Lynne’s House III make a difference in the lives of women in distress.

“We’ve had 24 women come through. Most of them are functioning; several of them have gotten cars,” Mary said. “They’ve been restored back to their children and families and that’s the wonderful part of it, seeing them go through the process of getting jobs. It’s wonderful to see when they go forward. They’ve been stuck in bad situations and felt like they couldn’t get out, but as we pray, we believe God opens doors and God restores things in their lives.”

Lynne’s House is not a rehab, but a recovery home. Women must be fully detoxed from drug use prior to joining Lynne’s House and starting the 12-step Celebrate Recovery program.

When the ladies aren’t participating in the 12-step program, they participate in faith-based teachings and attend Sunday services.

Many of the ladies come to Lynne’s House without transportation and without a job, according to Mary. Others have come to without a high school diploma or a state issued ID.

Lynne’s House coordinators assist the ladies with getting jobs and other tools for success. One of the young ladies in Lynne’s House is currently being transported to her new job as she works toward her GED.

“It really takes a village for these ladies to do everything that needs to be done,” Mary said. “A lot of the time, they come in and they don’t have an ID or a social security card. They have nothing, and we have to get them through all those steps so they can maintain a job.”

Rod has seen success stories come out of Lynne’s House. One woman came in with depression and suicidal tendencies. She left in a much better mental state and went on to restore her marriage.

Another resident of the halfway house had endured rape, abuse and other horrors that no one should have to experience. She left Lynne’s House in joy and peace, according to Rod.

“There’s one story after another where we’ve helped ladies come out of the dark woods of life,” he said. “We would like to think that in nine months to a year, they will be recovered. If they need longer, they can stay. We had one lady who recovered within five months.”