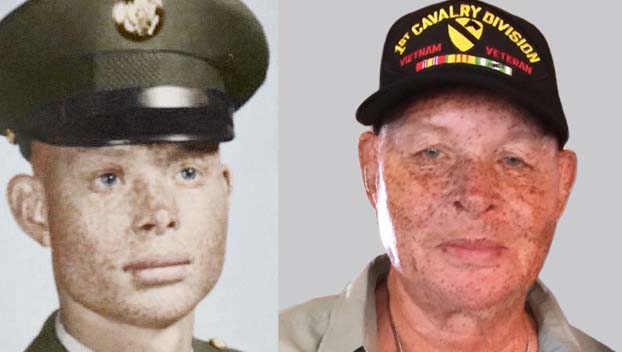 BURRELL: Remembered as a doting father

EDGARD — Devin and De’Shaun Burrell will always remember the day their father, Andrew Burrell, revealed to them that he had fought in the Vietnam War. They were renting the movie “Forrest Gump,” and the combat scenes on screen called back a profound time in Burrell’s life.

However, Burrell didn’t share most of his stories about Vietnam until his children were young adults. Burrell, known affectionately as “Freckle” to those who knew him, enlisted in the United States Army in 1967 and became a SP-4 with the First Calvary Division in the Vietnam War. While overseas, he spent two years fighting for his country on the front line.

Burrell departed this life on April 2, 2020 at the age of 75, but his legacy will live on for years to come.

“Vietnam is one of those things he talked about once we became a lot older,” his son, Devin, said. “Around my junior year in high school, he started expressing a lot more about Vietnam, and it was one of those things that profoundly affected his life in a positive but also in a negative way.”

Burrell’s experience as a veteran made him work harder in life. He was always careful to do the right thing, and he always put others’ needs before his own.
“With veterans, a lot of people don’t talk about the after effects of the war, and a lot of them feel as if they are still at war,” Devin said. “My dad had challenges like many veterans, but he stayed above the water. He always kept going.”

Burrell often wore his Vietnam cap and always advocated for more acknowledgement for veterans. He was a social butterfly with a heart for his community, and he loved to share his story.

Burrell was a St. John the Baptist Parish native born to the union of the late Guy Sr. and Corrine P. Burrell on March 5, 1945. The fifth of 15 children, Burrell spent the first eight years of his life in Lucy before moving to “Pierre Town” in Edgard. His family embraced their French-Creole heritage and attended the nearby St. John the Baptist Catholic Church.

Burrell excelled in sports at Second Ward High School in Edgard from 1963 to 1965 but ultimately ended up receiving his high school diploma from Presidio of Monterey School in 1967.

Burrell voluntarily enlisted in the United States Army in 1967 and served until 1970.

“He had a fear that he was going to get drafted, so he was staying on top of it,” Devin said.

Burrell’s daughter, De’Shaun, talked with her father about his time at war. Burrell always remembered seeing a Vietnamese child, a mere pawn of war, wearing a backpack with a bomb intended to blow up U.S. troops.

Cookies sent from his mother and letters from his cousin helped Burrell persevere through difficult times, as did his faith.

In Vietnam, every soldier in the infantry took a turn serving at point, where they were most at risk of being killed. When Burrell survived his turn at point, he talked to God and knew there was more in store for his life.

After receiving honorable discharge from the Army, Burrell studied at Howard Community College and received a degree in business management. He later moved to Pennsylvania and worked as a food service worker and manager at the VA Hospital. Burrell found his way home to Louisiana, where he retired from Praxair after 30 years as a technician.

In his later years, Burrell participated in monthly meet-ups with veterans that would get together in LaPlace. Even at age 70, he could point at names of people he enlisted with and recount each of their stories.

Burrell was honored for his service at the St. John the Baptist Catholic Church Fourth of July celebration in 2017. His family remembers him as a hero, an excellent cook and a doting father.

Devin recalled that his dad was always looking over his shoulder. He was the type of father who followed his children to their college campus to make sure they knew where they were going. If he sensed his child was having a rough day, he would not sleep until he knew what was wrong.

De’Shaun will always treasure Tuesday nights spent with her father at River Road Supper Club, a business her brother opened in Lucy in 2017. The business became known as “Freckle” to the community because of her father’s dedication to spending time with his family at the site.

Burrell went into sudden cardiac arrest on March 31, 2020 and passed away April 2, 2020 at St. Charles Hospital in Luling. He was laid to rest April 9 at the St. John the Baptist Catholic Cemetery.

Burrell was preceded in death by his parents, the late Guy Burrell Sr. and Corrine P.

Burrell’s family will have a memorial service for him at 10 a.m. on Friday, Nov. 13 at St. John the Baptist Church in Edgard. Masks will be required and social distancing will be enforced.