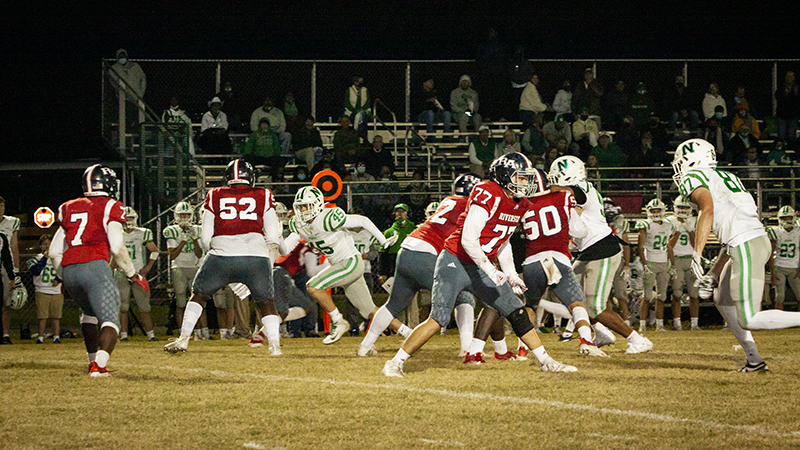 RESERVE— When the Riverside Academy Rebels and the Isidore Newman Greenies met on the Mickey Rousseau Field Friday night, the Rebels knew they had to stop Arch Manning. Newman knew they had to contain Gage Larvadain.

Larvadain has quietly amassed some unbelievable numbers for the 2020 season. After four games, Larvadain has 820 yards rushing, 247 yards receiving, 115 yards passing and 50 yards as a returner with one interception while playing in the secondary on defense. He came into this game averaging 14 yards per carry and 30 yards per reception.

Manning came into the game with 932 yards passing after four games, but the Newman running game would do the most damage on Friday night as the Greenies would run past the Rebels 31-26.

Riverside scored again at the end of the first quarter on a 35-yard pass from Larvadain to David Reynaud. Larvadain ran in the two-point conversion for the 14-7 lead.
Newman tied the score 14-14 on a Manning 1-yard run right before halftime.

Riverside did a good job containing the Greenie passing game by holding them to only 21 yards passing in the first half. Newman received the ball first in the second half and continued to find success running the ball. The Greenies took the lead 21-14 on a 4-yard touchdown run by Scott.

Riverside got into scoring position on a 42-yard pass from Larvadain to Andre Murphy to the Newman 6-yard line. Larvadain scored a touchdown on a 6-yard touchdown run, but the two-point conversion attempt was no good. Newman led 21-20 late in the third quarter.

The Greenies moved the ball into Riverside territory once again, but the Rebel defense held them to a field goal as Newman increased their lead to 24-20. Riverside moved the ball into Greenie territory on their next possession, but the drive stalled on the Newman 10-yard line as the Rebels turned the ball over on downs. Newman capitalized by driving the ball down the field with a heavy dose of running by Scott. Manning scored his third rushing touchdown of the night on an 11-yard touchdown run to increase the Newman lead 31-20.

With less than four minutes to go in the game, Hymel found Murphy in the middle of the field for a 52-yard catch and run for a touchdown as Riverside trailed 31-26. Murphy finished the night with three catches for 105 yards for the Rebels.

Newman received the ensuing kick with 3:21 remaining in the game.  The Greenies used a dominating rushing attack to run down the game clock and preserve the 31-26 victory. Sterling Scott finished the contest with 196 yards rushing for the Greenies.

Newman moves to 5-0 for the season and will host St. Charles Catholic next week. Riverside will travel to face St.Martin’s Episcopal next Friday.