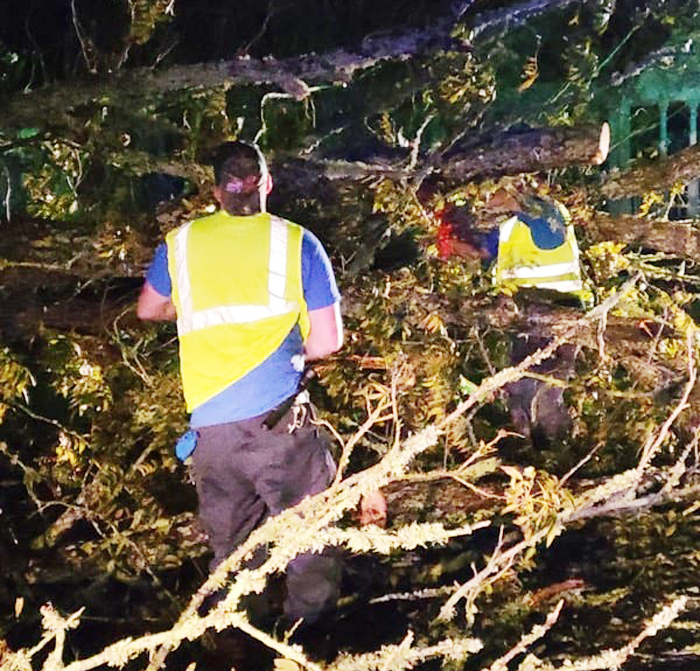 Officers and inmates remove branches from a fallen tree out of the roadway on West Fifth Street during Hurricane Zeta.

LAPLACE — St. John the Baptist Parish was spared the worst from fast-moving Hurricane Zeta, according to Parish President Jaclyn Hotard.

Hotard reported that St. John Parish experienced no incidents related to critical infrastructure or damaged homes. However, the area did experience widespread power outages, fallen trees on roadways, downed power lines and other nuisances that can be expected from hurricane force winds.

Entergy reported 6,385 outages in St. John Parish during the peak of the storm Wednesday night. By 11 a.m. the next morning, a little less than half of customers had power restored, according to the Entergy website.

Power outages led to St. John the Baptist Parish Public schools keeping doors closed for the remainder of the week.

In the hours preceding the storm, Hotard and the Emergency Operations Center opened a shelter of last resort for residents whose homes cannot withstand high winds. Three residents sought shelter at the East St. John Preparatory Gymnasium, located at 400 Ory Drive in LaPlace. Residents were responsibly for transportation and for bringing food, clothing, bedding and other necessities.

Hotard said most of the challenges during the storm came from trees and power lines blocking roadways. Parish crews responded fast enough to avoid large road closures and emergency situations.

“Parish crews were out checking drainage and utilities systems, ensuring all pumps were operational, canals and drainage outlets were pumped down and picking up tree limbs and other debris prior to the storm’s arrival,” Hotard said. “Crews were on standby responding during and after the storm and are continuing to remove debris from roadways and assist with clean up and recovery efforts.”

Hurricane Zeta marked the 27th named storm of the 2020 Atlantic Hurricane Season. If another storms, this season will tie with 2005 for the most tropical systems to form in a single season on record.

Zeta also made history as the strongest storm on record to ever strike the United States this late in October.

While these storms each brought impacts to Louisiana, Hurricane Zeta most directly impacted St. John Parish with sustained wind speeds of 35 to 45 miles per hour.

“I think most people did have a little bit of hurricane fatigue from a busy season, but we can’t thank our residents enough who continued to prepare for Zeta and stay informed as they have done all Hurricane Season,” Hotard said. “We appreciate their patience and cooperation and want to remind them that unfortunately Hurricane Season isn’t over until November 30.  Every storm is different, and we must remain prepared to respond with anything that comes our way.”

In May 2020, Hotard hosted a Facebook Live with WWL Channel 4 meteorologist Dave Nussbaum. At the time, experts were projecting a season of 16 to 18 named storms, noting a typical season has 10 to 12 named storms.

Above average water temperatures in the Atlantic and the La Niña phenomenon in the Pacific set the stage for an active hurricane season, according to Nussbaum.