One community, one heart: Neighbors work with officials to remove downed tree from River Road 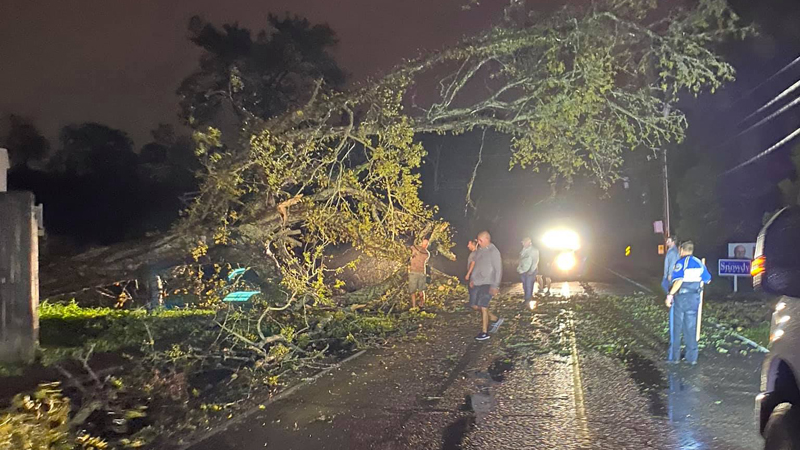 Neighbors and officials work together to remove a fallen tree from River Road near Walnut Street and Sycamore Loop.

LAPLACE — Neighbors, officers, a St. John Parish worker and an Entergy worker came together Wednesday night to clear a fallen tree on River Road, allowing responders to restore power faster to nearby homes in LaPlace.

Hurricane Zeta’s swift movement brought an hour of intense wind and rainfall to the River Parishes Wednesday evening, packing isolated gusts up to 100 miles per hour. During a break in the rain between the front end and back end of the storm, Aaron Lions of LaPlace was among the residents who ventured outside to assess the damage.

His eyes were drawn to a downed tree blocking River Road near Walnut Street and Sycamore Loop.

“In the middle of the storm, we kind of had our down time, and people started coming out from their homes because it wasn’t raining. We looked around and we saw the tree on River Road with the two St. John officers blocking the road and the tree going across it,” Lions said. “I’ve got a chainsaw and my neighbor next door is pretty good with one, so he said let’s go out there and clear the tree so cops can go back to doing what they need to do.”

Joey Mason of LaPlace manned the chainsaw as his brother, Jerry Mason, Lions and other neighbors from the area helped clear debris from the street. The officers, a St. John the Baptist Parish worker and an Entergy worker assisted in the effort.

“It was kind of like a swarm. The Entergy guy was out there to say that the power was clear for us to do it. St. John Parish showed up, and they helped a little bit with manpower. Everybody worked together to try to make it clear,” Lions said. “It only took us about 45 minutes with all the help we had.”

Thankfully, the back half of the storm didn’t pack the same power as the first half. Power was restored to surrounding homes by about 11 p.m., according to Lions.

“The Entergy guy actually said us doing what we did helped them to be able to get power back on faster by clearing brush out,” Lions added. “It was just a good thing we had a good chainsaw and we had a good, strong young man to use the chainsaw and other people dragging branches out to clear the road.”

As a former deputy for nine years, Lions understands the importance of staying safe during a storm response.

“If Entergy would not have been out there to tell us the lines were dead and safe to cut without the chance of anyone getting shocked we would not have cut the tree,” Lions said.

Residents considering cutting up a fallen tree should always wait for Entergy officials to give the all clear.

Approximately 5,000 Entergy crewmembers were on the ground Thursday restoring power to customers.

As of 2:30 p.m., the outage maps indicated that 1,083 customers were still out of power in St. John the Baptist Parish, an improvement from 6,385 customers out of power Wednesday night.