The Demon of Evangeline Road 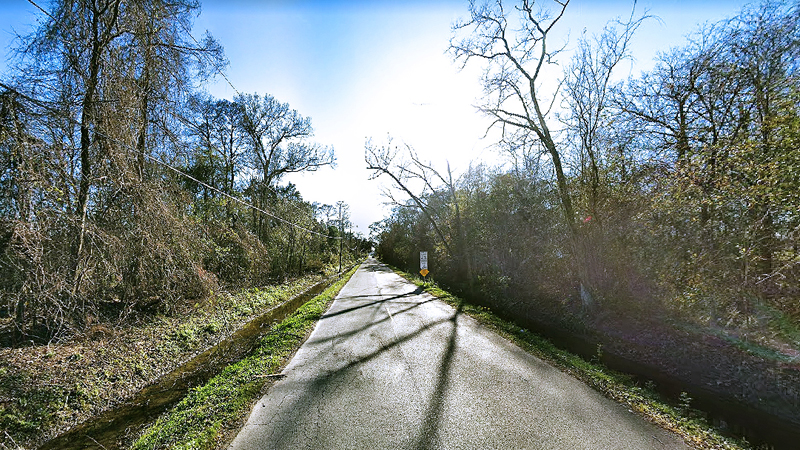 Evangeline Road in Montz was rural and eerie enough to spawn urban legends in the 1970s.

Grunch Road is a legend about a creature that frequently haunted a rural road that ran through the swamp when New Orleans was still in its infancy. The Grunch’s origin has direct ties to the exalted voodoo priestess Marie Laveau. Anecdotal sightings of The Grunch turned into a legend. The legend grew in fame and geography. Many swampy towns that surrounded New Orleans adopted Grunch Road as their own. In the 1970s, Evangeline Road in Montz was still rural and eerie enough to give birth to its very own legend and was dubbed Grunch Road by anyone who would tell the story.  Names have been left out for the sensitivity of the surviving families.

Halloween of 1976, Montz, Louisiana. Four local high school seniors pulled off Airline Highway onto Evangeline Road. The last notes of “Monster Mash” echoed through the foggy swamp. The driver stopped his ‘69 Ford LTD at the mouth of the road and lowered the radio as the disc jockey put on a wacky impression of Count Dracula.

A debate broke out about whether they were going to go through with the silly ritual or not. Before a unanimous vote could be made, the driver used his position behind the wheel as an advantage. He let off the brake and the car started to idle forward. The driver applied a small amount of pressure to the accelerator and increased the volume of the radio. The DJ’s yacking was over and a new song that was gaining popularity began to play. Cowbells rhythmically called out of the speakers as Blue Oyster Cult’s “Don’t Fear (The Reaper)” began to play. 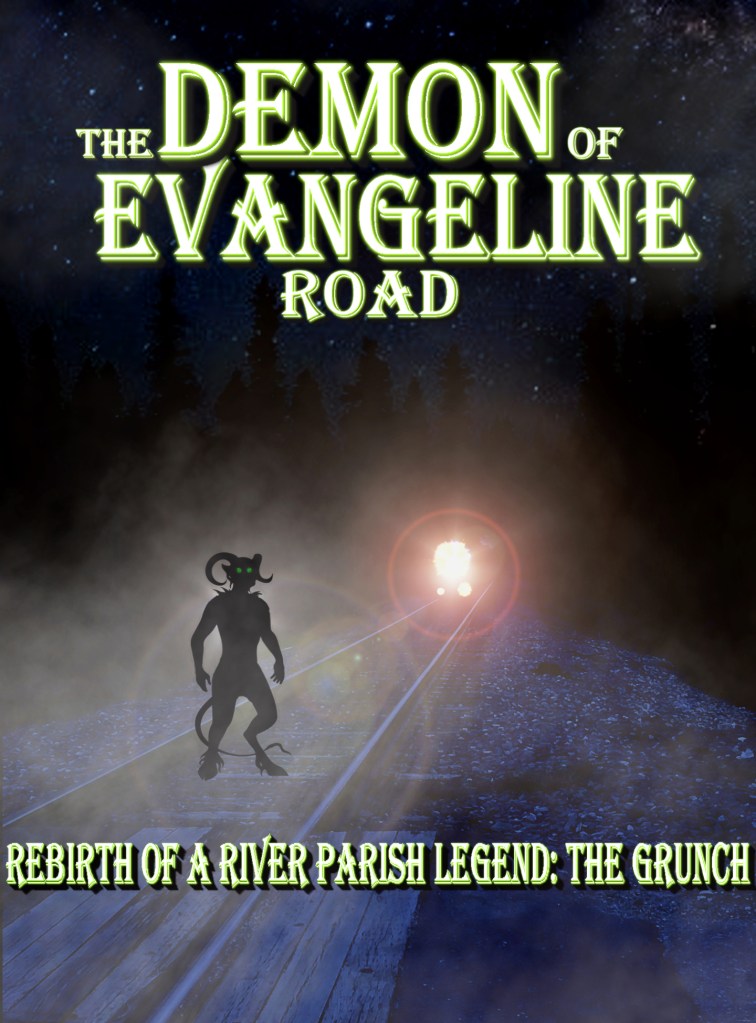 The newly minted high school seniors cruised down Evangeline at an easy pace until they reached the railroad crossing. The driver sported a mischievous smile on his face as if he was feeding off the fear that his girlfriend and his best friend’s girl were expressing. The driver’s best friend was laughing nervously, but noticeably not as joyful as his friend. The driver broke out into a speech that seemed eerily rehearsed.

“Ok, y’all! Remember the plan. We park on the track, I’m going to turn the car off and honk the horn nine times. Then we all get out of the car and walk around it three times. All of us have to do it or it won’t work. If we do that correctly the Grunch is supposed to come out of the swamp to accept our offerings.” The driver’s best friend clutched a K&B bag that was sitting on his lap. The bag held the offerings. (K&B whiskey, white owl cigars, and ice cream because K&B did not have milk)

The car came to a complete stop on the railroad tracks. The driver shut the engine off, put the keys in his front pocket, and proceeded to sound the horn nine times. He opened the driver’s side door, looked around at his friends, and said,

“Three times around! No chickening out!”

The passengers reluctantly followed the driver out of the car and quickly formed a line behind him. The march around the vehicle began. After many “hurry ups” and fright-induced squeals from the girls, the group completed the journey around the car three full times.

The rest of the passengers got back in the car while the driver grabbed the bag from his friend. He placed the offerings on the hood of the car and said,

“When the Grunch comes to get his gifts, I want to get a good look at it.”

The driver scanned the area as he slowly climbed back into his car.

The two female companions immediately proclaimed the summoning as a failure, their attempt to get the driver to leave this eerie crossing.

“Now we wait,” said the driver as he lit a cigarette.

The chatter in the car was stifled to nervous whispering after the driver told everyone to shut up so he could listen for the Grunch’s approach. After the cigarette was finished the driver finally gave up and decided it was just a stupid urban legend that they proved to be a myth.

The driver aggressively opened his door and got out of the car. Pissed off and disappointed, the driver threw the offerings off the hood, except for the whiskey, which he kept in hand as he got back into the driver seat.

“This was dumb, let’s go back to my house and empty this bottle!” said the driver as he turned the ignition, but the car failed to start. The engine turned a few times but choked out in that tell-tale mechanical death rattle that occurs when combustion is not obtained.

Panicked cries from the girls and flurry of obscenities flew out of the driver’s mouth as the car sat dead on the tracks. Again, the driver tried to start the car, but this time there was only a click. “Dead battery? What a bummer!” said the driver’s friend in a nervous tone.

The driver tried for a third time to start the car, hoping for a miraculous outcome but he knew the battery needed a jump. With no surprise the third attempt failed, but what happened next utterly startled the car full of seniors in equal measure. The ice cream the driver had hurled off the hood and into the fog had returned, crash landing on the hood of the car. Both masculine and feminine screams filled the car and echoed into the misty swamp surrounding the train tracks.

“Calm down! Someone is messing with us!” the driver yelled, to reassure both himself and his friends.

An eerie silence took grasp at the passengers’ throats as their eyes locked in a forward-facing gaze. The eerie silence seemed to take hold of the entire area surrounding the railroad crossing as every insect and frog seemed to be raptured out of earshot. Slopping thuds accented by clicks and taps approaching was the only sound that hung in the air. Out of the fog, a figure started to emerge. Walking up the incline of the railroad tracks toward the car, was the demon of the swamp. Standing six feet tall, upright on double-jointed goat-like legs covered in pale green mossy hair, the Grunch walked at a dreadfully slow pace.

The teens inside the car sat completely still, stuck in place by fear like atmospheric glue, drowning in the strange vacuum that seemed to affect the surroundings. With every step, the Grunch became more visible to the passengers as it emerged further from the thick fog that surrounded the railroad crossing.

The entity that approached was different from how the legends describe. In the stories, he was always portrayed as a dangerously handsome man with legs of a goat. The style of legs was close to accurate but the legs that belonged to this creature were more like a Victorian painting of a demon. That is where the similarities end. The torso was humanoid but covered in a scaly reptilian skin like an alligator’s belly. The arms were long and muscular and led to hands with four sharp black claws. There was a fifth black talon-like protrusion coming from the wrist that gave the appearance of a thumb. The face was humanoid in structure but reptilian in definition. Demonic glowing green eyes flashed under a set of curved horns coming out of the demon’s forehead. Spines like an iguana but more severe ran down the demon’s spine to the tail. Vampiric fangs showed in the creature’s snarled mouth. The demon of the swamp spoke inside of the minds of the high school seniors.

“You have brought me such fine offerings…” said a slithery whisper in the teen’s head.

At this moment the driver as well as his friends realized that they were not just simply frozen by fear. Their consciousness was the only thing unshackled. Free to think about what they were seeing, free to feel every ounce of fear, and free to realize that despite the overwhelming urge to leap out the car and sprint back to Airline, they physically could not. The teens were stuck in place by an unseen force that could only logically be attributed to the Grunch. The seconds took years to pass, and at this point, logic was a loose construct.

The Grunch took one more step closer before it stood in place as it savored the teen’s fear. A light began to fill the inside of the car. A light that came from the passenger side window and seemed to grow brighter. In a moment of confusion, the driver and his friends felt joy because they knew this experience was about to be over. The Grunch continued to observe, and relish as the inside of the car was now totally engulfed in light.

It took until sunset on All Saints day before the Parish Coroner’s office was satisfied they had recovered enough remains to identify the bodies. The car had to be identified by its license plate because it was in even more pieces than bodies after the train tore through it.

The biggest mystery of the night wasn’t the tragic death of four high school seniors; It was the unbroken, unopened bottle of store-brand whiskey, placed in the center of the railroad crossing on the neatly folded K&B bag.

Chase Ferguson is a River Parishes resident who decided to his extra time during the COVID-19 pandemic to finally scratch the creative itch he has had most of his life. The inspiration for this piece came from stories his mother and uncle would tell about Evangeline Road in Montz.