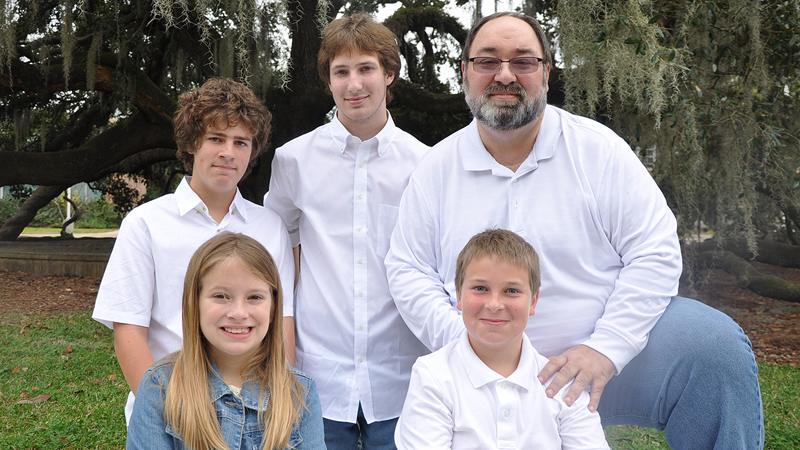 Gary Dupré, right, is pictured with his children Kyle, Jon, Sarabeth and Ethan in this 2015 photo. His children now range in age from 13 to 20.

LAPLACE — L’OBSERVATEUR administrative assistant Gary Wayne Dupré was “born at a very early age,” and he passed away the morning of Sunday, Oct. 25.

He loved good music and was a big Styx fan. As a young man he was a musician, and as he grew older he became a grumpy old man that did not want people on his lawn. He enjoyed British humor and the non sequitur. He prided himself on his ability to use words and he liked to play with words. He considered himself an unsung comic and when he wrote something he particularly liked but others didn’t he’d say, “Come on, its comedy gold.” Really not everything he wrote was comedy gold, but we did not tell him that.

He grew up with French speaking grandparents nearby and would slip foreign language phrases into conversation. His favorite was probably “Mon Dieu,” and because he had been a teacher for many years of his life there were certain words that just would not do in the classroom. When he was aggravated, he could often be heard muttering “feces”.

I have only known Gary for a year and some odd months and cannot share all of the memories his loved ones hold close to their hearts. One year of knowing him, however, was more than enough time to come to admire his irreverent humor, love of music, strong opinions, intelligence and countless hidden talents.

Only months after discovering his talent for writing, Gary entered a Louisiana Press Association competition and received the following accolades: first place in best individual editorial, second place in best individual editorial, and second place for the Sam Hanna Award (Best Individual Column). Gary’s work as a budding writer captured the attention of syndicated columnist Rix Quinn, who was beginning to foster a mentor relationship with him.

I clearly don’t have the same knack for weaving double entendres (triple if he could get away with it) and witty comebacks into my writing. I know he would want something lighthearted and humorous written in his honor, so I will let his columns speak for themselves.

In his “Get Off My Lawn” series, Gary painted himself as a cheer-challenged Grumpy Old Man™ faced with a vile nemesis, “Mr. More-Importanter-Than-You.” He railed against Internet trolls with Cheetos-stained fingers who devise online scams while waiting for mommy to cut the crust off their PB&J.

Gary wrote an entire column based on a photo of a curly-haired dog with sunglasses that looked a little too much like Jeff Lynne. That photo brought him so much amusement, he printed and framed it to display on his desk.

But my favorite “Get Off My Lawn” columns are the ones that delved into the past and chronicled the generational stories of the Dupré family. I was introduced to his father, Wayne Jude Dupré, whose early years consisted of a series of mischievous deeds including but not limited to locking his mother out of the house, attempting to jump off the roof and leaving a brown-hued Picasso on the walls of the bathroom. Gary joked that he found two business cards for exorcists in his grandmother’s Bible.

He wrote column about staying with his grandmother, one of the aforementioned French speaking grandparents, when he wanted “p’tarts and manamna”. This was always one of his favorite stories from childhood. He was staying with Mama Eta and he wanted Pop Tarts and Sesame Street, but poor Eta had no idea what he wanted. A truly funny thing that amused him immensely was when he wrote it, looking for the spelling of the childhood memory, he discovered that the music from Sesame Street’s “Manamana” was originally from an Italian “adult” film.

Gary shared the story of his own personal Nightmare Before Christmas (not of the Tim Burton variety). After working ferociously to assemble the model of a T-Rex that he received as a gift, Gary caught a glimpse of the king of all dinosaurs glowing in the dark and threatening to put an end to the Dupré name. Thankfully, the comforting arms of his mother, Jacqueline Falgout Dupré, were not far away.

I imagine Gary is happily reunited with his mother in a higher realm. I bet he is jamming with Jerome Michael Theriot, his dear lifelong friend who he worked alongside to teach musically advanced students. In a column he wrote in July 2020, Gary recounted their decades of friendship and said he was sure Jerome had been named to God’s All-Star House Band. I think Gary is joining those ranks, too.

Most of all, Gary talked about the unmatched joy he got from being a father to his four children, Jon, Kyle, Ethan and Sarabeth. I know he was immensely proud of each one of them, and they were truly the light of his life.

I will always be thankful to Gary for joining our team. Half our staff moved to Texas in June 2019, and I was on a fast track to a stress breakdown while trying to balance new job responsibilities when Gary stepped in. He eased the burden for me more than he realized, and for that I am grateful.

We spent countless hours together as a close-knit team of three, working together (almost) seamlessly from early in the morning to late in the evening.

Gary’s loss is yet another Great Tragedy of the year 2020.

Rest in peace, Gary Wayne Dupré, because you will never be forgotten, and our office won’t be the same without the sound of your voice.