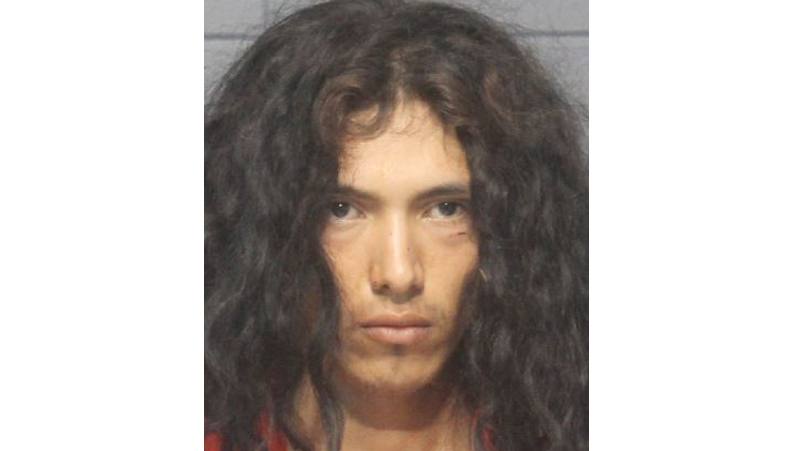 Oscar Urias was arrested in connection to an attack that left two dead and two injured Sunday afternoon in LaPlace.

LAPLACE — The carnage that took place this weekend was some of the worst St. John the Baptist Parish Sheriff Mike Tregre has seen in his 32 years of law enforcement.

Oscar Urias, 23, was arrested after wielding knives to kill his 31-year-old girlfriend and her 15-year-old sister in a brutal attack that began on Fairway Drive in LaPlace. Urias also attacked his two teenage siblings, injuring his 15-year-old brother and leaving his 17-year-old sister in critical condition with multiple stab wounds.

Urias was being held at the St. John the Baptist Parish Sheriff’s Office Monday afternoon after giving a full confession. However, Tregre announced that Urias was being transferred to a state facility equipped to hold subjects that are considered serious threats. He is currently charged with two counts of first degree murder and two counts of attempted first degree
murder. A bond had not been set as of the time of this writing.

The attacks occurred at approximately 4:30 p.m. Sunday, Oct. 25 at a residence in the 1800 block of Fairway Drive in LaPlace. According to police, Urias is from El Salvador and is in the United States illegally. Authorities do not have any information on his criminal history. Tregre said Urias and his girlfriend, Elizabeth Tornabene has only resided in the Fairway Drive house for about one month.

Through investigation, officers learned that Urias, his girlfriend and their respective siblings were talking in the living room when Urias went into the bedroom. Tornabene followed him. Shortly after, Urias emerged from the room wearing a mask and wielding two knives, one of which could be classified as a machete.

As Tornabene’s 15-year-old sister and Urias’ 15-year-old brother fled from the residence, Urias hunted them and managed to capture the girl before stabbing her in an open garage at a residence in the 2400 block of North Sugar Ridge in LaPlace. The 15-year-old girl was killed during this attack. Tregre reported that the North Sugar Ridge homeowner was watching football when he heard screaming coming from his garage. When he saw the attack taking place, he screamed, “What the f*** are you doing?”

As the perpetrator began to advance toward him, the homeowner closed the door, braced against it and ordered his family upstairs to seek shelter, likely saving their lives in the process.
Meanwhile, Urias’ 15-year-old brother flagged down a passing motorist to ask for help. The motorist called 9-1-1. Officers arrived and gave the young man medical attention.

According to Tregre, that’s when officers were made aware that a subject was down the street assaulting and stabbing the 15-year-old girl.

“Officers got a team together and proceeded down the street. When we got to the residence, he was in the garage. Officers approached him coming out of the garage and ordered him at gunpoint to drop his knife. And he did. He was taken into custody at that point in handcuffs,” Tregre said.

The young boy, who was also visiting from Baton Rouge, was treated at University Hospital and released. Tregre said officers did their best to save the lives of other victims in the attack by applying tourniquets.

“There is no way to train for this, to mimic what took place yesterday, but they still stood tall, they stood strong, and they tried their best to save lives,” Tregre said during a press conference Monday. “This was a very vicious attack. It’s very sad, very painful to even see all the stuff that transpired.”

Tregre did not indicate a precise motive for the attack, only stating, “We believe there was some type of argument that transpired between him and the girlfriend.”

Detectives obtained a court-ordered warrant to draw Urias’ blood for further analysis to determine whether the influence of drugs was a factor in this incident.

Shondrell Perrilloux, president of the St. John the Baptist Parish branch of the NAACP, urges the St. John District Attorney’s Office to fight for justice in this gruesome case.

“After discovering this information, it really troubled my heart. In my capacity as the president of the St. John the Baptist Parish NAACP, I am calling upon our district attorney to prosecute this matter to the full extent of the law,” Perrilloux said. “This is normally not my position when dealing with criminal activity, but the facts around this are heartbreaking and devastating. I strongly believe our district attorney will look at this through the same lens as us to see that this is very troubling and that justice must be served.”

Reserve Homicide
In addition to working on the Urias case, St. John the Baptist Parish officers are investigating an unrelated weekend homicide that claimed the life of 21-year-old Nicholas Paylor of Hester.
According to police, Paylor was shot and killed Saturday, October 24, 2020 in the 400 block of Northwest Second Street in Reserve.

At about 8 p.m. Saturday night, officers responded to a call of shots fired in the area. Upon arrival, officers did not find any evidence of shell casings, but they did discover a vehicle still running with no one inside. Officers canvassed the area, but, in the darkness, were unable to locate the driver. According to Tregre, officers ran the registration and license plate numbers and contacted the family of the owner. The family advised police that the young man in possession of the car should be at work. However, he never arrived at work.

The next morning, Paylor’s body was found in a six-feet deep ditch, about 40 yards away from the vehicle. No motive is known at this time, and the investigation is ongoing.

Anyone with information about this murder is encouraged to call the St. John the Baptist Parish Sheriff’s Office TIPS line at 985-359-TIPS or the Criminal Investigations Division at 985-359- 8769. Citizens can also submit tips on the Sheriff’s Office website at http://stjohnsheriff.org/submitatip.php.

West Bank gets its 1st Pumpkin Patch this weekend