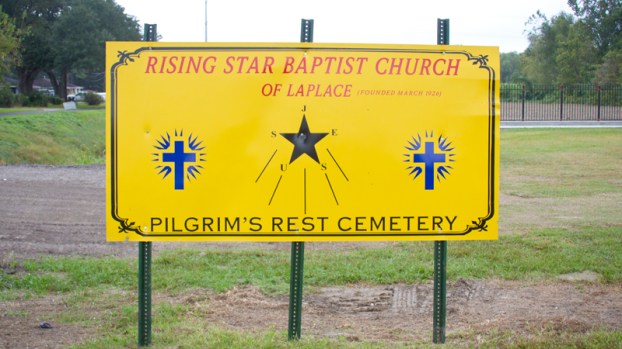 The sign for the new Rising Star Baptist Church “Pilgrim’s Rest Cemetery” is on Cardinal Street across Airline Highway from the church.

LAPLACE — Rising Star Baptist Church acquired five acres of land for the construction of a new cemetery in LaPlace, which will soon serve as a location for congregation members to bury their deceased.

Pastor Donald August said the cemetery grounds are the manifestation of a years-long goal. Construction is ongoing on Cardinal Street, just across Airline Highway from Rising Star Baptist Church and the Historic Woodland Quarters.

“I’ve been pastoring for 26 years now, and I know ultimately that one of the goals we wanted to accomplish was to find a location where we could bury our deceased,” August said. “We know that cemetery space right now is at a premium. There’s not many places left, and the places that do exist are kind of pricey. We wanted to acquire some property. The door was open for us to purchase just over five acres.”

Rising Star Baptist Church is in the process of obtaining a certification from the Louisiana Cemetery Board. August anticipates the process will be complete within the next couple of months.

“The state has to issue a permit for modern day cemeteries,” August said. “Many of the older cemeteries were grandfathered in because they were developed before the Cemetery Board.” 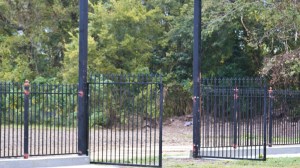 New iron gates are going up at the site of the cemetery in LaPlace.

According to August, there is an unmarked graveyard in the Historic Woodland Quarters that was never designated as a cemetery. The history of the neighborhood dates back to the operation of the nearby Woodland Plantation, which is opening to the public for the first time as the 1811/Kid Ory Historic House.

The red-roofed building on Highway 628 was once a sugarcane plantation and the birthplace of enslaved plantation workers. Woodland Quarters got its name as an abbreviation of “Woodland Plantation Slave Quarters” in the days when the enslaved labored in the fields.

The site became the origin of the 1811 Slave Rebellion, remembered as the largest slave uprising in American history. In 2019, a large-scale re-enactment paid homage to African American history and the fight for freedom in the River Parishes.

The new cemetery across Airline Highway is being erected on land that was once part of the Woodland Plantation Sugar Mill and Sugar Refinery.

More than a century after their ancestors worked on sugar cane fields, the families that call Woodland Quarters home now have partial ownership of a sugarcane field.

August said another part of the area’s rich history was the rise of pioneer jazz musician Kid Ory.

“Jazz musician Kid Ory was born on Woodland Plantation, and a number of people who played along with him in his band we believe were residents of the Woodland area. That’s another part of the history that we are still trying to research and uncover,” August said.

August also feels grateful that Rising Star families who have been united in life will now have a common resting place.

While the cemetery will be a Rising Star venture, August said it will be made available to non-members as well.

Rising Start Baptist Church was founded in March 1926. The church is located at 620 Cardinal Street in LaPlace, in the heart of Woodland Quarters.

“We celebrate our 95th year of existence in 2021,” August said. “We’re looking forward to a nice celebration next year.”