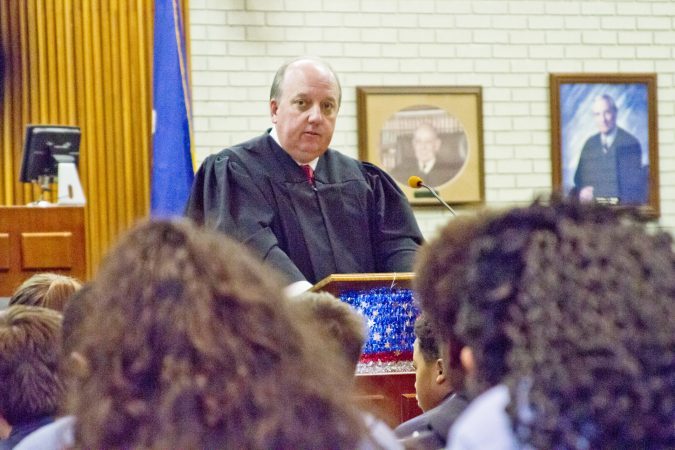 Former St. John the Baptist Parish Judge Jeff Perilloux, pictured during a 2018 Law Day presentation at the Edgard Courthouse, was sentenced this week to a combined 14 years in prison on three felony counts of indecent behavior with a juvenile and one misdemeanor count of sexual battery.

EDGARD — Former St. John the Baptist Parish Division B Judge Jeff Perilloux was sentenced to 14 years in prison on Monday, Oct. 19 for the conviction of three felony counts of indecent behavior with a juvenile and one misdemeanor count of sexual battery.

Ad-hoc Judge Dennis Waldron issued the sentence. On Thursday, Oct. 15, Waldron ordered Perilloux be taken into custody and described him as a potential danger to himself and the community. This order came shortly after Waldron rejected a motion for a new trial from Perilloux and his attorneys.

Attorney General Jeff Landry released the following statement following Monday’s sentencing:
“The road was not easy to travel, but today we finally arrived to justice for the young victims. I am proud of the hard work by AAG Matt Derbes, AAG Brooke Harris, and AAG Barry Milligan to ensure Mr. Perilloux was brought to justice. Sex offenses against children are the most serious of crimes, which cause permanent psychological harm. This trauma has been exacerbated by Mr. Perilloux’s continued refusal to admit and/or take responsibility for what he did to these young women, who were children when these crimes were committed. But I hope the sentence issued today will bring some comfort to the survivors and their families.”

Perilloux was convicted in September at the conclusion of a six-day jury trial in Edgard. The investigation into Perilloux’s criminal misconduct with his daughters’ teenage friends began in 2017 after authorities responded to allegations that Perilloux had inappropriately touched a 15-year-old during a Florida family vacation.

During the September trial, one of the young victims in the case recounted that Perilloux put his hands on her chest while administering a massage and, on another occasion, slipped his fingers into the front of her bathing suit bottom. The sexual battery conviction came from testimony that Perilloux reached into an 18-year-old’s shirt to apply vaporub at his LaPlace home.

Perilloux maintained his innocence during the duration of the investigation and the jury trial.

In May 2018, Perilloux was placed on paid leave. Perilloux officially resigned from the bench late last month, following his conviction.

Community members have questioned whether Perilloux will now have to pay back the salary he collected while on leave from the bench for more than two years.

Trina S. Vincent, public information specialist for the community relations department of the Louisiana Supreme Court, stated, “payment of salary during a period of interim disqualification is required by the Louisiana Constitution, Article V, Section 25.”

This article provides that, on recommendation from the Judiciary Commission, the Supreme Court may disqualify a judge from exercising judicial functions without loss of salary while proceedings are pending in the Supreme Court.

Therefore, Perilloux is not required by law to pay back his salary, as it was his Constitutional right to receive it.