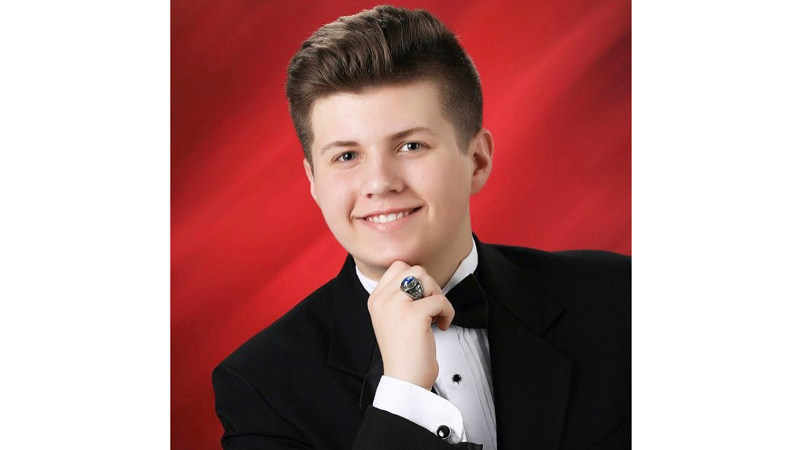 Zach Vicknair is a Riverside Academy senior and a skilled graphic designer/animator.

LAPLACE – Raised on Disney cartoons and animated films, Riverside Academy senior Zach Vicknair had no doubt from a young age that he wanted to be an animator who could bring drawings to life.

Vicknair’s talents were broadcast for the world to see when his animation was featured on DIY Conan, a special episode of the Conan O’Brien Show that invited fans to recreate their favorite scenes. While more than 300 runner-up submissions were NOT chosen for the final product, Vicknair’s animation made up a significant portion of the final program and was used to promote the show on Twitter.

Vicknair spent hours at PJ’s Coffee in LaPlace as he crafted the animation using the ProCreate app on his iPad. Editing was completed using iMovie.

“It took about the entire month of August to finish it,” Vicknair said. “When turning it in, I technically was unable to send it because I’m not 18 years old, a requirement of the contest. So I asked one of my great friends, Rajan Awasthi, to use his name to turn in the animation.”

On Sept. 21, Vicknair and his friends kept their eyes glued to TBS.

“While waiting for my scene to come up, I couldn’t do anything but feel extreme suspense and anxiety waiting to see if my animation made it. When it was finally in front of me, actually on television, I was completely stunned. I couldn’t believe something I made was really on such a great late night show as Conan,” Vicknair said.

Seeing the final product was very fulfilling. One month was a relatively short amount a time to pull together a winning animation, especially considering Vicknair worked on it by himself.

“I really enjoy drawing all the time, from the simplest doodles to the most intricate, detailed drawings. Animation is just a step up and making my drawing come alive,” Vicknair said.

Vicknair is known at Riverside Academy for his creative spirit, work ethic and humor.

Riverside Academy teacher Lori Lyons said Vicknair is mega talented, as are many of the kids in her multimedia class.

“He could teach the multimedia class. I am actually learning from him. He is exceptionally talented as an artist and a creator. He can draw, create graphics, do animations and put it all together,” Lyons said. “The sky is the limit for what he can achieve. Everything he does is done with skill and perfection. He doesn’t turn in anything that doesn’t meet his high standards. And he was pretty humble about this TV show submission.”

While Vicknair didn’t come into class shouting about his accomplishment, his friends made sure it was known. According to Lyons, Vicknair is part of a close-knit and supportive circle of friends who all get together after school to create videos.

“He’s a great student and a great kid. I’m so happy for him,” Lyons said.

Riverside Academy teacher Amy DiMaggio added, “Zach Vicknair is a highly creative, well-rounded young man who has a bright future ahead of him.”

Vicknair also serves as the drum line captain of the Marching Pride of Riverside. He is an active participant in annual school plays.

While the future is still wide open, Vicknair said he will major in graphic design and minor in video editing and animation if he chooses to attend college.

“The Conan contest has actually helped me in knowing that putting in the extra effort can mean the difference between getting what you want, or being left in the dust,” Vicknair said.

“I’m so thankful Conan and his judges let me be part of this amazing contest.”