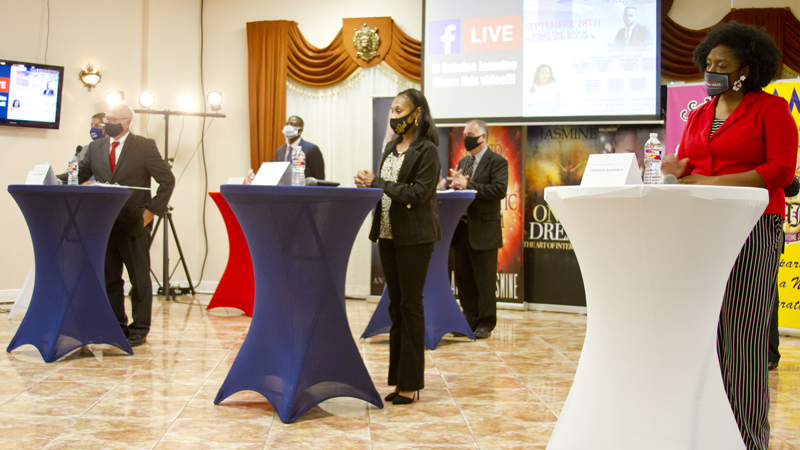 Candidates take their places Sept. 28 in LaPlace for a political forum as part of Church Meets Government: The Judge’s Seat.

A political forum hosted by Bishop Antoine Jasmine and moderated by Minister JaVon Ophelia Butler gave candidates an opportunity to share their platforms with the St. John the Baptist Parish Community. The forum was streamed live on social media, with some locals giving feedback to candidate responses.

He said the intent of the forum was not to sling mud, but to let candidates express their truth and passion within the community.

The following candidates were present:

To start off the evening, candidates had an opportunity to share their opinion on the separation between church and state.

Hayes stated that common themes exist between U.S. law and religion, including the principles that everyone should be treated fairly and that everyone is equal. This foundation is reflected in the principle “innocent until proven guilty” in the judicial system.

“The separation of church and state is a bit of a fallacy, because there’s truly no separation…There are those Biblical and religious principles that are in our laws today. It’s just a matter of asking if we appreciate them,” Hayes said.

Fiffie said separating the church and state is necessary so that judicial decisions remain fair and impartial, regardless of an individual’s faith.

Snyder said it is a Constitutional right that cannot be taken away, adding that its purpose is to protect citizens from the government.

Gravois and Miles view the separation of church and state from a historical context. The earliest settlers in what became the United States left their homelands because of religious persecution in regions where the church and the government were one and the same.

“There are some people that think there should be a firm line between the church and the state,” Miles said. “I don’t think that’s the way the Constitution was intended to be read. I think it’s a matter of saying I’m free to serve God the way that I choose. When you’re electing people, you want to know what their values are. You want to know their morals because we’re all human. We bring that into who we are and how we perceive issues and cases.”

Lewis referenced the recent appointment of Catholic Judge Amy Coney Barrett to the Supreme Court and how her religion has garnered both support and criticism among citizens.

“That is not new. That is par for the course,” Lewis said. “What we have to recognize and stand firmly on is that the U.S. Constitution is the supreme law of the land. We can’t bend it, we can’t defer from it. We have to uphold it.”’ 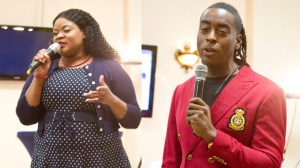 Each candidate also had a chance to respond to questions pertinent to his or her campaign, allowing viewers to get a sense of their personalities and values.

Jude Gravois said legality and fairness are at the core of the work he does for the Fifth Circuit. In more than 30 years of working in the field of law, he has never has any allegations of judicial misconduct or ethical violations.

Sharrolyn Jackson Miles hopes to bring her unique life experiences to the table at the Fifth Circuit Court of Appeals. She also spoke about the importance of attention to detail, since it has previously caused conflict at the appellate level when cases were overlooked.

Robert Snyder Jr. said he has the correct judicial temperament for the Fifth Circuit Court. He said he there needs to be more judicial oversight at the appellate level to ensure everyone is treated with fairness and respect.

Vercell Fiffie, who is running unopposed for Div. A in the 40th Judicial District Court, said he takes care to hear both sides of a story. Even in his everyday life, he is able to view a situation and “call a ball or a strike.” His experience working in Tokyo has taught him to be patient with others.

Nghana Lewis spoke about how social media creates distance and how there is no replacement for putting boots on the ground to reach the community. She was inspired by the late Supreme Court Justice Ruth Bader Ginsburg’s bold and brave leadership.

Eric Carter introduced his Carter Cares approach for families, communities, service and efficiency. His time in the military taught him it is okay to follow orders and to sometimes get to the back of the line and hold down the fort.

Dashawn Hayes said his best attribute as a candidate is that we is well-versed in the law. If elected, he would like to start holding small court matters at high schools to familiarize the youth with the judicial system.