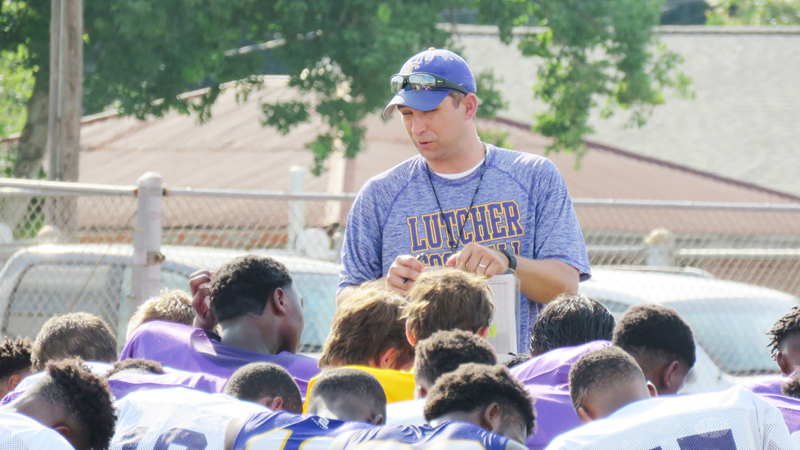 LUTCHER — Lutcher has had a tradition of skill guys, but now the team is being led by the offensive and defensive lines.

“We had this transition. You think about Lutcher, you think about the skill guys,” Lutcher coach Dwain Jenkins said. “One of the things we’ve seen over the last couple of years is that we haven’t had those high recruitable skill players. Our strength is going to be the offensive and defensive lines, which for 15 or 16 years, is something we’ve talked about, if we could get an offensive line.”

Last year, Lutcher had a 5-5 regular season and was defeated by Booker T. Washington, 47-21, in the first round of the Class 3A playoffs.

The Bulldogs started six sophomores on each line last season. Those players are now juniors.

Three of the offensive linemen who started as sophomores last year and are returning starters this season are Brandon Boudwin, Donald Flemming and Semaj Scott.

Boudwin will either play guard or center with Flemming and Scott at right guard and left guard, respectively.

Jenkins said that they have six players competing for the other two spots.

Continuing with the offense, running back Rasuan Storks comes back after a strong season. Storks recorded 10 100-yard rushing games in the Bulldogs’ 11 on his way to running for 1,239. He also made three catches for 24 yards. Storks scored rushing touchdowns and another receiving.

“We get a guy who’s used to carrying the load a little bit. He had a quiet 1,200 yards because we didn’t have the success we normally do,” Jenkins said.

The quarterback is sophomore Dwanyé Winfield.

Winfield started at receiver last year. He would be the leading returning receiver, but makes the move to quarterback. Jenkins said Winfield was scheduled to be the signal caller last year, but between injuries and a lack of depth, was forced to play receiver and did a great job. Winfield did get experience at quarterback last year in junior varsity and he started a varsity contest at quarterback.

Jenkins said Winfield is able to lead at a young age.

“He’s not afraid to tickle the phone and call guys to just go throw or just workout. When things were shut down, he’d get two or three guys and go run on the levee or go throw,” Jenkins said. “During the summer, after workouts, he’d get guys to go throw and get work. He’s got a chance to be one of those guys we’re used to having here, one of those top-recruitable guys.”

Lutcher will be young at wide receiver.

Junior Noah Detillier would have been a starter last year, but missed the season because of an injury. Jenkins said Detillier was a kicker as a freshman and will continue that role this season along with punting, kick return and punt return.

Jenkins said Detillier is a tremendous athlete, who is also a shortstop on the baseball team.

Defensively, the team has four players coming back on the line in Copeland Williams, Carter Poché, Ty Cooper and Dorrian Williams.

Jenkins said that all four played last year and will start. He added that there is a lot of pressure for the line to set the tone for the defense.

The guys in the secondary coming back are Robert Ursin, Marty Riley and Kurt Bottoms.

All of them played in different positions last year because of injuries.

T.J. Martin, Dawayne Miller and Ramohn Love are competing for spots in the secondary. Jenkins said they are older guys, who have groomed themselves to play.

Jenkins said that a spot where they have had a lot of injuries last year was at linebacker.

Tevin Long is a converted running back.

Junior Jarryn Darr started on junior varsity last year. He played special teams at varsity and is trying to win a linebacker spot.

Jenkins said that all of four of those guys are competing for starting linebackers.

Lutcher opens the season on Thursday, Oct. 1 against Frederick A. Douglass at home.