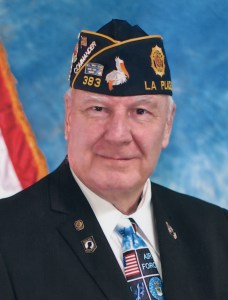 David Alfred Gatt aged 73, died on Tuesday, September 29, 2020. He was born in Detroit, Michigan on April 1, 1947 to Russell and Helen Gatt. He was the brother of Jane Maus (deceased), Virginia Espelund of Cheboygan (deceased), Michigan; Carol Ford of Howell (deceased), Michigan and Geraldine Gatt (deceased). He graduated from St. Mary of Redford High School Detroit, with additional credits from Northwestern University, Natchitoches, Louisiana. He served honorably in the U.S. Air Force as an Air Traffic Controller and did the same with the F.A.A. He was retired President of Specialty Marine Services of Lutcher, Louisiana and recently was employed at Bayou Ford in LaPlace, Louisiana. He was a member of MSGR Dennis Bergeron Council 5935 Knights of Columbus and Archbishop Blenk Fourth Degree Assembly #318. He was named Louisiana District Fourth Degree Sir Knight of the Year 2001-2002. Dave served for six years as Commander of American Legion Post 383 of LaPlace, where he revitalized the Post from obscurity to State prominence. He was devoted to veterans causes, and served in various District and Post positions. His great attribute was helping other veterans. He was honored as American Legion Department of Louisiana Recruiter of the Year for 2014-2015. He was also a member of the Veterans of Foreign Wars, Post 337 of LaPlace. He was a lover of auto racing and a student of Civil War History.

He is survived by his wife Penelope and daughters, Jacqueline and Tonya (Benjamin), as well as nephews and nieces.

Relatives and friends are invited to attend the visitation at St. Joan of Arc Catholic Church, 529 W. 5th St., LaPlace on Wednesday, October 7, 2020 from 9:30 a.m. to 11:00 a.m. followed by a Funeral Mass at 11:00 a.m. A rosary will be recited by his Brother Knights prior to Mass. Interment in the Southeast Louisiana Veterans Cemetery, Slidell, LA.