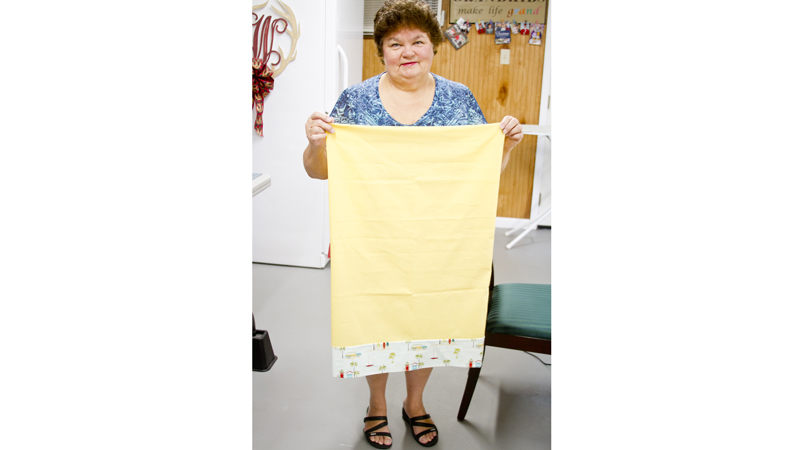 Loretta Webre holds a finished pillowcase that she created in approximately 10 minutes.

LAPLACE — With help from a network of local and nationwide supporters, a LaPlace family is making a difference in the lives of Hurricane Laura survivors one pillowcase at a time.

Loretta Webre has shipped more than 1,700 new pillows and custom made pillowcases to the Lake Charles region in recent weeks. It all started in 2016 when she and a friend from New Orleans worked together to make pillowcases for those who lost everything in the unprecedented Louisiana floods. 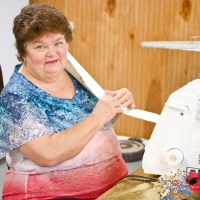 Loretta Webre uses her serger to sew a custom pillowcase at her LaPlace home.

Webre remembers children’s eyes going wide like saucers when she let them pick a favorite pillow. She didn’t need to see the recipients she shipped out to Hurricane Harvey victims in 2017 to know how much impact “the little things” can have.

“My friend remembered that when Hurricane Katrina hit, when she would go to sleep at night, the one thing she missed was her pillow. You don’t realize how something that seems so insignificant is really significant. It’s little, but it means so much to so many,” Webre said. “We dressed and sent 797 pillows to Hurricane Harvey victims in 2017. When Laura hit a few weeks ago, I decided we would do this again. Even though they are not flooded, so many have lost everything. It’s a matter of giving them a pillow to lay their head on at night.”

Webre took up sewing when she was 12 years old. The process is second nature to her, and she can make a pillowcase from start to finish within 10 to 20 minutes. The hobby has introduced her to friends across the country who are happy to help anyone in need. 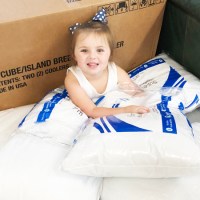 Webre has received pillow donations from as far away as Texas, Missouri and New Jersey. Monetary donations have come in from Mississippi, Arizona and other points across the United States.

Local friends who she’s been close to for more than 60 years will come by her house and sew stacks of 25 pillowcases at a time, working with incredible speed. The family room in the back of her LaPlace home has become a crafter’s studio and the mission control room for a momentous giving back effort.

Webre’s daughter, Dolores Montz, has been instrumental to Project Pillow. She irons every piece of fabric, making it easier to quickly sew the pillowcases together. Every pillow is shipped out freshly laundered and encased with plastic to ensure cleanliness.

Montz has enjoyed the way the project has brought her family together. 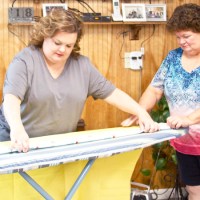 Mother and daughter duo Dolores Montz and Loretta Webre use an ironing board to press the newly-crafted pillowcases. 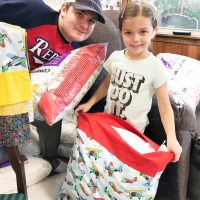 “This is the first time in 25 years that I’ve gotten to spend so much time with my mom. It’s been a great experience to reconnect as adults, not just as mom and daughter, but also as friends,” Montz said.

Webre’s grandchildren have done their part to help others in need. Montz said her 18-year-old son and 5-year-old niece have helped organize materials while preparing the fabric to be ironed. One of the youngest grandchildren, a little girl only 3 years old, knows that fabric needs to be sprayed before being ironed.

Truckloads of pillows have been delivered to St. Catherine of Siena in Metairie, St. Joan of Arc in LaPlace and St. Charles Borromeo in Destrehan for shipment to the affected areas of Lake Charles.

This past weekend, the Louisiana Feed crew transported 200 of the pillows to Lake Charles and prepared jambalaya for thousands of Laura survivors. The kindness displayed in Lake Charles was captured in a photo of a little boy smiling and hugging his new tractor-themed pillow in the backseat of a car.

Webre said this project is something she could never do alone.

“It truly takes an army to get something of this magnitude going. We’ve had money donations, pillow donations, fabric donations, time. It’s been a phenomenal undertaking, and I’m just blessed that so many have responded and come out and helped,” she said.

With Project Pillow winding down, Webre and Montz ask that anyone who wants to help hurricane survivors direct donations to Louisiana Feed. The Louisiana Feed crew can be reached on GoFundmeat gf.me/u/yupdgi or on Venmo at venom.com/LouisianaFeedCrew-LFC.