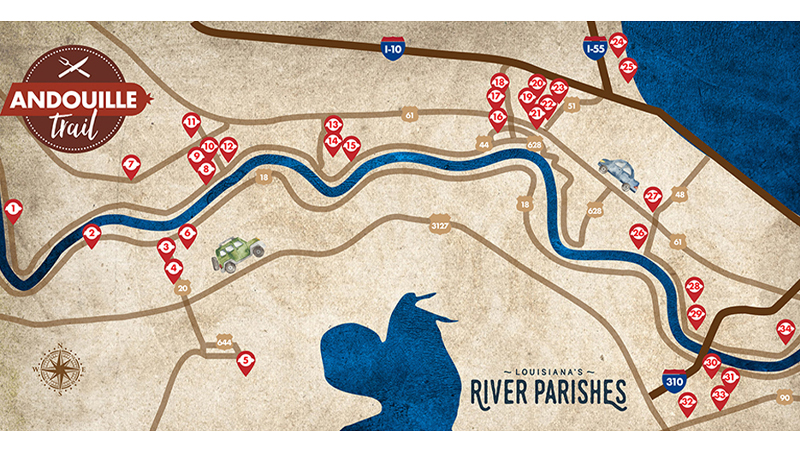 This map marks the locations of businesses on the Andouille Trail that spans St. James, St. John the Baptist and St. Charles parishes.

LAPLACE — Instead of cutting a ribbon, the River Parishes Tourist Commission is cutting a link of Andouille to celebrate the launch of a new culinary adventure along the German Coast.

The “link-cutting” ceremony of the new Andouille Trail will take place Tuesday at the St. John Community Center in LaPlace. Due to COVID-19 restrictions, the community is invited to watch the 3 p.m. event live on the Louisiana’s River Parishes Facebook page.

Andouille Trail passports are offered at all links on the trail, in addition to local visitor centers. Those who visit five stops on the trail and send in their passport with five receipts will receive a complimentary Andouille Trail wooden spoon perfect for cooking a roux. 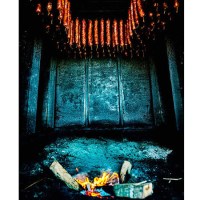 Buddy Boe, executive director of the River Parishes Tourist Commission, said a recent brand analysis revealed that the local food scene is a top three interest drawing visitors into the region. Other top interests included outdoor events and the history of local plantations and the enslaved.

Boe hopes the Andouille Trail will inspire intrigue and interest in the region. In addition to local branding, the River Parishes Tourist Commission is placing ads in foodie magazines like “Louisiana Cooking” and “Taste of the South.”

“As a region, we have multiple developed interests. You have the outdoors, the history of the enslaved and the plantations, the foodie scene, bonfires,” Boe said. “We’re proud of the diversity of the Andouille Trail. It’s on both sides of the river throughout the three parishes. It will grow, and we hope it inspires people who might not incorporate Andouille into their dishes to incorporate it and become part of the trail.”

Boe said the Andouille Trail is also a nod to the River Parishes’ German heritage. Next year marks the 300th anniversary of Germans settling in the area.

Andouille can be referred to as “a sausage with an identity crisis” because it is a German delicacy with a French name.

“Everyone did business in French here at one time, probably three generations ago. You had to call whatever you were selling a French name. This area was settled by Creoles and then settled by Germans, so there is a lot of German influence on our food and our culture,” Zeringue said.

An interactive wheel of the Andouille cooking process can be found at andouilletrail.com. The process starts with course-grinding lean meat, adding seasonings and adding savory ingredients. Next, an Andouille maker will stuff casings, hang the links and smoke the Andouille over wood until it is perfectly cured and ready to enjoy.

Spuddy’s Cajun Cooking Experience owner Spuddy Faucheux guides participants through the process while teaching them about the history of the cooking technique. Faucheux said Andouille is a source of intrigue because it has a different preparation and taste than a standard sausage.

“The Germans were the sausage makers. They would do a boucherie – the killing of the hog, and cut them into little pieces,” Faucheux said. “After they would smoke the Andouille, and they would actually hang it on their porch. It would hang, and it didn’t matter if you had flies on it or mildew on it or anything because it was preserved. When they needed a piece of Andouille, they would go to the porch, cut a piece, scrape the stuff off of it and use it to cook.”

Faucheux said there is no better place to experience Andouille than St. James, St. John the Baptist and St. Charles parishes.

“To get the good product, you have to come along the German Coast. This is where it was invented,” he said.

Many area restaurants used Andouille in their delicacies, ranging from Louisiana favorites like gumbo and jambalaya to inventive toppings for pizzas and potatoes.

Boe said the Andouille Trail is just one of the multiple products that the River Parishes Tourist Commission will be rolling out in the next couple of months.

Swamp Country and Bonfire Country will soon launch and will be followed by the 1811 Slave Revolt Trail in early 2021.

“The River Parishes Tourist Commission feels excited about this fall in spite of COVID-19,” Boe said.