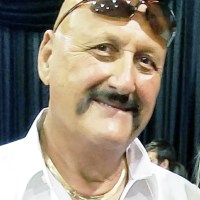 Anthony Joseph Valure “Tony / Big T” passed away on Sunday, September 13, 2020 at the age 70 with his family by his side. He was born in Independence on April 11, 1950 to the late Steve and Nancy Burregi Valure. He was also preceded in death by his father-in-law and mother-in-law, EJ and Zola Martin. Anthony is survived by his loving and adoring wife, Tanya Martin Valure; sons, Jason Valure and wife Becky, Richie Vial, and Elzey Vial; daughters, Jennifer Valure and Addie Melancon; grandsons, Mason Valure, Maguire Valure, and Alexander Melancon; granddaughters, Mackenzie Valure, Gianna Byntli Valure, Aubrey Melancon, and Gigi Vial; and his cat, Esta Anne. Tony worked hard as a Quality Control Inspector for Brown and Root and later for Turner for 50 years before retiring in 2017. His favorite pastimes were car shows, restoring cars, identifying makes and models of cars, working out, and spending time with his family. He was a huge fan of NASCAR and drag racing! He’s definitely racing against his #1 hero, Dale Earnhardt, Sr. He also enjoyed watching Wheel of Fortune, The Sopranos and eating home cooked meals, especially Italian food. He loved God, listening to music, dancing, watching movies, visiting friends, and showing people the Superman that he was with his kryptonite handshake. He always enjoyed a good camping trip and he adored and was proud of his children and grandchildren. Relatives and friends are invited to attend a visitation in his honor on Friday, September 18, 2020 at Ascension of Our Lord Catholic Church, 1900 Greenwood Dr., LaPlace from 9:30 AM until funeral time. A Mass of Christian Burial will take place at 12:00 noon. Interment will follow at St. Peter Cemetery. In lieu of flowers, masses in his honor are preferred.

Rose Lynn Funeral Services has been entrusted with handling his arrangements.