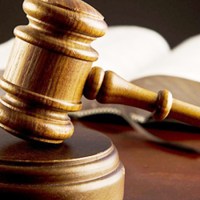 EDGARD — Div. B Judge E. Jeffrey Perilloux wore a gray suit, blue shirt and a red tie Friday as he maintained his innocence on the witness stand in Edgard.

Charged with three felony counts of indecent behavior and one misdemeanor count of sexual battery, Perilloux denied every claim that he acted in a lewd or lascivious manner with underage females to gratify his sexual desire. He stated that he thought of the young alleged victims in this case as family and treated them the same way he treats his two daughters.

Perilloux’s daughters, now 18 and 20 years old, testified Friday in defense of their father’s character and actions. The accounts provided by the Perilloux family differed from the testimonies of the alleged victims earlier in the week, especially when it came to how much physical contact Perilloux had with the young females.

The Attorney General’s Office is prosecuting this case due to Perilloux’s status as an elected official in St. John the Baptist Parish. Both the prosecution and the defense have rested their cases. Court will reconvene at 9 a.m. Saturday at the Edgard Courthouse for closing arguments and jury deliberation. A verdict is expected Saturday afternoon.

Friday focused on the defense as Perilloux, his ex-wife, their daughters, Okaloosa County police officers and a child sexual abuse expert provided testimony.

Perilloux talked about his prior DUI charges, noting he pleaded guilty in those cases and underwent rehabilitation. He said he hasn’t had an alcoholic drink in the past 10 years.

He talked about his relationship with Alleged Victim 1, who reported that Perilloux touched her stomach, slid his fingers into her bathing suit bottoms and repeatedly asked to “do her top” during a July 2017 vacation to Fort Walton Beach, Florida. Alleged Victim 1 also stated that Perilloux gave her inappropriate massages in his LaPlace home on two occasions in the early summer of 2017, including one in which he allegedly had his hands over her nipples for 20 seconds.

Perilloux denied ever touching Alleged Victim 1’s chest. He said the massages could be more accurately described as “shoulder rubs” and that he would never initiate it without Alleged Victim 1 asking first. According to Perilloux, there were numerous occasions when Alleged Victim 1, after complaining of a stiff neck and shoulders, would call out “Papa J” and tap her shoulder to indicate she wanted a massage.

In her testimony earlier this week, Alleged Victim 1 stated that Perilloux would offer to give her massages.

“(Alleged Victim 1) was absolutely like a member of my family. I treated her just like my daughters,” Perilloux said Friday.

Perilloux and his younger daughter recounted the series of events that took place in Florida.

She stated that she backed away as Perilloux told her not to be scared and repeatedly asked to undo her top, adding he was “this close to saying yes” to the curfew extension. Alleged Victim 1 said nothing more happened before Perilloux told her “fine, do whatever you want” and laid back in bed.

Perilloux supported his daughter’s testimony of that night. He remembers Alleged Victim 1 and his younger daughter coming into the room around 9 p.m. to ask for the extension, which was denied. Perilloux recalls falling asleep and being awoken around 11 p.m. by Alleged Victim 1 saying “Papa J, it’s me (name redacted)” and repeating “please, please, please” as she once again requested the curfew extension.

Perilloux told the court he was laying on his side as he reached over to grab his phone. He said it is possible he may have bumped into Alleged Victim 1 in the process, but he cannot be certain. According to his testimony, he told Alleged Victim 1 they could have 30 more minutes on the beach, and she left the room.

Perilloux also addressed the situations surrounding the other alleged victims in this case.

Perilloux’s older daughter testified to the alleged sexual battery incident that reportedly involved Perilloux rubbing Vic’s Vaporub on the chest of an 18-year-old girl and touching the sides of her breasts in the process.

Perilloux’s daughter said her father did in fact apply the Vaporub during a sleepover in December 2017, but she clarified that it was only applied to the top of her friend’s chest and not by her breasts. Perilloux said he slightly pulled the top of Alleged Victim 3’s shirt away from her skin to apply the medicine but was adamant that he did not reach into her shirt or touch her breasts.

Perilloux’s 20-year-old daughter said she has lost lifelong friends as a result from the allegations in this trial. She stands firmly by her father during this difficult time.

“I’m just so proud of him for everything that he’s gone through. He’s been so good about it,” she said tearfully. “It’s difficult to see someone you love so much go through something so horrible. I still love him. I love him even more now with what he’s going through. I’m proud to be his daughter regardless of what anybody else thinks.”

The prosecution also addressed text messages sent between Perilloux and his daughters’ teenage friends between 2015 and 2017. Many included well wishes on school and athletic accomplishments. One text message shown to the jury allegedly included a photo of Perilloux’s legs sent to Alleged Victim 1. Perilloux said the only intention of this text was to make Alleged Victim 1 laugh.

Another teenage witness who was part of the Florida trip testified for the prosecution earlier this week. She stated that Perilloux invited her to the beach trip and, on another occasion, approached her at work and gave her $100 for no apparent reason.

Perilloux said the $100 was a reward to her for making the honor roll and for wearing his campaign T-shirt. He admitted to inviting the teenage witness to the Florida trip and said his reasoning was that the girl worked and swam with his daughters over the summer.

The jury viewed a police video filmed outside the condominiums in Fort Walton Beach the night Alleged Victim 1’s parents called the police and came to pick her up.

Aldridge said it is possible for teenagers to misperceive a benign act and to truly believe false allegations. In forensic interviewing, she said it is important to look out for peer pressure since hearing something bad about an individual from a friend could contaminate a teenager’s memories of their interactions with said person.