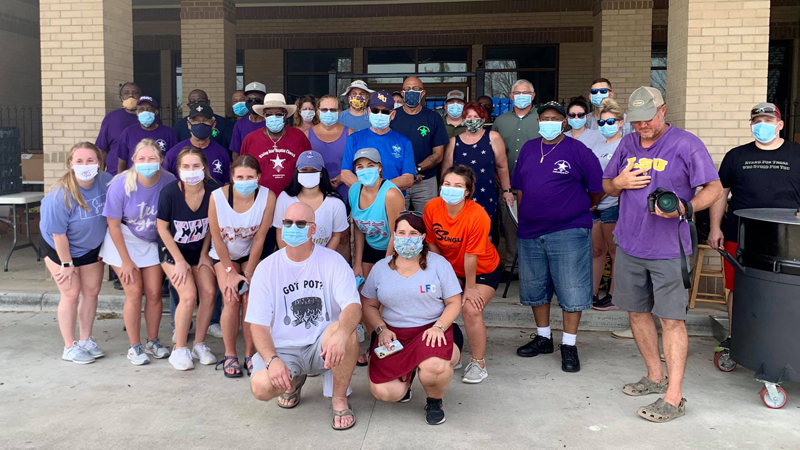 Volunteers with the Louisiana Feed group and members of Rising Star Baptist Church in LaPlace traveled to Lake Charles over the weekend to provide relief to victims of Hurricane Laura.

LAKE CHARLES – A plate of food can be a glimmer of hope for a family faced with a natural disaster. That’s what a team of locals from the Marathon Garyville Refinery learned when they supplied jambalaya lunches to more than 7,000 Louisianans in the aftermath of the 2016 floods.

The 2016 Louisiana Feed team replicated that effort this past weekend by serving jambalaya and white bean lunches to thousands of people impacted by Hurricane Laura. The guys made a stop by Our Lady of Heaven School in Lake Charles on Saturday before traveling to Hackberry Community Center in Cameron Parish on Sunday. 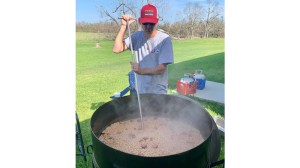 This pot of white beans was able to feed 1,000 people.

The core members of the 2016 Louisiana Feed group include Eddie Hitt, Brent Waguespack, Michael “Killa” Roussell, Matthew “Suga” Louque and Chucky Louque of the Marathon Garyville Refinery, in addition to Aimey Tregre and Todd Scioneaux. However, organizers said the hurricane relief trips are truly a community effort that would not be possible without the outpouring of support seen from compassionate neighbors.

The Louisiana Feed group received approximately $12,000 in donations to aid Hurricane Laura relief efforts. Many of the donations have come from local friends and businesses, though some have traveled from as far as California.

Massive pots of jambalaya made possible from these donations can feed up to 1,000 people. An additional trip to the impacted area is planned in the near future to reach as many people as possible.

Hitt remembers traveling to Houston after Hurricane Harvey and seeing the reactions of the community. He will never underestimate the power of a homecooked meal or a listening ear.

“People just want to tell their story. They hug you. You do everything you can to try to make a difference,” Hitt said. “They are so appreciative of just a meal and that we would go out of our way to travel and to cook for them. It may seem like a plate of food, but it’s actually like a glimmer of hope and some incentive for the next three or four hours for them to go back to the destruction and face the battles they are fighting after the storm.” 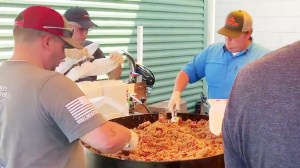 The Louisiana Feed crew is pictured cooking up jambalaya lunches at the Hackberry Community Center in Southwest Louisiana.

“We do this because it’s fun for us. We’re all friends, and we travel well together and enjoy doing it. Just to go on Facebook and see the outpouring of people dragging trailers and trailers of supplies down there is really inspiring with everything they’ve got going on in the world,” Waguespack said.

“It’s sad that we have to fight the floods, but it really shows the grit of the communities and that we take care of each other. I’m sure that if it would have come in our direction and if we would be in their shoes, they would be heading this way and cooking and bringing supplies to us.”

Waguespack said the 2016 Louisiana Feed Facebook page tracks every relief effort to show the impact donations have. The community can follow the local chefs’ journey through photos and videos posted on-site.

“When we started out, we figured there would be some scam artists out there,” he said. “We wanted to be as transparent as possible. That’s why we put the Facebook page together. Each time we cook, Eddie makes videos so people can go watch the videos and see the pictures as we progress during the day and see what their donations are doing.”

Hitt is appreciative of the many ladies in the community who made thousands of cookies, cakes and other sweets to donate with the lunches. Matherne’s Market was among the businesses that provided the supplies needed to give back.

The Louisiana Feed team is planning to return to the Lake Charles area soon. Those who would like to contribute can direct donations to Venmo (https://venmo.com/LouisianaFeedCrew-LFC) or GoFundMe (https://gf.me/u/yupdgi).