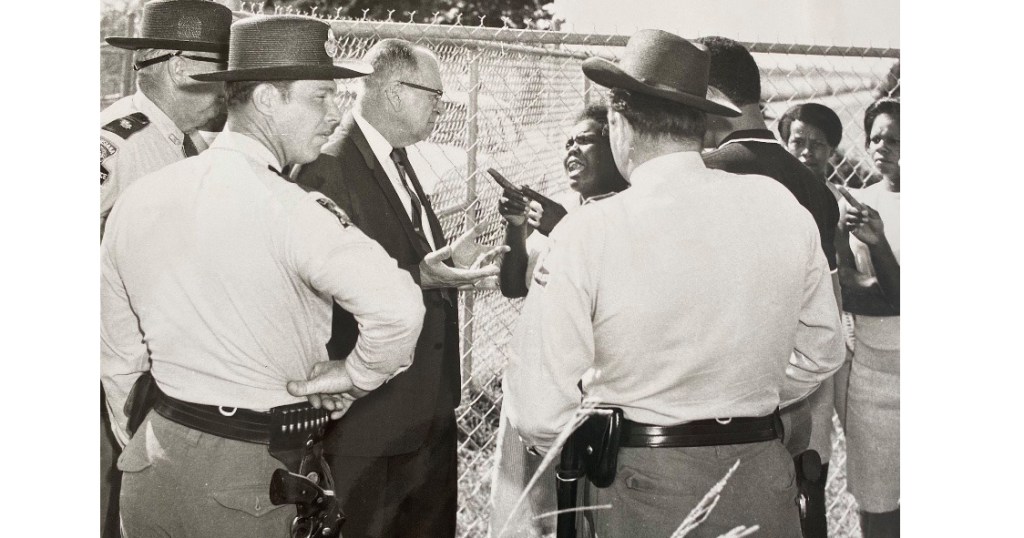 Orabell Williams Roybiskie, a staff member at Second Ward High School in Edgard, points a finger at Louisiana State Police troopers during an August 1968 protest prompted by the firing of two teachers.

EDGARD — Whitney Plantation executive director Ashley Rogers was browsing Ebay when she found a stash of photos from a 1968 school-based St. John the Baptist Parish protest.

The photos were from a Times Picayune archive. Inscribed on the back of each photo were the words, “Defying orders of police to leave the school grounds, students protesting the firing of two teachers remain on the premises of Second Ward High School in Edgard.”

Rogers enlisted the help of Dr. Joy Banner and Betty Joseph to identify the individuals in the photos, several of whom are still a part of the close-knit West Bank community.

During a Zoom conference held this week, participants of the 1968 protest joined Whitney Plantation leaders to reflect on the history of resistance along the Mississippi River and how it informs activism today.

“We really wanted to highlight that what happens now is part of a long tradition,” Rogers said. “Young people now and the people who are demonstrating now are drawing on these older traditions. It also highlights rural stories. A lot of times, we think about things that have happened in the city, and we leave out the stories of rural youths and adults who have participated in demonstrations.”

One photo depicts a group of girls from Second Ward High School gathered on the levee. Another shows teens lined up on school grounds, and a third photo depicts a mother pointing a finger at Louisiana state troopers.

The school protest took place in August, just a few months after the assassination of Dr. Martin Luther King Jr. Demonstrations were taking place across the country, though Donnie Roybiskie doesn’t recall being too in tune with the Civil Rights Movement at the time. He was a senior at Second Ward High School when athletic coaches Henry Schofield and Hillary Bossier were fired from the school, and it opened his eyes to the injustices that separated Second Ward High School from the white Edgard High School.

While integration was beginning in St. John Parish, the two West Bank high schools were far from equal. Black students at Second Ward received hand-me-down textbooks, and school facilities including bathrooms were in poor condition.

Roybiskie was among approximately 150 students who made their voices heard during the school demonstration.

“Mr. Bossier came here from New Orleans. During his time teaching, he realized the books weren’t up to par. Coming from Southern University, he started telling us everything was inadequate,” Roybiskie said. “People listened to him. When we started to look at it, we realized we were being short changed on a lot of things at the school.

“Even though we were graduating, we knew we had to make it better for the kids coming behind us. We organized the sitting. We went out and sat by the front lawn and refused to go to class.”

Virgie Johnson spent her elementary and middle school years in parochial school prior to transferring to Second Ward High School her freshman year. She was used to integrated classrooms and cafeterias that were separate but never felt equal.

When the Second Ward seniors asked her to leave class for the demonstration, she had something to believe in. She recalls a lot of the teachers and parents stood up for the cause as well, stating that their children deserved better. Despite limited resources, Johnson said the community has always been passionate about standing up for education.

“Going to Second Ward was a very fulfilling experience because of the closeness that everybody shared. Even though the educators did not have all of the supplies and tools needed, they made certain that they provided us the best education that we were afforded,” Johnson said. “They went into their pockets and they bought supplies so we would not lose out on anything.”

Betty Joseph was still in grammar school in 1968, but she noticed a familiar face when examining the photos. Actually, it was a familiar finger – the very same finger that used to point at her and her brother whenever they got into trouble.

Joseph remembers her mother sharing stories from her youth. Growing up in St. John Parish, Orabell Williams Roybiskie had to walk on the levee to get to school while white children rode the bus. As an adult, she became a cafeteria manager and teacher to the next generation of students.

Joseph said her mother was especially bothered by the glaring differences between Second Ward and Edgard High school.

“It really haunted her and angered her, and she had this no stopping attitude that regardless of what it took, she wanted to make a better environment for the students,” Joseph said.

The spirit of the seniors and teachers left a lasting impression on Johnson. Three years later, her graduating class refused to accept diplomas from the hand of the superintendent at the time. Instead, they grabbed the diplomas from the ground.

“Stand up and take part,” Johnson said. “You have to get into good trouble to be able to correct the bad trouble. Stay abreast of what is happening now because history is repeating itself.”

“Edgard is a community of people. When you do things as a community, the fear is gone. You’re not afraid of anything. It gives you strength,” she said.

For more information, visit Whitney Plantation on Facebook or call 225-365-3300.